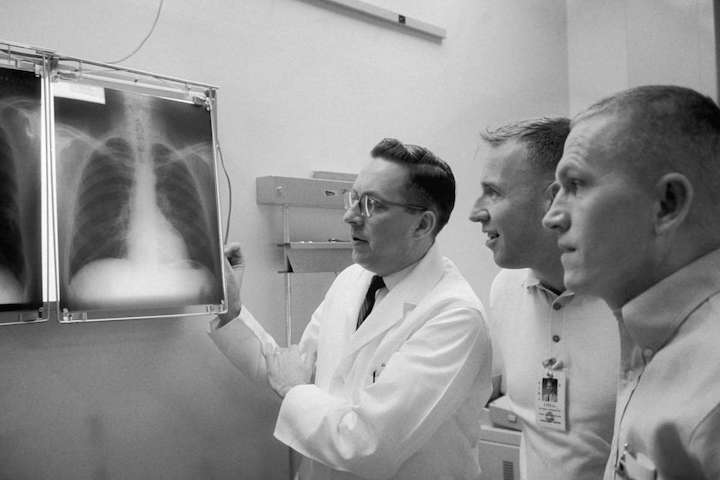 Dr. Charles “Chuck” A. Berry, a NASA flight surgeon who helped select the country’s first astronauts and devised tests to see if they could survive the demands of space, died in his sleep over the weekend in his Houston home. He was 96.

Berry is considered a pioneer in aerospace medicine, with a 68-year career in which he served as a flight surgeon for the U.S. Air Force, director of life sciences for NASA, an aviation medical examiner for the Federal Aviation Administration and an aerospace medicine consultant.

This was where his career took a turn that would eventually prompt Berry to leave the Air Force for NASA.

In 1957, Berry was one of the physicians who helped select test pilots — later referred to as astronauts — who would ride in a military rocket into outer space. He then helped select NASA’s first seven astronauts for Project Mercury, the country’s first man-in-space program.

Berry and his fellow physicians devised ways to physically test who could withstand the demands of space, as it was understood at that time.

“We put them in (a chamber) in the dark and suspended them so that they weren’t touching anything,” Berry said in a NASA Johnson Space Center oral history project. “They were suspended with wires, and left them in there for six hours in the dark. Now, that’s dumb when you think about it, because the thing I didn’t like about it, I said, ‘If we ever have an astronaut in this position, that means that we’ve really had a failure somewhere and he’s out of a spacecraft, and it isn’t going to make a lot of difference anyway then. So this doesn’t seem like a very realistic kind of thing to do.’ But we exposed them to heat and cold and ran them on treadmills which were not being used anywhere else at that time. Exposed them in partial pressure suits.”

And they figured out ways to monitor astronauts’ health before they launched — even telling former President Richard Nixon that he could not break the astronauts’ quarantine by eating dinner with them before Apollo 11 — and while in space.

Still, people questioned if humans could survive the journey, citing a lack of data.

“There are a lot of people who didn’t think it was OK and that we were really being pretty cavalier about the decisions that were being made,” Berry had said.

Michael Berry said his father acknowledged the lack of data but knew some risks would be required.

“I remember him saying, and I have quoted that on numerous occasions, ‘If we wait for all the data to come we’re never going to leave the ground,’” Michael Berry said.

He said his father took incremental steps, slowly increasing the amount of time astronauts spent in space, until landing men on the moon with Apollo 11 in 1969. Berry helped send those astronauts to the moon and monitored the crew during their mission. He helped send 42 people into space over 30 missions while working for NASA until 1974.

“Dr. Charles Berry was a founding member of the NASA family who will be greatly missed,” Johnson Space Center Director Mark Geyer said in a statement. “From playing a key role in selecting the original seven Mercury astronauts, to providing personal medical support from Mission Control for Apollo missions, to a distinguished career in Houston after departing NASA, Chuck was a unique person who made an indispensable contribution to human space flight.”

After leaving NASA, Berry became the first president of the University of Texas Health Science Center at Houston. He did on-air health segments at KPRC and was president of the Aerospace Medical Association. Berry was nominated for the Nobel Prize in Physiology or Medicine in 1979 and 1980.

But it was the relationship he had with astronauts that inspired his son to go into aerospace medicine. Michael Berry was a flight surgeon with the Air Force and then a flight surgeon with NASA, where he helped select astronauts for Space Shuttle missions and monitored them while in space. He spent 25 years working alongside his father in a private practice called Preventive and Aerospace Medicine Consultants and is currently the federal air surgeon for the FAA.

“He was my best friend,” Michael Berry said.

He is survived by three children, nine grandchildren and 15 great-grandchildren. There will be a viewing Sunday between 1 p.m. and 5 p.m. at Forest Park Westheimer Funeral Home. The funeral will be 11 a.m. Monday at Memorial Drive United Methodist Church, followed by a reception from 12:30 p.m. to 2 p.m. For his friends around the world, the funeral will be livestreamed at Memorial Drive United Methodist Church’s YouTube channel.