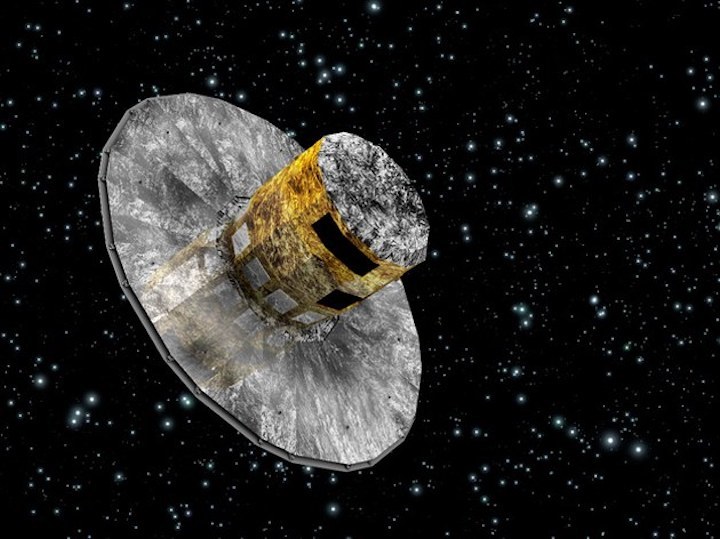 Astronomers have pondered for years why our galaxy, the Milky Way, is warped. Data from ESA’s star-mapping satellite Gaia suggest the distortion might be caused by an ongoing collision with another, smaller, galaxy, which sends ripples through the galactic disc like a rock thrown into water.

Astronomers have known since the late 1950s that the Milky Way’s disc – where most of its hundreds of billions of stars reside – is not flat but somewhat curved upwards on one side and downwards on the other. For years, they debated what is causing this warp. They proposed various theories including the influence of the intergalactic magnetic field or the effects of a dark matter halo, a large amount of unseen matter that is expected to surround galaxies. If such a halo had an irregular shape, its gravitational force could bend the galactic disc. The warp completes one rotation around the galactic centre in 600 to 700 million years. Our mother star, the Sun (shown in the animation as the small yellow dot) requires only 220 million years to complete one orbit.
Access the video

With its unique survey of more than one billion stars in our galaxy, Gaia might hold the key to solving this mystery. A team of scientists using data from the second Gaia data release has now confirmed previous hints that this warp is not static but changes its orientation over time. Astronomers call this phenomenon precession and it could be compared to the wobble of a spinning top as its axis rotates.

Moreover, the speed at which the warp precesses is much faster than expected – faster than the intergalactic magnetic field or the dark matter halo would allow. That suggests the warp must be caused by something else. Something more powerful – like a collision with another galaxy.

“We measured the speed of the warp by comparing the data with our models. Based on the obtained velocity, the warp would complete one rotation around the centre of the Milky Way in 600 to 700 million years,” says Eloisa Poggio of the Turin Astrophysical Observatory, Italy, who is the lead author of the study, published in Nature Astronomy. “That’s much faster than what we expected based on predictions from other models, such as those looking at the effects of the non-spherical halo.”

The star power of Gaia Gaia, with its unprecedented ability to measure the positions and velocities of a vast amount of stars, provides an entirely new level of understanding of the evolution of our galaxy, the Milky Way.
Access the video

The warp’s speed is, however, slower than the speed at which the stars themselves orbit the galactic centre. The Sun, for example, completes one rotation in about 220 million years.

Such insights were only possible thanks to the unprecedented ability of the Gaia mission to map our galaxy, the Milky Way, in 3D, by accurately determining positions of more than one billion stars in the sky and estimating their distance from us. The flying saucer-like telescope also measures the velocities at which individual stars move in the sky, allowing astronomers to ‘play’ the movie of the Milky Way’s history back- and forward in time over millions of years.

“It’s like having a car and trying to measure the velocity and direction of travel of this car over a very short period of time and then, based on those values, trying to model the past and future trajectory of the car,” says Ronald Drimmel, a research astronomer at the Turin Astrophysical Observatory and co-author of the paper. “If we make such measurements for many cars, we could model the flow of traffic. Similarly, by measuring the apparent motions of millions of stars across the sky we can model large scale processes such as the motion of the warp.”