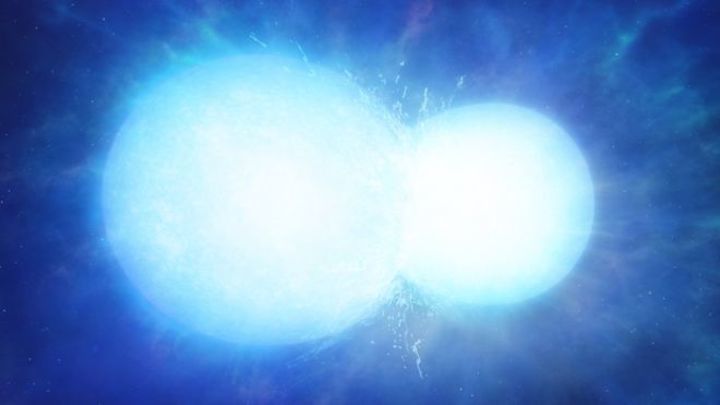 Researchers have discovered a huge snowman-shaped star with an atmospheric composition never seen before.

It is more massive than our Sun but only two-thirds the Earth's diameter.

The object is thought to have resulted from the merger of two so-called white dwarf stars that often explode as powerful supernovas.

"The most exciting aspect of this star is that it must have just about failed to explode as a supernova. There aren't that many white dwarfs this massive.

"There remains much uncertainty about what kind of stellar systems make it to the supernova stage. Strange as it may sound, measuring the properties of this 'failed' supernova, and future look-alikes, is telling us a lot about the pathways to thermonuclear self-annihilation."

A white dwarf is what stars like the Sun become at the end of their lives when they have used up all their nuclear fuel.

It loses most of its atmosphere, leaving a very hot core. The heavier atoms in its atmosphere sink, and the lighter ones remain at the surface. Some white dwarfs have almost pure hydrogen or helium atmospheres.

But this star, named WDJ0551+4135, has an atmosphere unusually rich in carbon. Dr Hollands said that initially these observations "didn't make any sense. The only way you can explain it is if it was formed through a merger of two white dwarfs".