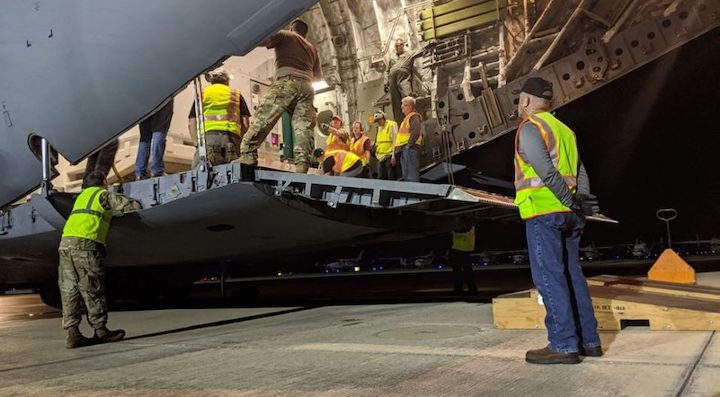 The April launch will be SpaceX’s second GPS 3 mission

WASHINGTON — The third satellite of the GPS 3 constellation arrived Feb. 5 at Cape Canaveral Space Force Station, Florida, where it will undergo final testing and checkout before its scheduled launch in April aboard a SpaceX Falcon 9 rocket.

The GPS 3 satellite was flown from Lockheed Martin’s assembly line in Colorado aboard a U.S. Air Force C-17 cargo aircraft.

In a news release on Friday, the U.S. Space Force Space and Missile Systems Center said the next steps are to prepare the GPS 3 SV-3 for propellant loading and fairing encapsulation before it’s horizontally integrated with a Falcon 9 launch vehicle.

The April launch will be SpaceX’s second GPS 3 mission (the first one launched in December 2018) and its second launch awarded under the National Security Space Launch program. The company delivered a new Falcon 9 Block 5 booster for this mission.

In keeping with a tradition of nicknaming satellites after famous explorers, the GPS 3 SV03 was named Columbus after the Italian explorer Christopher Columbus.

Lockheed Martin is under contract to build up to 32 GPS 3 satellites.

In January, SV01, the first first satellite of the GPS 3 constellation (Vespucci) was declared active by the U.S. Space Force 2nd Space Operations Squadron at Schriever Air Force Base, in Colorado.

GPS 3 SV02 (Magellan) launched in August aboard a United Launch Alliance Delta 4, has completed on-orbit testing and is waiting to be integrated into the constellation of 31 GPS satellites currently in operation.

After the launch of SV03 in April, the next one (SV04) is projected for later this summer. SV05 through SV09 are in various stages of assembly and test at Lockheed Martin’s production line near Denver. 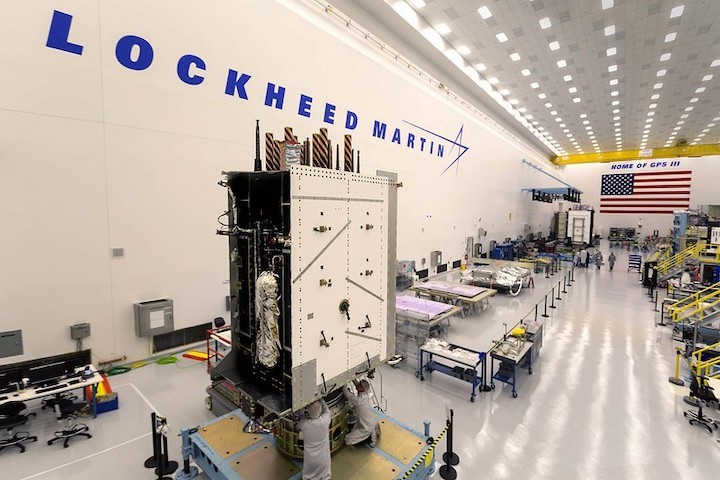 The Space Force has received its first GPS III satellite, with a launch slated for April.

The Lockheed Martin-built next-generation satellite, which was shipped to Cape Canaveral, Florida, on a C-17 from Buckley Air Force Base, Colorado, is the third GPS III to be delivered. The first launched in December 2018 and was set “healthy and active” by the 2nd Space Operations Squadron on Jan. 13, making it available for military and civilian GPS users. The second launched in August, has finished on-orbit testing, and is waiting its turn to be integrated into the constellation, Lockheed Martin said in a press release.

“We are excited to help the Space Force refresh the constellation to ensure U.S. and allied forces always have the best technology, and that the U.S. Global Positioning System remains the gold standard” for positioning, navigation, and timing services, Tonya Ladwig, Lockheed Martin program manager for GPS III, said in the release.

Lockheed is under contract to design and build 10 GPS III systems and up to 22 GPS III Follow-On systems. The fourth is set to launch this summer.

Next GPS satellite lands in Florida for April launch 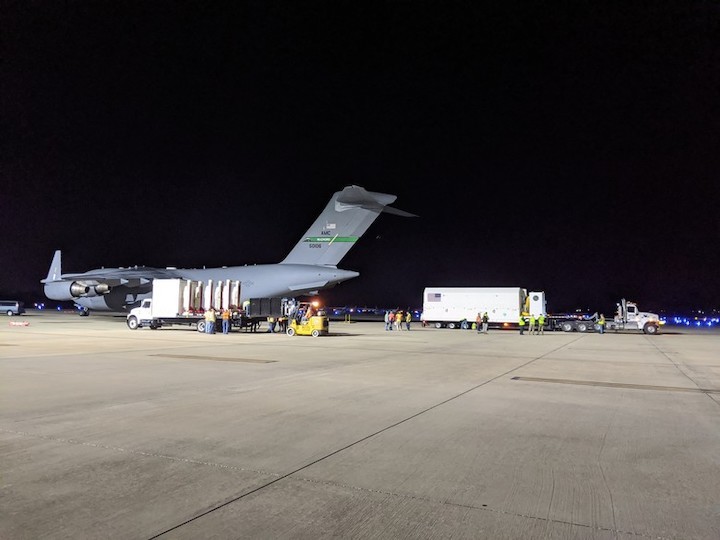 The U.S. Space Force’s third new-generation GPS 3-series navigation satellite has arrived in Florida for final processing and fueling ahead of a launch currently targeted for April 29 aboard a SpaceX Falcon 9 rocket.

The navigation satellite was trucked to the nearby Astrotech payload processing facility, where Lockheed Martin teams will configure the craft for launch, fill it with maneuvering propellant, and encapsulate the satellite inside a SpaceX payload fairing before moving to a nearby SpaceX launch facility.

Teams there will mount the payload horizontally to a Falcon 9 rocket before rollout and launch.

Liftoff of the GPS SV03 spacecraft is currently scheduled for April 29 some time during a four-hour launch period opening at 7 a.m. EDT (1100 GMT). An exact launch time will be announced later.

The GPS SV03 satellite is the third in the newest series of GPS navigation spacecraft, following the launch of the GPS 3 SV01 satellite in December 2018 aboard a Falcon 9 rocket, and the deployment of the SV02 platform in August 2019 by a United Launch Alliance Delta 4 rocket.

Both missions were successful, and the satellites are operating normally in orbit roughly 12,550 miles (20,200 kilometers) above Earth.

The GPS SV03 satellite is named “Columbus” after Christopher Columbus, the Italian explorer who visited the Americas on four expeditions beginning in 1492. The SV01 and SV02 spacecraft were named Vespucci and Magellan.

“The arrival of the third GPS 3 satellite is another landmark for the program and is a testament to the professionalism, hard work and dedication of GPS team members from all parts of the country,” said Col. Edward Byrne, chief of Production Corps’ Medium Earth Orbit Space Systems Division at the Space Force’s Space and Missile Systems Center. “The delivery of SV03 marks the start of our second GPS 3 launch campaign on a SpaceX Falcon 9 rocket and brings us another step closer in advancing the GPS constellation with more capable satellites.”

The GPS network provides positioning and timing services worldwide for military and civilian users, beaming signals relied upon by airliners, ATMs, drivers and smart bombs, among numerous other users.

Lockheed Martin is on contract with the Air Force to build up to 32 satellites, including 10 GPS 3 spacecraft and 22 upgraded GPS 3F satellites.

SpaceX officially has permission to perform a Falcon 9 booster recovery after its next launch for the US Air Force, now guaranteed to be the first time a rocket booster attempts to land during an operational launch for the US military.

Alongside their booster landing attempt confirmation, the USAF Space and Missile Systems Center (SMC) also posted the first official SpaceX video of a rocket acceptance test released in almost 2.5 years, a test it says was completed just days after the GPS satellite it’s scheduled to launch arrived in Florida. The very same Falcon 9 booster was shown off in unprecedented detail just last month and now SMC says that SpaceX fired up the rocket at its McGregor, Texas development facilities for a routine static fire on February 13th. The company is currently scheduled to launch its second USAF GPS III satellite – Space Vehicle 03 (SV03) – no earlier than 7am EDT (11:00 UTC), April 29th, a target set just days ago.

With the spacecraft in Florida and factory-fresh Falcon 9 booster successfully proofed, all that remains is for SpaceX to test and deliver the mission’s Falcon upper stage and payload fairing (if it hasn’t already). After the booster – believed to be B1060 – is inspected and its tanks are cleaned, it can also be packaged and transported by road the rest of the way to SpaceX’s Florida launch facilities, setting the company up for the critical mission and historic landing attempt.

While SpaceX has technically already landed Falcon 9 and Falcon Heavy boosters after its NROL-76 and STP-2 launches for the NRO and USAF, the company only officially began operational military launches once its Falcon 9 rocket was fully certified. STP-2, for example, was effectively high-stakes make-work designed to help the USAF fully certify SpaceX’s brand new Falcon Heavy rocket to launch expensive – verging on irreplaceable – military satellites.

Its first truly operational US military launch occurred in December 2018, when Falcon 9 booster B1054 was intentionally expended in support the USAF’s inaugural GPS III launch, successfully placing the first of 10 (or 32) planned upgraded navigation satellites into orbit. It’s believed that the USAF required such extreme safety margins (extra propellant and performance) that SpaceX couldn’t even attempt booster or fairing recovery. This made B1054 the first (and hopefully only) Falcon 9 Block 5 booster to launch without even the basic hardpoints needed to attach landing legs.

Effectively confirming that B1054’s demise was was a contrivance and by no means a technical necessity, the SMC announced on February 20th that SpaceX’s GPS III SV03 mission is officially “the first time a booster is planned to land on a drone ship during a NSS [National Security Space] launch.” Effectively identical to B1054 aside from the addition of grid fins and landing legs, this means that Falcon 9 booster B1060 will be able to attempt a landing aboard a SpaceX drone ship shortly after launch. 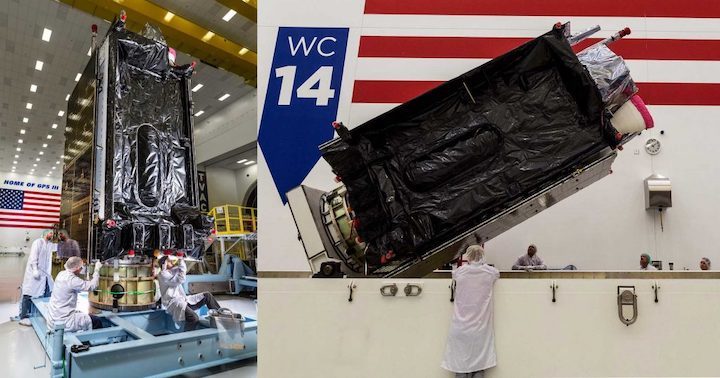 Just like GPS III SV01 satellite launched by SpaceX in December 2018 and the GPS III SV02 satellite launched United Launch Alliance (ULA) launched in August 2019, GPS III SV03 is a more than $500 million spacecraft designed to upgrade the US GPS navigation constellation. SpaceX has already won five (of five) competitively-awarded GPS III launch contracts thanks to its Falcon 9 rocket’s exceptionally competitive pricing, meaning that there is an excellent chance the company will win many more in the near future.

GPS III SV03 is one of 10 “Block IIIA” satellites to be launched between 2018 and 2026 and will be followed by another 22 “Block IIIF” satellites to be built by Lockheed Martin for ~$330M apiece. All 26 unassigned spacecraft will need launches of their own between now and the mid-2030s, worth anywhere from $1-2.5B to SpaceX if the company performs well on all five of its first contracts and continues to crush competitor ULA on launch costs.