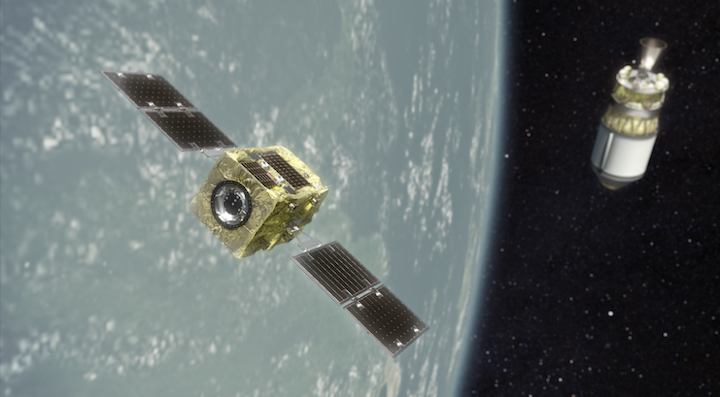 WASHINGTON — The Japan Aerospace Exploration Agency (JAXA) has selected Astroscale to send a spacecraft into orbit to inspect a discarded Japanese rocket upper stage, a step that would pave the way for a debris-removal  mission.

The contract gives Tokyo-based Astroscale until March 31, 2023 to complete the inspection mission.

If Astroscale is awarded a follow-on contract under JAXA’s Commercial Removal of Debris Demonstration 2 (CRD2) program, the company would be given until March 31, 2026 — the end of Japan’s fiscal year — to deorbit the spent upper stage.

Ron Lopez, president of Astroscale’s U.S. division, said Astroscale is finalizing a contract with JAXA expected to “cover the majority of the costs” associated with building, launching and operating the CRD2 inspector spacecraft. He declined to say how much Astroscale expects the mission to cost.

Lopez said JAXA will select the spent rocket body Astroscale’s CRD2 inspector spacecraft will be required to approach and observe as part of a data-collection mission meant to inform a follow-on removal mission.

Lopez said Astroscale anticipates being able to use its CRD2 inspector spacecraft for additional missions after fulfilling its JAXA contract. The Japanese upper stage will likely be in a congested orbit, he said.

Astroscale will rely heavily, but not exclusively, on Japanese partners to implement the inspector mission, Lopez said. The company has raised $140 million since forming in 2013, and has roughly 100 employees spread across Japan, Singapore, the United States, and the United Kingdom, Lopez said.

Astroscale is the second company in recent months to be awarded a contract for a debris-removal mission. In December, Swiss startup ClearSpace received a European Space Agency contract to deorbit a derelict rocket upper stage in 2025.

In January, Astroscale announced that it had been selected by the Tokyo Metropolitan Government’s Innovation Tokyo Project to receive a grant worth up to $4.5 million “to build a roadmap for commercializing debris removal services,”

Meanwhile, Astroscale expects to launch its so-called End-of-Life Service by Astroscale-demonstration (ELSA-d), later this year to demonstrate debris identification and capture operations before deorbiting itself. Astroscale contracted with Glavkosmos to launch ELSA-d on a Soyuz mission slated for the second half of the year.