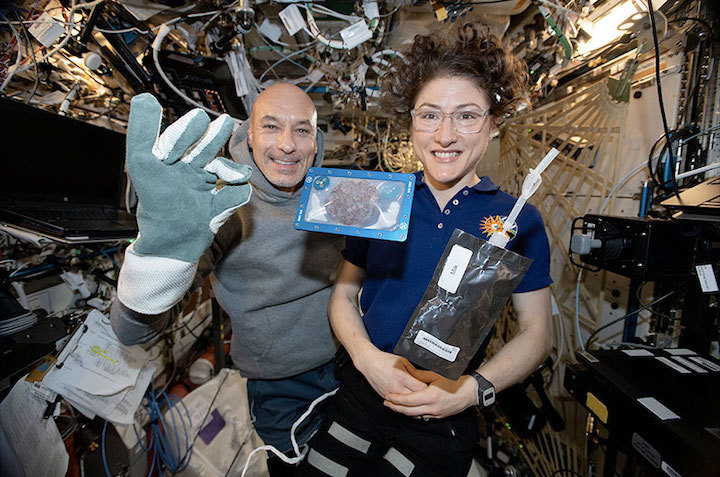 The first cookie to be baked in space may soon be bound for the Smithsonian.

DoubleTree by Hilton announced the results of the first-ever bake-off held off the planet on Thursday (Jan. 23), two weeks after three of its signature chocolate chip cookies returned to Earth from the International Space Station (ISS).

"Perfecting the baking process for our DoubleTree cookies took time, even on Earth, so we were excited to learn that our cookies appear to look and smell the same on the ISS as they do in our hotels," Shawn McAteer, DoubleTree's senior vice president and global head, said in a statement.

The baked-in-space cookies, which were made with the same dough that is used for the cookies guests receive when checking into DoubleTree hotels, still need to be examined by food scientists to better understand the performance of the oven in which they were prepared. After that study is complete, though, one or more of the cookies may join other examples of historic space food on exhibit.

"DoubleTree by Hilton plans to preserve the cookies where visitors can view them and learn more about this experiment and has offered to donate one to the Smithsonian National Air and Space Museum where it is being considered for collection," the hospitality company said in a press release.

The DoubleTree cookie dough for five cookies was launched to the International Space Station in November 2019, on the same commercial resupply mission that delivered the specially-designed oven needed to bake them. The Zero G Oven was created by Zero G Kitchen, a startup developing culinary appliances for use in microgravity, and Nanoracks, a space services company that for the past 10 years has been deploying payloads to the space station.

"We are thrilled to see our oven, the first part of the space kitchen we set out to build more than two years ago, be used to bake food in space for the first time," Ian Fichtenbaum, co-chef and co-founder of Zero G Kitchen, said in a statement issued by DoubleTree by Hilton. "We already know the results of this experiment are sweet, and we look forward to now understanding how our oven and the cookie findings may build a new frontier for hospitality."

The astronauts aboard the space station, including Luca Parmitano of the European Space Agency (ESA) and Christina Koch of NASA, oversaw the baking of the cookies, one at a time, over several days in December, adjusting the baking time for each.

The first cookie was placed into the 300 degree Fahrenheit (150 degree Celsius) electric oven for 25 minutes and came out under baked. The second and third cookies released a freshly-baked scent after being heated for 75 and 60 minutes, respectively.

"I can smell it, and I do observe some chocolate melting," reported Parmitano after removing from the oven the fifth cookie, which was baked at 325 degrees Fahrenheit (160 degrees Celsius). "But it certainly doesn't look like cookie dough anymore."

The time and greater heat needed to fully bake the dough was a surprise. By comparison, the average DoubleTree chocolate chip cookie bakes in a convection oven here on Earth for 16 to 18 minutes at 300 degrees Fahrenheit. The Zero G Oven uses conduction, rather than convection, to bake its contents.

"While we have initial visual and scent feedback from the crew aboard the ISS, we're excited to dive into fully understanding the baking results — including breaking down why the bake time and temperature in space varies from what we are used to seeing on Earth, as well as if the baking tray, which was designed specifically for microgravity, impacted the final shape of the baked cookies," said Nanoracks' senior internal payloads manager, Mary Murphy.

Three of the cookies that were baked in space were returned to Earth on Jan. 7 and are now being stored at Nanoracks' facilities in Webster, Texas. DoubleTree by Hilton is working with food science professionals to determine the best way to preserve the cookies for their long-term display.

"The innovation displayed throughout this experiment and emphasis on making long-duration space travel more hospitable underscores our ongoing commitment to ensuring guests always have a comfortable stay, wherever they may travel," said McAteer.

The National Air and Space Museum's collection committee will convene soon to decide if it will accept the offered cookie for exhibit.

"Because of the type of packaging, because of the contents, we don't yet know what the requirements for display and conservation will be, but I think that is worth exploring in terms of our long-term preservation [of the cookie] if we are to acquire it," Jennifer Levasseur, a curator at the National Air and Space Museum, said in an interview with collectSPACE.

If accepted, the DoubleTree cookie will join other space food in the Smithsonian's collection, including applesauce flown for astronaut John Glenn on the United States' first orbital spaceflight in 1962, brownies flown on the Apollo 11 first moon landing mission in 1969 and both Coca-Cola and Pepsi soda cans flown on the space shuttle Challenger in 1985.

"For me as the curator, if we are able to collect this, I think [the DoubleTree cookie] ranks pretty much near the top," said Levasseur, "in part because it exemplifies the balance between nutrition and psychology, something I speak about often in terms of our space food collection."

"We all know on Earth that food holds more of a place in our lives than just a nutritional place, it is also about the psychological effect it can have," she explained. "I think this cookie might be the best representation we could have of that, in that if you have gone to a DoubleTree hotel you would know that getting that cookie is a kind of a cool thing. I think, likewise, this being the beginning of a new path for space food, where we are now thinking about how to prepare food for space, not how to consume them alone, is a really big transition. This becomes a model for how things are made going forward." 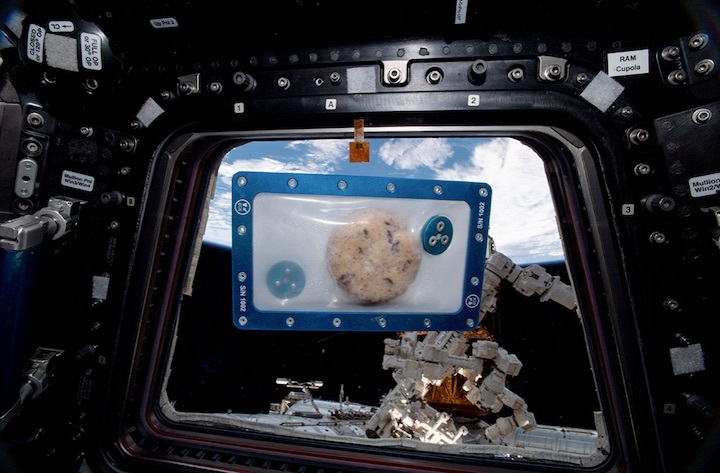