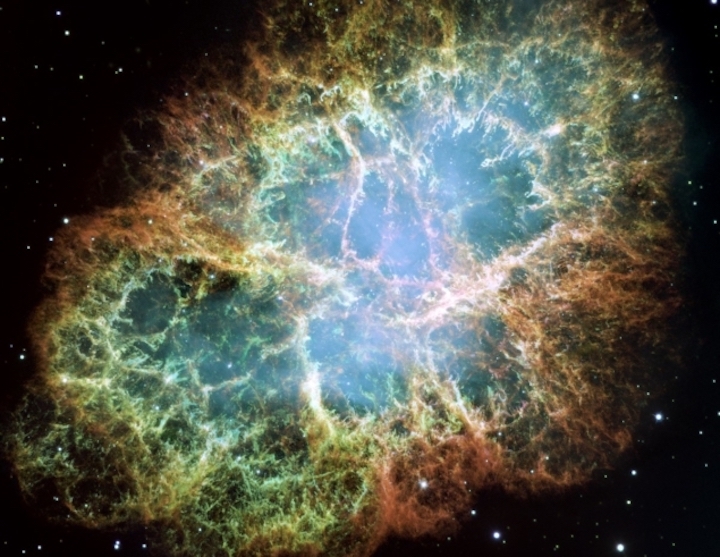 Intermediate-mass stars expire via thermonuclear explosions, rather than gravitational collapse, according to experiments and calculations done by an international team of astrophysicists led by Oliver Kirsebom at Dalhousie University in Canada. By measuring the rate of a “forbidden” nuclear decay that transforms fluorine-20 into neon-20, they were able to work out the rate at which neon-20 in a star will capture electrons in a stellar environment. This rate was much higher than previously thought, leading the team to conclude that such stars are more likely to expire in thermonuclear explosions

Intermediate-mass stars weigh-in at about 7-11 solar masses and are common in the Milky Way. Astrophysicists are confident that towards the end of their lifecycles, these stars have cores comprising mainly of oxygen and neon and eventually explode as supernovae. Until now, however, it has remained unclear whether the explosion is driven by gravitational collapse, as is the case for more massive stars, or through a thermonuclear explosion.

The key to solving this mystery lies in knowing the rate of electron-capture by ground-state neon-20, whereby neon transforms into fluorine-20. This process is a “second-forbidden” transition, occurring only incredibly rarely outside the extreme temperatures and densities of stellar interiors. Because the process is extremely rare in the conditions found on Earth, it had proven very difficult to study in the lab.

By doing experiments at the JYFL Accelerator Laboratory at Finland’s University of Jyväskylä, Kirsebom’s team has made the best measurement yet of this transition rate by studying the reverse process – the beta-decay of fluorine-20 into the ground state of neon-20. This was done by firing a beam of fluorine-20 nuclei into a carbon foil, where they are embedded. As the nuclei decayed, the team monitored the number of electrons produced with energies characteristic of ground-state neon-20 production.

While nearly all decays created neon-20 in an excited state, around 1 in 250,000 events created neon-20 in its ground state. While this is a tiny percentage, it is one of the strongest second-forbidden transitions ever measured. The next step was to use this information to calculate the rate at which ground-state neon-20 would capture electrons within a stellar environment.

This rate was found to be 100 million times higher than had been predicted by previous calculations. The led Kirsebom and colleagues to conclude that within intermediate-mass stellar cores, heating and oxygen fusion can occur earlier and at lower densities than previously thought. This means that instead of collapsing under their own gravity, the stars are more likely to expire through thermonuclear explosions, leaving behind white dwarfs containing mainly oxygen, neon, and magnesium.

By constraining the ground-state neon-20 electron-capture rate to within 25%, Kirsebom’s team has made a significant step forward in our understanding of the lifecycles of intermediate-mass stars. They will now use their results to explore the still poorly-understood role of convection in transporting energy outwards from stellar cores – something that increases the likelihood of gravitational collapse occurring.