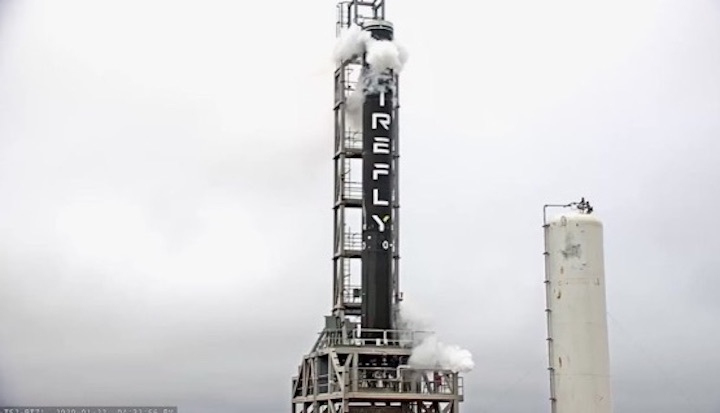 Firefly Aerospace confirmed a “test anomaly” resulted in a small fire on a vertical test stand in Central Texas Wednesday evening. The fire occurred during the first attempt at a full-scale qualification test-firing of a first stage for Firefly’s Alpha small satellite launcher.

In a statement issued Wednesday night, Firefly said the fire did not endanger any employees or local residents near the company’s test site in Briggs, Texas, located north of Austin.

“During testing this evening we experienced a test anomaly resulting in a small fire on our test stand,” the company said. “The fire was quickly extinguished by our fire suppression systems on the stand and the local community emergency response team quickly responded.

Firefly said in an initial statement late Wednesday that the test stand and Alpha first stage were intact after the fire.

Eric Salwan, a Firefly spokesperson, said Thursday that the company is still evaluating the condition of the first stage.

Firefly released a video later Thursday showing the fire, which developed moments after ignition of the first stage during a hold-down test-firing on a stand at the company’s Texas test site.

An image released by Firefly of the rocket on the test stand after the fire appeared to show no obvious signs of damage.

“We are carefully reviewing data, inspecting hardware … and performing root cause analysis to assess and mitigate the cause of the anomaly before we return to testing,” Firefly said.

Before the test-firing Wednesday, Firefly Aerospace tweeted an image of a first stage for the company’s Alpha rocket on a vertical test stand at the Briggs facility. In the tweet, Firefly wrote that teams were loading liquid oxygen into a test version of the company’s Alpha booster in preparation for the first hotfire qualification test of the rocket’s first stage.

Firefly later deleted the tweet after local authorities responded to reports of an “explosion” at the test facility in Central Texas, and ordered the closure of roads in the area and the evacuation of nearby residents.

Officials later clarified that no explosion occurred. Tom Markusic, Firefly’s CEO, told KXAN — the NBC television affiliate in Austin — that a fuel leak resulted in the small fire on the test stand. 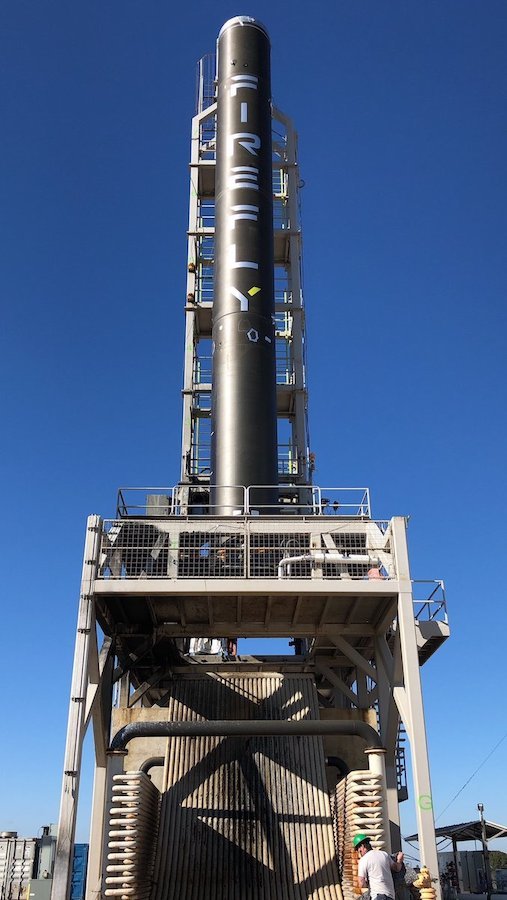 Firefly was gearing up for the first in a series of full-scale first stage hotfire tests on a vertical stand at Briggs to verify design and operation of the stage. The first stage of Firefly’s Alpha launcher, which the company previously said could be ready for a first flight this spring, is powered by four Firefly-built Reaver engines consuming kerosene and liquid oxygen propellants.

“At 6:23 p.m. local time, the stage’s engines were fired, and a fire broke out in the engine bay at the base of the rocket’s stage,” Firefly said in a statement Thursday. “The 5-second test was immediately aborted and the test facility’s fire suppression system extinguished the fire. The cause of the anomaly is under investigation.

“Firefly engineers are reviewing test data from the stage to identify potential causes for the test failure, and Firefly will share results of that investigation once it is complete,” the company said.

“Firefly is committed to workplace safety, and at no time during the test were Firefly operations personnel or the public in danger,” the company said. “Firefly is coordinating closely with local authorities and emergency response personnel as it investigates the anomaly and refines its contingency procedures.”

The first stage hotfire tests were expected to culminate in full-duration burns of all four Reaver engines lasting some 2 minutes, 45 seconds, the length of a first stage burn during a typical Alpha launch sequence. The four engines firing at full throttle generate more than 165,000 pounds of thrust, according to Firefly.

Firefly announced in November the completion of qualification testing on the Alpha’s second stage, which features a single kerosene-fueled Lightning engine.

Meanwhile, preparations to modify and outfit Firefly’s launch pad at Vandenberg Air Force Base continue ahead of the first orbital flight of the Alpha launch vehicle. Firefly plans to base its missions at Vandenberg from Space Launch Complex 2-West, where United Launch Alliance Delta 2 rockets launched before the Delta 2’s retirement in 2018.

Firefly’s Alpha rocket will be capable of hauling up to 1,388 pounds (630 kilograms) of payload to a 310-mile-high (500-kilometer) sun-synchronous polar orbit. Firefly, based in Cedar Park, Texas, says it expects to sell a dedicated Alpha launch for $15 million per flight.

The Alpha rocket is one of numerous new commercial small satellite launch vehicles in development, but Firefly’s launcher is closer to its debut flight than most others in the market segment. And Firefly says the size of its rocket — which can carry heavier payloads than Rocket Lab’s Electron or Virgin Orbit’s LauncherOne — differentiates it from other prospective launch providers in the smallsat launch market.

Firefly says it has more than 500 employees worldwide. 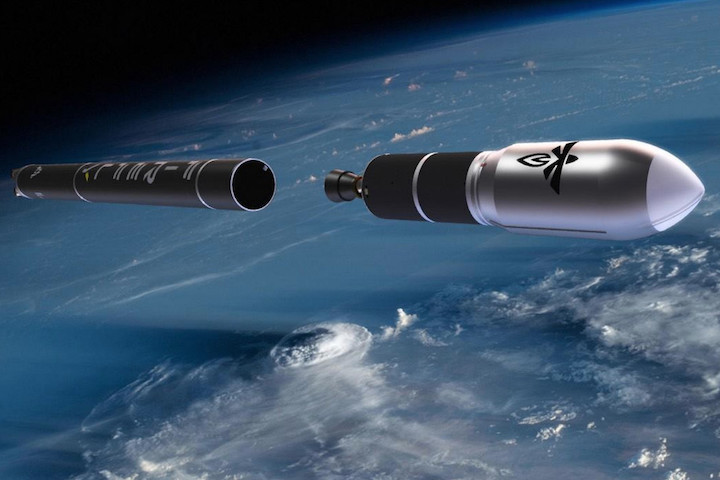 On Wednesday night, a fire broke out at Firefly Aerospace in Austin, Texas, while the company tested out the main engines on its newly developed Alpha rocket. The fire prompted a brief evacuation of people living within a one-mile radius of the test as well as road closures, but Firefly ultimately suppressed the flames, and no one was hurt. The company says its rocket and test stand are intact.

Firefly Aerospace is the resurrected version of Firefly Space Systems, a small satellite launch company in Texas that went bankrupt in 2016 following the Brexit referendum. Thanks to a new investor, the company came back as Firefly Aerospace and is currently developing its new Alpha rocket to launch small- to medium-sized satellites to space. Standing at 95 feet tall, the rocket will supposedly have the capacity to launch between 630 to 1,000 kilograms to low Earth orbit, according to the company.

Before last night’s accident, the company said it was about to conduct the very first hot fire test of the core section of its Alpha rocket, which entails holding down the vehicle on a test stand and igniting the engines. The test was slated to last just five seconds, and was meant to be the first in a series of tests aimed at verifying that the rocket is sound. The Burnet County Sheriff’s Office said it was informed of a “possible explosion” at 7:24PM ET, though Firefly later clarified that a fire broke out at the base of the rocket where the engines were located. Video of the event posted by a local reporter at KXAN shows the test stand going up in flames.

“During testing this evening we experienced a test anomaly resulting in a small fire on our test stand,” Firefly said in a statement last night. “The fire was quickly extinguished by our fire suppression systems on the stand and the local community emergency response team quickly responded. Both the test stand and our rocket are intact. At no time was there any risk to individuals on site or the community.”

Out of an abundance of caution, the sheriff’s office closed roadways surrounding Firefly’s facilities and evacuated the area. The area was ultimately declared safe, according to an update by the sheriff’s office at 10:25PM ET. “We apologize for any inconvenience caused and we will be working with the local emergency response team to ensure that the local community is kept aware of actions in a timely manner,” Firefly said in its statement. Firefly says it is currently investigating what caused the fire.

Last year, Firefly Aerospace had hopes of launching its Alpha rocket for the first time by the end of 2019 from its launch site at Vandenberg Air Force Base in California. That didn’t happen, and now it’s unclear how this incident will affect the timeline of the rocket’s development in the future. The company said it would update everyone on what happened and answer questions at an upcoming “community day.”