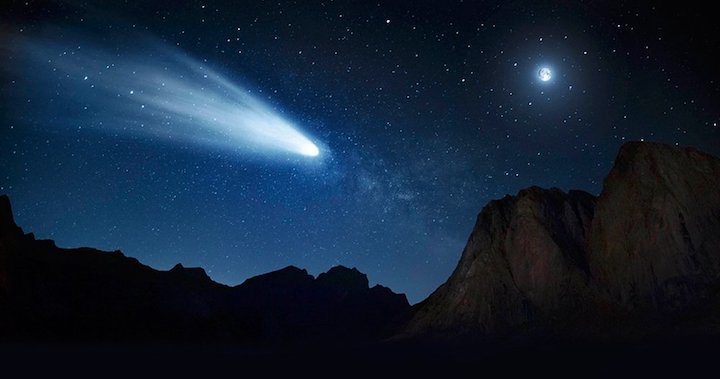 Under the leadership of astrophysicist Kathrin Altwegg, Bernese researchers have found an explanation for why very little nitrogen could previously be accounted for in the nebulous covering of comets: the building block for life predominantly occurs in the form of ammonium salts, the occurrence of which could not previously be measured. The salts may be a further indication that comet impacts may have made life on Earth possible in the first place.

More than 30 years ago, the European comet mission Giotto flew past Halley’s comet. The Bernese ion mass spectrometer IMS, led by Prof. em. Hans Balsiger, was on board. A key finding from the measurements taken by this instrument was that there appeared to be a lack of nitrogen in Halley’s coma – the nebulous covering of comets which forms when a comet passes close to the sun. Although nitrogen (N) was discovered in the form of ammonia (NH3) and hydrocyanic acid (HCN), the incidence was far removed from the expected cosmic incidence. More than 30 years later, researchers have solved this mystery thanks to a happy accident. This is a result of the analysis of data from the Bernese mass spectrometer ROSINA, which collected data on the comet 67P/Churyumov-Gerasimenko, called Chury for short, on board the ESA space probe Rosetta (see info box below).

Less than a month before the end of the Rosetta mission, the space probe was just 1.9 km above the surface of Chury as it flew through a dust cloud from the comet. This resulted in a direct impact of dust in the ion source of the mass spectrometer ROSINA-DFMS (Rosetta Orbiter Sensor for Ion and Neutral Analysis-Double Focusing Mass Spectrometer), led by the University of Bern. Kathrin Altwegg, lead researcher on ROSINA and co-author of the new study published today in the prestigious journal Nature Astronomy, says: “This dust almost destroyed our instrument and confused Rosetta’s position control.”

Thanks to the flight through the dust cloud, it was possible to detect substances which normally remain in the cold environment of the comet on the dust particles and therefore cannot be measured. The amount of particles, some of which had never before been measured on a comet, was astonishing. In particular, the incidence of ammonia, the chemical compound of nitrogen and hydrogen with the formula NH3, was suddenly many times greater. “We came up with the idea that the incidence of ammonia in the ROSINA data could potentially be traced back to the occurrence of ammonium salts,” explains Altwegg. “As a salt, ammonia has a much higher evaporation temperature than ice and is therefore mostly present in the form of a solid in the cold environment of a comet. It has not been possible to measure these solids either through remote sensing with telescopes or on the spot until now.”

Ammonium salt and its role in the emergence of life

Extensive laboratory work was needed in order to prove the presence of these salts in cometary ice. “The ROSINA team has found traces of five different ammonium salts: ammonium chloride, ammonium cyanide, ammonium cyanate, ammonium formate and ammonium acetate,” says the chemist on the ROSINA team and co-author of the current study, Dr. Nora Hänni. “Until now, the apparent absence of nitrogen on comets was a mystery. Our study now shows that it is very probable that nitrogen is present on comets, namely in the form of ammonium salts,” Hänni continues.

The ammonium salts discovered include several astrobiologically relevant molecules which may result in the development of urea, amino acids, adenine and nucleotides. Kathrin Altwegg says: “This is definitely a further indication that comet impacts may be linked with the emergence of life on Earth.”

Astronomie - The salt of the comet
428 Views
Created with page4