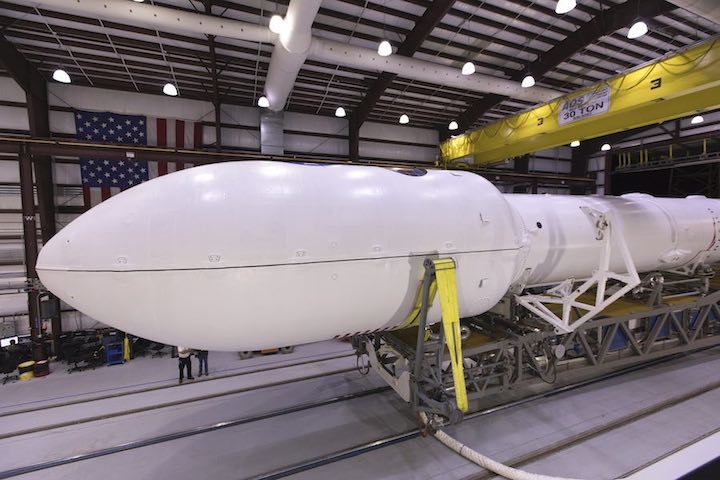 SpaceX plans to launch its next group of Starlink broadband satellites aboard a Falcon 9 rocket as soon as Monday, Jan. 20, from Cape Canaveral, two days after the company is scheduled to launch a modified Falcon 9 booster from a separate facility at the Florida spaceport to test the Crew Dragon spaceship’s emergency escape system.

SpaceX’s ability to achieve back-to-back launch schedule hinges on several factors, including an expected test-firing in the coming days of the Falcon 9 booster slated to fly on the next Starlink launch.

But assuming everything goes according to plan, SpaceX aims to perform launches from two pads on Florida’s Space Coast as soon as Saturday and Monday.

Technicians inside a hangar near pad 39A are attaching the Crew Dragon spaceship to the Falcon 9 rocket this week, in advance of its return to the launch complex before a countdown rehearsal Friday, during which two NASA astronauts will practice launch day procedures before climbing aboard the next Crew Dragon spaceship for a flight to the International Space Station.

The Falcon 9 is scheduled to lift off from pad 39A — without astronauts on-board — during a four-hour window opening at 8 a.m. EST (1300 GMT) Saturday. About a minute-and-a-half after launch, the first stage’s nine Merlin 1D engines will be programmed to switch off, and SuperDraco thrusters on the Crew Dragon capsule mounted atop the rocket will ignite to propel the human-rated ship away from the Falcon 9.

SpaceX will recover the Crew Dragon capsule from the Atlantic Ocean after it splashes down under parachutes around 20 miles (32 kilometers) offshore. The Falcon 9 rocket, flying with a previously-used first stage booster, is expected to be destroyed.

Meanwhile, teams at pad 40 at Cape Canaveral Air Force Station — located a few miles to the south of pad 39A — are preparing a separate Falcon 9 rocket for liftoff as soon as Monday, Jan. 20, sources said.

The Jan. 20 launch will haul the next batch of approximately 60 Starlink satellites into orbit for SpaceX’s global broadband Internet network. Assuming the mission remains on schedule, liftoff time Jan. 20 is expected at 12:20 p.m. EST (1720 GMT).

The two upcoming launches from Florida’s Space Coast will mark the second and third missions of the year for SpaceX, which says it could perform 35 or more launches in 2020, including flights carrying new Starlink broadband satellite into orbit as often as every two weeks.

SpaceX conducted 21 launches in 2018, the most missions in a single year in the company’s history. The company launched 13 missions last year.

The dual launches planned by SpaceX in the next week are not the only major activities scheduled at Cape Canaveral.

United Launch Alliance plans to roll an Atlas 5 rocket out of its vertical hangar at pad 41 — located between SpaceX facilities at pad 39A and pad 40 — as soon as Monday for a practice countdown Tuesday, Jan. 21, ahead of the launcher’s scheduled liftoff Feb. 5 with the joint NASA-European Space Agency Solar Orbiter mission, a robotic science probe designed to observe the sun.