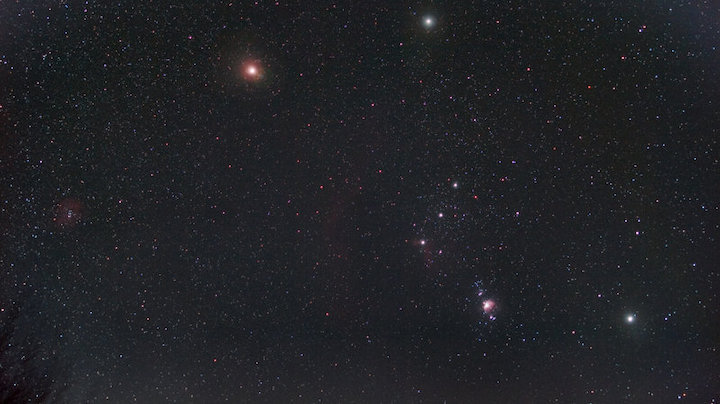 To find Betelgeuse, first locate Orion's belt. Betelgeuse is the star up and to the left, at Orion's left shoulder (from your perspective).

THE CONSTELLATION ORION is one of the most recognizable patterns in the night sky, visible around the world. But if you’ve looked at Orion recently and thought something seemed off, you’re not wrong: The giant red star Betelgeuse, which marks the hunter’s right shoulder, is the dimmest it’s been in almost a century.

Normally, Betelgeuse is among the 10 brightest stars in the sky. However, the red giant began dimming in October, and by mid-December, the star had faded so much it wasn’t even in the top 20, Villanova University’s Edward Guinan reported in an Astronomer’s Telegram.

“Now the outline of Orion is noticeably different with Betelgeuse so faint,” he says. (See how many constellations you can identify with our interactive quiz.)

To be clear, dimming alone isn’t all that odd for a star like Betelgeuse. It’s what’s known as a variable star, and its shifts in brightness have been closely studied for decades. However, it is unusual for one of the sky’s most prominent points of light to fade so noticeably, prompting scientists to consider the possibility that something more exciting could be about to happen: Betelgeuse might explode and die, briefly blazing brighter than the full moon before vanishing from our night sky forever.

Huge, red stars like Betelgeuse live fast and die violently, exploding in stellar events called supernovae that are visible across vast distances. So, while Betelgeuse is a relatively young star—only about 8.5 million years old—astronomers know that it is nearing the end of its life.

“The biggest question now is when it will explode in a supernova,” UC Berkeley’s Sarafina Nance, who studies Betelgeuse and stellar explosions, said on Twitter. “Disclaimer: I don't think it's going to explode any time soon,” she added during an interview with National Geographic. “But I am excited [for] when it does.”

What do we know about Betelgeuse?

The supergiant star’s formal moniker is derived from a mistranslated Arabic name meaning “the hand of Orion” (yad al-jauza). Today, many people pronounce the name like the titular character in Tim Burton’s 1988 film Beetlejuice. The star is also referred to as Alpha Orionis, a designation normally reserved for the brightest star in a constellation, even though Rigel, at Orion’s left foot, is actually brighter.

Betelgeuse is huge and bloated, wielding 20 times the sun’s heft. If you swapped out the sun and replaced it with Betelgeuse, the red star would swallow Mercury, Venus, Earth, Mars, the asteroid belt, a couple of spacecraft, and maybe Jupiter; Saturn would suddenly be quite toasty.

It’s also relatively close to our solar system, in cosmic terms, estimated to be in the neighborhood of 600 light-years away. So, when this star detonates, the explosion will be bright enough to cast shadows on Earth at night and will be visible during the day for a few months, at least. Then, the star will fade from our sky.

What’ll happen to us when Betelgeuse blows?

Nothing. Even though Betelgeuse is nearby in astronomical terms, it’s nowhere near close enough for the explosion to affect life on Earth. Astronomers calculate that it’ll take about six million years for the shock wave and any cold, diffuse debris to reach the solar system, and even then, the sun’s protective bubble will shield us from the splattered star guts.

Instead, once astronomers see that Betelgeuse is going to go supernova, you should get to a clear northern sky as quickly as possible and enjoy the show.

“It would be so incredibly cool!” Nance says. “By far and away the most incredible thing to happen in my life.”

So, is that actually about to occur?

This is the big mystery, and it’s one of the reasons why the star’s current behavior is intriguing. Scientists suspect that a precipitous drop in brightness could portend a star’s demise.

“As massive stars near the end of their lives, they experience insane and violent mass loss,” Nance says. In theory, all that ejected dust could shroud and darken the nearly dead star, causing it to dim from our perspective right before it goes supernova. In practice, though, it’s not yet certain whether stars are darkest before they blow—no one has yet been able to closely study a doomed star before, during, and after its demise.

But isn’t it normal for Betelgeuse to be dimming?

Yes. Betelgeuse is classified as a semiregular variable star, meaning that its brightness semiregularly changes. Millennia ago, Australian Aborigines noted the star’s fluctuating luminosity, and British astronomer John Herschel recorded the phenomenon in 1836.

More recently, the American Association of Variable Star Observers has been compiling observations of Betelgeuse’s fits and starts. Decades of photometric data show that Betelgeuse brightens and dims in cycles, with one notable cycle vacillating on a roughly six-year timescale, and another rising and falling every 425 days or so.

Astronomie - A Star In Orion Is Dimming. Is It About To Explode?
1024 Views
Created with page4