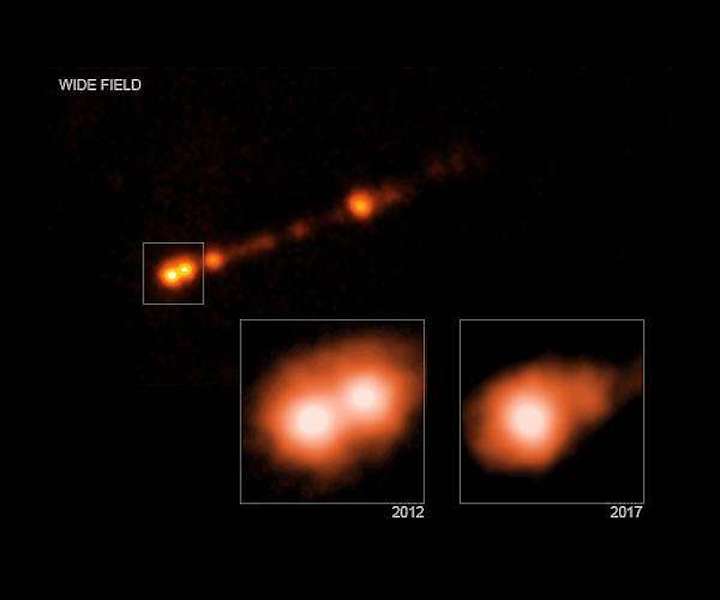 These images show evidence from NASA's Chandra X-ray Observatory that the black hole in the galaxy Messier 87 (M87) is blasting particles out at over 99% the speed of light, as described in our latest press release. While astronomers have observed features in the M87 jet blasting away from its black hole this quickly at radio and optical wavelengths for many years, this provides the strongest evidence yet that actual particles are travelling this fast. Astronomers required the sharp X-ray vision from Chandra in order to make these precise measurements.

Using NASA's Chandra X-ray Observatory, astronomers have seen that the famous giant black hole in Messier 87 is propelling particles at speeds greater than 99% of the speed of light.

The Event Horizon Telescope Collaboration released the first image of a black hole with observations of the massive, dark object at the center of Messier 87, or M87, last April. This black hole has a mass of about 6.5 billion times that of the Sun and is located about 55 million light-years from Earth. The black hole has been called M87* by astronomers and has recently been given the Hawaiian name of "Powehi."

For years, astronomers have observed radiation from a jet of high energy particles - powered by the black hole - blasting out of the center of M87. They have studied the jet in radio, optical, and X-ray light, including with Chandra. And now by using Chandra observations, researchers have seen that sections of the jet are moving at nearly the speed of light.

"This is the first time such extreme speeds by a black hole's jet have been recorded using X-ray data," said Ralph Kraft of the Center of Astrophysics | Harvard and Smithsonian (CfA) in Cambridge, Mass., who presented the study at the American Astronomical Society meeting in Honolulu, Hawaii. "We needed the sharp X-ray vision of Chandra to make these measurements."

When matter gets close enough to a black hole, it enters into a swirling pattern called an accretion disk. Some material from the inner part of the accretion disk falls onto the black hole and some of it is redirected away from the black hole in the form of narrow beams, or jets, of material along magnetic field lines. Because this infall process is irregular, the jets are made of clumps or knots that can sometimes be identified with Chandra and other telescopes

"One of the unbreakable laws of physics is that nothing can move faster than the speed of light," said co-author Brad Snios, also of the CfA. "We haven't broken physics, but we have found an example of an amazing phenomenon called superluminal motion."

Superluminal motion occurs when objects are traveling close to the speed of light along a direction that is close to our line of sight. The jet travels almost as quickly towards us as the light it generates, giving the illusion that the jet's motion is much more rapid than the speed of light. In the case of M87*, the jet is pointing close to our direction, resulting in these exotic apparent speeds.

Astronomers have previously seen such motion in M87*'s jet at radio and optical wavelengths, but they have not been able to definitively show that matter in the jet is moving at very close to the speed of light. For example, the moving features could be a wave or a shock, similar to a sonic boom from a supersonic plane, rather than tracing the motions of matter.

This latest result shows the ability of X-rays to act as an accurate cosmic speed gun. The team observed that the feature moving with an apparent speed of 6.3 times the speed of light also faded by over 70% between 2012 and 2017. This fading was likely caused by particles' loss of energy due to the radiation produced as they spiral around a magnetic field. For this to occur the team must be seeing X-rays from the same particles at both times, and not a moving wave.

"Our work gives the strongest evidence yet that particles in M87*'s jet are actually traveling at close to the cosmic speed limit," said Snios.

The Chandra data are an excellent complement to the EHT data. The size of the ring around the black hole seen with the Event Horizon Telescope is about a hundred million times smaller than the size of the jet seen with Chandra.

Another difference is that the EHT observed M87 over six days in April 2017, giving a recent snapshot of the black hole. The Chandra observations investigate ejected material within the jet that was launched from the black hole hundreds and thousands of years earlier.

"It's like the Event Horizon Telescope is giving a close-up view of a rocket launcher," said the CfA's Paul Nulsen, another co-author of the study, "and Chandra is showing us the rockets in flight."