Six eclipses occur in 2020, with one total and one annular solar eclipse in the mix. But the four lunar eclipses will be disappointing brushes through the fringe of Earth's shadow. 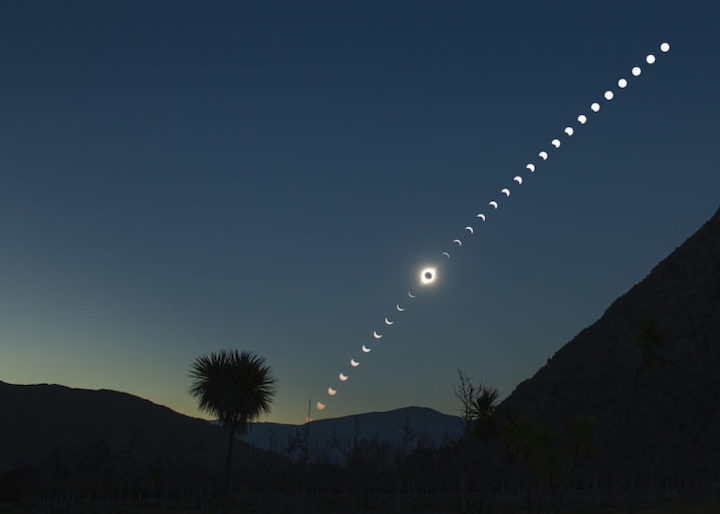 Callan Carpenter compiled this montage from pictures taken every 5 minutes during the total solar eclipse on July 2, 2019. He was a member of Sky & Telescope's tour group in El Molle, Chile.

Up to seven eclipses of the Sun and Moon can take place in one year, though the last time that happened was 1982, and the fewest possible is four. The mix of six events occurring in 2020 is especially interesting: The two solar eclipses will be "central" events (one total and one annular), yet all four of the lunar eclipses will be penumbral and therefore hardly noticeable. North Americans will be disappointed to learn that they'll have a chance to see only two of the penumbral events.

Why Do Eclipses Happen?

Eclipses of the Sun or Moon can only occur when the Moon crosses the plane of Earth's orbit (orange circle) very close to the time of new or full Moon. Eclipse "windows" occur six months apart.
Jay Anderson

A solar eclipse, such as the one in August 2017, occurs only at new Moon, when the lunar disk passes directly between us and the Sun and the Moon's shadow falls somewhere on Earth's surface.

Conversely, a lunar eclipsetakes place during full Moon, when our satellite passes through Earth's shadow.

These alignments don't happen at every new and full Moon because the lunar orbit is tipped about 5° to Earth's orbital plane — only occasionally do the Sun, Earth, and Moon line up exactly enough for an eclipse to occur. (The technical name for that, by the way, is syzygy.) And, as the diagram above implies, those alignments occur roughly six months apart. In 2020, for example, one solar eclipse occurs in June and the other in December.

Three types of lunar eclipse are possible (total, partial, and penumbral) depending on how deeply the full Moon plunges into or near the umbra, our planet's dark, central shadow.

A long-exposure image captured red hues on the portion of the Moon inside the umbra during the lunar eclipse on October 8, 2014.
Johnny Horne

If it goes all the way in, we see a total lunar eclipse that's preceded and followed by partial phases. That was the case during the widely viewed event in September 2015, which marked the conclusion of a series of four consecutive total lunar eclipses in 2014–15! Such eclipse tetrads are not common — the last one occurred during 2003–04, but the next won't begin until 2032.

If the Moon skims part way into the umbra, as shown at right, only the partial phases occur — you'll see part of the Moon in nearly full sunlight, and part of it steeped in the deep, red-tinged umbral shadow.

And if its disk passes just outside the umbra, it still encounters the weak penumbral shadow cast by Earth. A sharp-eyed observer will notice that one side of the full Moon's disk looks a little dusky. All four of 2020's lunar eclipses are of the penumbral variety.

Fortunately, every lunar eclipse is observable anywhere on Earth where the Moon is above the horizon. (But there's still an element of luck involved — after all, the sky has to be clear!)

However, solar eclipses more tightly restrict where you can see them because the Moon casts a smaller shadow than Earth does.

If the Moon completely hides the Sun, the eclipse is considered total. With its brilliant disk completely covered, the Sun's ghostly white outer atmosphere is momentarily revealed for durations from seconds to several minutes. In November 2013, for example, planeloads of eclipse-chasers converged in a remote portion of northern Kenya to watch just 11 secondsof totality.

Here's how the corona looked during the total solar eclipse seen across the U.S. on August 21, 2017.
Sky & Telescope / Kelly Beatty

A completely eclipsed Sun can be viewed only from a narrow track or path on Earth's surface that's typically just 100 miles (160 km) wide. Outside of that path, about half of the daylit hemisphere of Earth is able to watch a partial eclipse as the Moon obscures a portion of the Sun.

Occasionally the Moon passes directly in front of the Sun but doesn't completely cover it. When that occurs, it's usually because the Moon is farther from Earth than its average distance. (The Moon's orbit isn't perfectly circular; its eccentricity is about 5%.)

This geometric circumstance is known as an annular eclipse, so-called because you can see a ring, or annulus, of sunlight surrounding the lunar disk. Annular eclipses of the Sun occur about as often as the total ones do, and an annular's path is likewise narrow. Outside of it observers see only a partial cover-up.

Below are brief descriptions of the six eclipses that take place in 2020. You'll find more details in Sky & Telescope magazine or on this website as the date of each draws near. Times are given in Universal Time (UT) except as noted. Adjust these to get those for your time zone: for example, PST = UT – 8, and EST = UT – 5. (But be sure to allow for daylight or "summer" time: PDT = UT – 7, and EDT = UT – 4.)

By way of background, you might recall that an annular eclipse of the Sun occurred on December 26, 2019. Annular and total solar eclipses require the Moon to cross directly in front of the Sun as seen from Earth — and, as the graphic below shows, such "central" solar eclipses can only occur within a two-week-long interval when the Moon crosses the ecliptic during one of its two nodal crossings each year. However, the node-crossing "season" for partial solar eclipses is wider, roughly five weeks long.

Eclipses only happen near the time when the Moon crosses the ecliptic plane, an alignment that occurs twice each year. This "eclipse season" is longer for partial solar eclipses than for total or annular events.
Jay Anderson

And so, two weeks after December 26th's annular eclipse, after the Moon has moved to the opposite side of its orbit and becomes full, it grazes the northern edge of Earth's shadow during a penumbral lunar eclipse. This is a particularly deep incursion into the penumbra, and in fact the Moon just misses dipping into the much darker umbra. So an attentive observer should notice that the southern half of the lunar disk looks a little dusky. However, to see this "barely there" eclipse, you'll need to be in Europe, eastern Africa, Asia, or western Australia. It's a daylight event — and thus unobservable — in North and South America.

Nearly a half year passes before the next Sun-Earth-Moon syzygy, and this one also results in the Moon slipping only through Earth's penumbra. This time the lunar disk slides only halfway in, so it might not be obvious even for whose who realize it's happening! Again, it's not visible from North America; the timing favors Africa, Asia, and Australia.

The first solar eclipse of 2020 is an annular event that's just shy of being a total eclipse. (The Moon's apparent diameter is 99.4% that of the Sun.) Consequently, the path of annularity is narrowest (just 21 km) at its center and widest (85 km) near its western edge in central Africa, where observers can watch a Sun-encircled lunar silhouette at dawn lasting up to 82 seconds. The central path then crosses the Arabian Peninsula, Pakistan and northern India, Tibet, southern China, and Taiwan before sliding out over the Pacific Ocean.

A much broader area of Africa, eastern Europe, and Asia experiences a partial solar eclipse that day. Only 11% of the Sun's disk area is covered as seen from Rome, but that obscuration jumps to 73% in Riyadh, 65% in Calcutta, and 49% in Beijing. Eclipse guru Fred Espenak provides eclipse-viewing circumstances for hundreds of individual cities.

Two weeks after June's annular eclipse, the full Moon once again skirts along Earth's shadow, creating a penumbral eclipse. This time only a third of its disk enters the penumbra, so little that the dusky shadowing might not be discernible at all even at mid-eclipse (4:30 Universal Time). This event is visible throughout the United States, eastern Canada, and South America — except the Pacific Northwest, where the eclipse is under way during moonrise.

Observing prospects are somewhat better during the penumbral lunar eclipse on November 30th, during which almost all of the Moon intrudes into the penumbra. The timing benefits North America, with mid-eclipse at 9:43 UT. However, this means Americans will have to be up after midnight to see it. The eclipse will be in progress at moonset (dawn) as seen from South America.

The final eclipse of the year is the one that umbraphiles the world over are waiting for. Some 17 months after the Moon's shadow swept across central Chile and Argentina in July 2019, celestial history will repeat for these two countries on December 14th. Totality begins in the South Pacific Ocean at 14:33 UT, and 97 minutes later (16:10 UT) the umbral shadow reaches the coast of South America. It crosses Chile in just 4 minutes, then moves over 700 km of Argentina before sweeping into the South Atlantic without making any further landfall.

The path of totality (shown in red) on December 14, 2020, crosses Chile and Argentina. Parallel sets of white curves mark the extent of partial-eclipse visibility in 20%  intervals of the Sun's obscuration.
Michael Zeiler / GreatAmericanEclipse.com

Lying along this path are the Chilean resort towns of Villarica and Pucón. No sizable populations are so favored in Argentina, though the umbral shadow passes not far to the northeast of popular San Martín de los Andes and, farther east, follows Route 23 for a considerable distance. At the point of greatest eclipse, a well-positioned observer sees 2m 10sof totality with the briefly blackened Sun 73° above the northern horizon. (Remember: it's summer in the Southern Hemisphere!) Weather prospects in Chile and Argentina on eclipse day are quite favorable.

Unfortunately, the wide zone of partial phases does not extend into North America — even those in northern South America (like Venezuelans) are out of luck. Residents of Santiago will see 79% of the Sun's disk area obscured; from São Paulo the Moon covers 32% and from Buenos Aires it's 74%.

The recent run of hard-to-reach solar eclipses continues next year, with an annular eventrunning across the frigid Arctic and a total solar eclipse crossing even-more-frigid Antarctica. One bright spot is a not-quite-total (97%) lunar eclipse, on November 19, 2021, visible across North America.