The solar wind that pummels the Earth’s dayside magnetosphere causes turbulence, like air over a wing. Physicists at Rice University have developed new methods to characterize how that influences space weather on the nightside.

It’s rarely quiet up there. The solar wind streams around the Earth and cruises off into the night, but closer to the planet, parcels of plasma get caught in the turbulence and sink back toward Earth. That turbulence causes big ripples in the plasma. 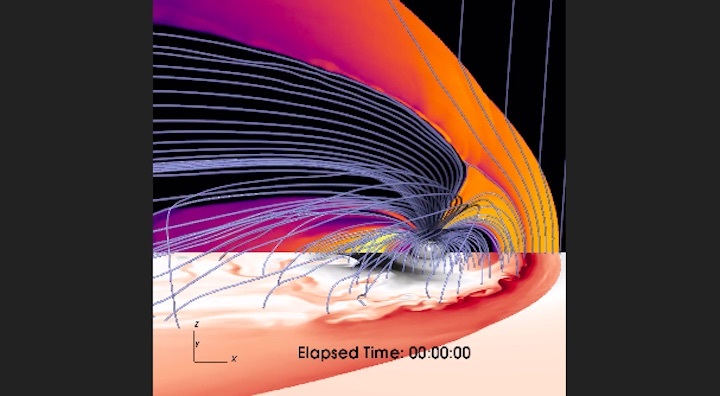 A magnetohydrodynamic simulation by the Gamera project at the Johns Hopkins Applied Physics Laboratory shows bursty bulk flows (in red and brown) in the plasma sheet approaching Earth on the nightside. Rice University space plasma physicists have developed algorithms to measure the buoyancy waves that appear in thin filaments of magnetic flux on the nightside. Courtesy of Gamera/JHUAPL)

With the help of several spacecraft and computational tools developed over the past decade, Rice scientists led by space plasma physicist Frank Toffoletto can now assess the ripples, called buoyancy waves, caused by the turbulence.

These waves, or oscillations, have been observed in the thin layer of magnetic flux along the base of the plasma sheet that tails away from the planet’s nightside. The Rice theory is the first to quantify their motion.

The theory adds another element to the Rice Convection Model, an established, decades-in-the-making algorithm that helps scientists calculate how the inner and middle magnetosphere will react to events like solar storms that threaten satellites, communications and power grids on Earth.

The new paper in JGR Space Physics by Toffoletto, emeritus professor Richard Wolf and former graduate student Aaron Schutza starts by describing the bubbles — “bursty bulk flows” predicted by Wolf and Rice alumnus Duane Pontius in 1990 — that fall back toward Earth through the plasma tail.

Functionally, they’re the reverse of buoyant air bubbles that bob up and down in the atmosphere because of gravity, but the plasma bubbles respond to magnetic fields instead. The plasma bubbles lose most of their momentum by the time they touch down at the theoretical, filamentlike boundary between the inner plasma sheet and the protective plasmasphere.

That sets the braking boundary into a gentle oscillation, which lasts mere minutes before stabilizing again. Toffoletto compared the motion to a plucked guitar string that quickly returns to equilibrium.

“The fancy name for this is the eigenmode,” he said. “We’re trying to figure out the low-frequency eigenmodes of the magnetosphere. They haven’t been studied very much, though they appear to be associated with dynamic disruptions to the magnetosphere.”

Toffoletto said the Rice team has in recent years discovered through simulations that the magnetosphere doesn’t always respond in a linear fashion to the steady driving force of the solar wind.

“You get all kinds of wave modes in the system,” he said, explaining that bursty bulk flows are one such mode. “Every time one of these things come flying in, when they hit the inner region, they basically reach their equilibrium point and oscillate with a certain frequency. Finding that frequency is what this paper is all about.”

As measured by the THEMIS spacecraft, the periods of these waves are a few minutes and the amplitudes are often bigger than the Earth.

“Understanding the natural frequency of the system and how it behaves can tell us a lot about the physical properties of plasma on the nightside, its transport and how it might be related to the aurora,” he said. “A lot of these phenomena show up in the ionosphere as auroral structures, and we don’t understand where these structures come from.”

A simulation by Rice University space plasma physicist Frank Toffoletto shows buoyancy wave oscillations in a magnetic field, due to bursty bulk flows drawn toward Earth on the nightside. Courtesy of Frank Toffoletto

Toffoletto said the models suggest buoyant waves may play a role in the formation of the ring currentthat consists of charged particles that flow around Earth as well as magnetospheric substorms, all of which are connected to the aurora.

He said that no more than a decade ago, many magnetosphere simulations “would look very uniform, kind of boring.” The Rice group is collaborating with the Applied Physics Laboratory to include the Rice Convection Model in a newly developed global magnetosphere code called “Gamera,” named after the fictional Japanese monster.

“Now, with such higher-resolution models and much better numerical methods, these structures are starting to show up in the simulations,” Toffoletto said. “This paper is one little piece of the puzzle we’re putting together of how the system behaves. All this plays a big role in understanding how space weather works and how that in turn impacts technology, satellites and ground-based systems.”

The Rice Convection Model itself was refreshed this month in a paper led by recent Rice alumnus Jian Yang, now an associate professor of Earth and space sciences at the Southern University of Science and Technology, Shenzhen, China.

The new study was supported by a NASA Heliophysics Supporting Research grant.