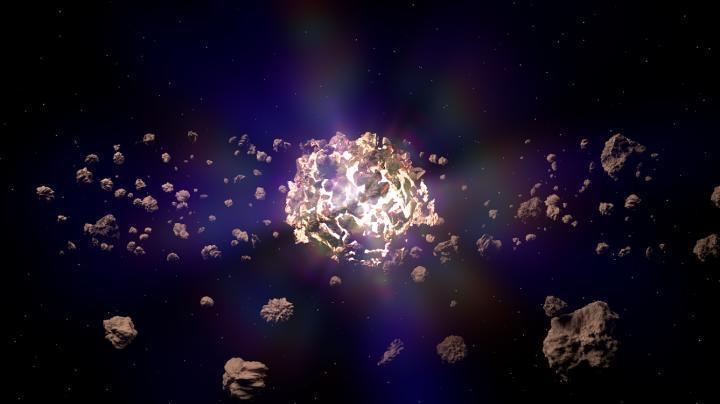 Billions of years ago, asteroid collisions resulted in the ejection of fragments hundreds of kilometers across and sharing similar orbits. The resulting groups are known as asteroid families.

Other asteroid groups formed as a result of rotational fission, which happens when a rapidly spinning body reaches critical rotation speed and splits into relatively small fragments only a few kilometers across.

Scientists have always thought about fission clusters as entirely distinct from collisional families. Now, however, a study conducted by researchers affiliated with São Paulo State University (UNESP) at Guaratinguetá, under the aegis of a project supported by São Paulo Research Foundation - FAPESP, has shown that fission clusters may originate from collisional families in some cases.

Researchers at the National Space Research Institute (INPE) and the Federal University of São Paulo (UNIFESP) in Brazil, as well as the University of Côte d'Azur in France, also took part in the study, which is published in the journal Nature Astronomy.

"These discoveries change our understanding of how asteroid families are formed," Valério Carruba, a professor at UNESP and principal investigator for the project, told Agência FAPESP.

"It was always believed that asteroid families resulted from collisions, and that the fragments could evolve via gravitational or non-gravitational mechanisms, remaining roughly the same size. Now we've observed that a collision isn't a one-off event but may trigger the subsequent formation of a cascade of other groups," Carruba said.

The authors of the published study note that detectable fission clusters in secondary and tertiary groups never account for more than 5% of the total population in asteroid families older than 100 million years.

"This is probably linked to the mechanism whereby primary asteroid families are formed," Carruba said.

According to Carruba, when asteroid families are formed they include streams of fragments that spin at high speed owing to the collision, or owing to non-gravitational effects such as YORP (the Yarkovsky-O'Keefe-Radzievskii-Paddack effect), a thermal torque due associated with solar radiation.

The fragments eventually cluster into fission groups that are visible only for a time. "After 5 to 10 million years they break up and can no longer be detected by the methods available to us," he explained. "Many fission clusters formed in the past are no longer detectable."

He added that there are no estimates of the rotation period (the time taken to rotate once) of the asteroids in many collision families. "Obtaining rotational data would help us find out which asteroids may be members of fission clusters," he said.