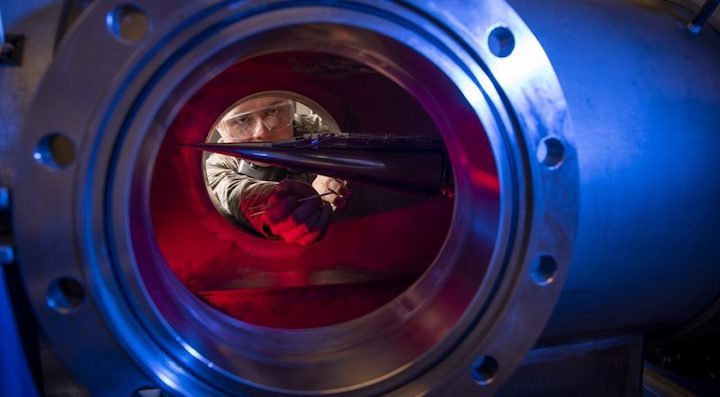 Rhea Space Activity and Lunar Resources pitched to the Air Force a concept to deploy two spacecraft to manufacture a large mirror in space.

WASHINGTON — One of the teams that won an Air Force contract last month at a “Space Pitch Day” event claims to have the answer to one the Pentagon’s toughest problems: spotting and tracking advanced missiles that fly at high speeds in unpredictable trajectories.

Rhea Space Activity (RSA) and its partner Lunar Resources pitched to the Air Force a concept to deploy two spacecraft to manufacture a large mirror in space. The mirror would be installed, in orbit, into a telescope that would be used to detect hypersonic vehicles, said Shawn Usman, an astrophysicist and founder of RSA, a two-year old space startup that advises small businesses and recently decided to start developing its own projects for national security applications.

Defense officials have identified Chinese and Russian hypersonic air vehicles as looming threats that are likely to penetrate current anti-missile shield systems. Spotting and tracking hypersonic missiles is hard because they are 10 to 20 times dimmer than what the U.S. normally tracks by satellites in geostationary orbit. The Pentagon is studying options to defend against these weapons and has concluded that the best vantage point to detect and track them is from space, particularly from lower orbits.

The detection of advanced hypersonic vehicles requires large aperture electro-optical and infrared (EO/IR) space sensors, Usman said, and the idea is to manufacture them in space. “The naturally occurring zero-G environment and ultra-high-vacuum in orbit provide ideal conditions to manufacture counter-hypersonic optical components that are impossible to make on Earth,” Usman told SpaceNews.

Lunar Resources is an in-space manufacturing company that helped RSA develop the concept for how to construct a very large EO/IR mirror in space.

Usman explained that one of the payloads would “spray paint” the optical coatings needed to make the EO/IR mirror on a small satellite dubbed Ruby Sky. The satellite would then have to demonstrate it can sense targets from orbit.

Cameo Lance, a physicist at RSA, said the Ruby Sky experiment could bring about an entirely new way to build telescopes. “We’ve been building telescopes the same way for 70 years,” she said. The primary mirrors on telescopes are made on the ground, put in a rocket and flown to space.

If this experiment is successful, the primary mirror of a telescope will be larger than the satellite it’s housed in, Lance said, “We can make these primary mirrors large enough to detect these smaller signatures that current assets are not capable of detecting.”

At the Space Pitch Day event, the Air Force awarded Lunar Resources a $750,000 Small Business Innovation Research (SBIR) Phase 2 contract, with RSA as a subcontractor, to get the project moving. Usman said he is hopeful Air Force sponsors from several organizations will provide more funding, and he also is talking to private investors.

The Air Force has introduced new processes in the SBIR program to encourage private investments. For example, companies can apply for up to a $1.5 million SBIR Phase 2 award only if the company can secure matching funds from a private investor. “It’s a way to do public-private investment for space,” Usman said.

RSA plans to apply for more SBIR awards. Usman said the company is confident that it can get Ruby Sky off the ground with a combination of private and government funds. The team has estimated that building the two spacecraft and demonstrating the concept in space could cost upwards of $20 million.