It would be very hard for microbes to get all the way from Earth or Mars out to the ocean moons, a new study suggests. 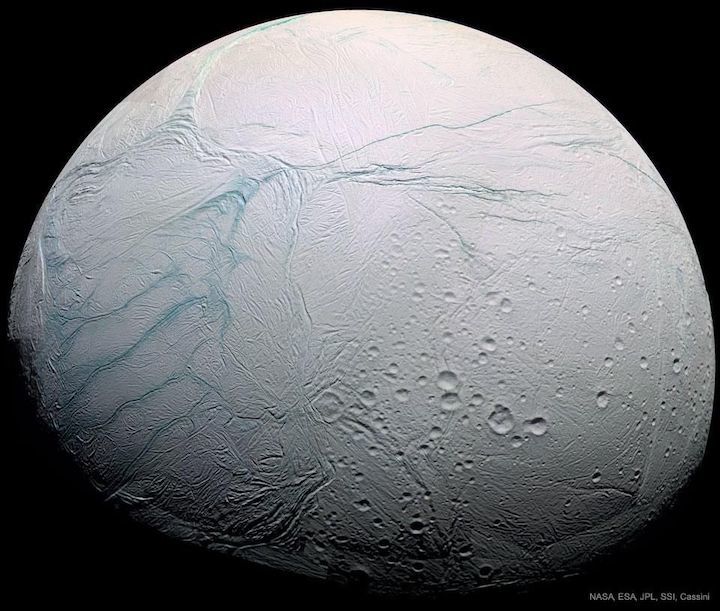 An up-close look at the "tiger stripes" on Saturn's moon Enceladus, which is thought to harbor a big ocean of liquid water beneath its icy surface.
(Image: © NASA, ESA, JPL, SSI, Cassini Imaging Team)

SAN FRANCISCO — If there are creatures swimming in the buried oceans of the outer solar system, they're probably not related to us, new research suggests.

Some scientists believe that life has hopped from world to world around the solar system, aboard chunks of rock blasted into space by comet or asteroid impacts. Indeed, there's a school of thought that the life teeming here on Earth is actually native to Mars, which likely boasted habitable conditions earlier than our own planet did. (This rock-riding idea is known as "lithopanspermia," a subset of the broader panspermia notion, which envisions spread by whatever means, either natural or guided by an intelligent hand.)

But what are the odds that such putative pioneers could colonize the habitable real estate much farther out — specifically, the Jupiter moon Europa and the Saturn satellite Enceladus, both of which harbor big oceans of salty liquid water beneath their ice shells?

Purdue University geophysicist Jay Melosh tackled this question and presented the results last week during a talk here at the annual fall meeting of the American Geophysical Union.

Melosh used computer models to follow the fates of 100,000 simulated Mars particles launched off the Red Planet by an impact. He modeled three different ejection speeds: 1, 3, and 5 kilometers per second (about 2,240 mph, 6,710 mph and and 11,180 mph, respectively).

We know that about 1 ton of Mars rocks that are fist-size or larger rain down on Earth every year. Using that figure, Melosh calculated that Europa gets about 0.4 grams of Mars material per year, and Enceladus receives just 2-4 milligrams. These are averages, he stressed; the moons' Mars mass almost certainly comes from very infrequent arrivals of decent-sized rocks, not a steady flow of small stuff.

The numbers are similar if the source of the rocks is Earth rather than Mars, Melosh said.

These results might seem to bode well for life's spread; after all, it might take just one impact of a microbe-bearing rock to turn Europa or Enceladus from habitable to inhabited. But there are more factors to consider, and they tamp down the optimism.

For example, Melosh found that the median transit time for a Mars meteorite that ends up hitting Enceladus is 2 billion years. Microbes are tough, but that's a long time to endure the harsh conditions of deep space. And the simulations indicated that these incoming Mars rocks would hit Enceladus at between 5 and 31 km/s (11,180 mph to 69,350 mph). The lower end of that range might be survivable, but it's hard to imagine anything living through those more extreme impacts, Melosh said.

"So, the bottom line: If life should be found in the oceans of Europa or Enceladus, it is very likely that it’s indigenous rather than seeded from Earth, Mars or (especially) another solar system," Melosh said during his AGU talk. (His calculations peg the probability of an exoplanet meteorite impacting Earth over the past 4.5 billion years at just 0.01%. The chances are much lower for Europa and Enceladus, he said.)

That's exciting news, if viewed from a certain perspective. Europa and Enceladus — and other potentially habitable worlds in the outer solar system, such as Saturn's huge moon Titan — may well have remained uncontaminated for eons, providing ample opportunity for native life-forms to take root and evolve. So, our solar system may boast many different types of life, rather than one widespread one. (Of course, seeing how Earth-like life would evolve over billions of years in a frigid, buried ocean would be pretty exciting, too.)

And if we discover just one such "second genesis" in our solar system, we would know that life is no miracle and must be common throughout the cosmos.

We may be on the verge of answering some of these profound questions. For example, NASA is developing a mission called Europa Clipper, which will characterize the satellite's ocean and scout out potential touchdown sites for a future life-hunting lander mission, among other tasks. Clipper is scheduled to launch in the early to mid-2020s, but the lander's future is murky; though Congress has ordered NASA to develop the surface mission, it's unclear if the funding will come through to make that happen.

Another NASA mission, called Dragonfly, will launch in 2026 to study Titan's complex chemistry. This robotic rotorcraft could potentially spot signs of life in the big moon's air, if any are there to be found. And over the longer haul, researchers are looking into ways to get a robot through the ice shells of Europa and Enceladus and into their possibly life-supporting oceans. No such mission is on the books, but one could get off the ground in the 2030s if we're lucky.

There will be serious astrobiological action closer to home soon, too. NASA plans to launch a life-hunting rover to Mars next summer, as do the European Space Agency and Russia, which are working together via a program called ExoMars. Both of these wheeled robots will focus on finding signs of ancient, not currently existing, Red Planet organisms. (Of course, chances are decent that Martians, if they exist, are related to us.)

Exoplanets are part of the picture as well. NASA's James Webb Space Telescope, which is due to launch in 2021, will be able to sniff the atmospheres of nearby alien worlds for potential biosignatures, as will three giant ground-based observatories scheduled to come online in the middle to late 2020s — the Giant Magellan Telescope, the Extremely Large Telescope and the Thirty Meter Telescope.

Astronomie - If We Find Life on Europa or Enceladus, It Will Probably Be a '2nd Genesis'
422 Views
Created with page4