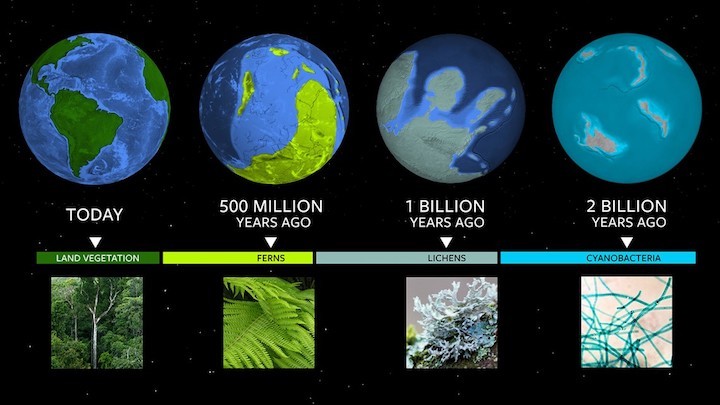 To understand where exoplanets are in their own evolution, astronomers can use Earth’s biological milestones as a Rosetta stone.

Cornell astronomers have reached into nature’s color palette from early Earth to create a cosmic “cheat sheet” for looking at distant worlds. By correlating tints and hues, researchers aim to understand where discovered exoplanets may reasonably fall along their own evolutionary spectrum.

“In our search to understand exoplanets, we’re using the early Earth and its biological milestones in history as a Rosetta stone,” said Jack O’Malley-James, a research associate at Cornell’s Carl Sagan Institute.

O’Malley-James has co-authored “Expanding the Timeline for Earth’s Photosynthetic Red Edge Biosignature” with Lisa Kaltenegger, professor of astronomy and director of the Sagan Institute. The paper was published July 9 in the Astrophysical Journal Letters.

“If an alien had used color to observe if our Earth had life, that alien would see very different colors throughout our planet’s history – going back billions of years – when different life forms dominated Earth’s surface,” Kaltenegger said.

“Astronomers had concentrated only on vegetation before, but with a better color palette, researchers can now look beyond a half-billion years and up to 2.5 billion years back on Earth’s history to match like periods on exoplanets,” she said.

For the last half-billion years – roughly 10% our planet’s lifetime – chlorophyll, present in many familiar forms of plant life such as leaves and lichen, has been the key component in Earth’s biosignature. But other flora, such as cyanobacteria and algae, are much older than land-based vegetation, but their chlorophyll-containing structures leave their own telltale signs on a planet’s surface.

“Scientists can observe surface biosignatures beyond vegetation on Earth-like exoplanets by using our own planet as the key for what to look for,” O’Malley-James said.

O’Malley-James and Kaltenegger modeled spectra of Earth-like exoplanets with different surface organisms that use chlorophyll. Scenarios might include where a few organisms dominate the entire surface of an Earth-like planet, such as the fictional, swampy world of Dagobah, home to Yoda in the “Star Wars” movies.

Lichens (a symbiotic fungal and photosynthetic partnership) may have colonized Earth’s land masses some 1.2 billion years ago and would have painted Earth in sage to mint green colors. This coverage would have generated a “nonvegetative” photosynthetic red-edge signature (the part of the spectrum that helps keep plants from getting burned by the sun) before the biota of today’s modern Earth took over.

O’Malley-James and Kaltenegger said that cyanobacteria – like surface algae – may have been widespread between 2 billion and 3 billion years ago, producing a photosynthetic red edge, and could be found on other Earth-like exoplanets.

This research show that lichens, algae and cyanobacteria could have provided a detectable surface red edge feature for a younger Earth, long before land vegetation became widespread 500 million to 750 million years ago, O’Malley-James said.

“This paper expands the use of a photosynthetic red edge surface bio-feature to earlier times in Earth’s history,” he said, “as well as to a wider range of habitable extrasolar planet scenarios.”

Funding for this research came from the Simons Foundation.