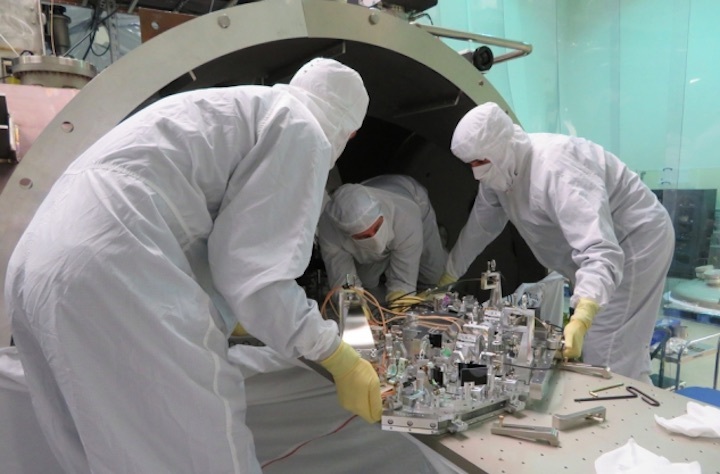 Technology “squeezes” out quantum noise so more gravitational wave signals can be detected.

Just a year ago, the National Science Foundation-funded Laser Interferometer Gravitational-wave Observatory, or LIGO, was picking up whispers of gravitational waves every month or so. Now, a new addition to the system is enabling the instruments to detect these ripples in space-time nearly every week.

Since the start of LIGO’s third operating run in April, a new instrument known as a quantum vacuum squeezer has helped scientists pick out dozens of gravitational wave signals, including one that appears to have been generated by a binary neutron star — the explosive merging of two neutron stars.

The squeezer, as scientists call it, was designed, built, and integrated with LIGO’s detectors by MIT researchers, along with collaborators from Caltech and the Australian National University, who detail its workings in a paper published today in the journal Physical Review Letters.

What the instrument “squeezes” is quantum noise — infinitesimally small fluctuations in the vacuum of space that make it into the detectors. The signals that LIGO detects are so tiny that these quantum, otherwise minor fluctuations can have a contaminating effect, potentially muddying or completely masking incoming signals of gravitational waves.

“Where quantum mechanics comes in relates to the fact that LIGO’s laser is made of photons,” explains lead author Maggie Tse, a graduate student at MIT. “Instead of a continuous stream of laser light, if you look close enough it’s actually a noisy parade of individual photons, each under the influence of vacuum fluctuations. Whereas a continuous stream of light would create a constant hum in the detector, the individual photons each arrive at the detector with a little ‘pop.’”

“This quantum noise is like a popcorn crackle in the background that creeps into our interferometer, and is very difficult to measure,” adds Nergis Mavalvala, the Marble Professor of Astrophysics and associate head of the Department of Physics at MIT.

With the new squeezer technology, LIGO has shaved down this confounding quantum crackle, extending the detectors’ range by 15 percent. Combined with an increase in LIGO’s laser power, this means the detectors can pick out a gravitational wave generated by a source in the universe out to about 140 megaparsecs, or more than 400 million light years away. This extended range has enabled LIGO to detect gravitational waves on an almost weekly basis.

“When the rate of detection goes up, not only do we understand more about the sources we know, because we have more to study, but our potential for discovering unknown things comes in,” says Mavalvala, a longtime member of the LIGO scientific team. “We’re casting a broader net.”

The new paper’s lead authors are graduate students Maggie Tse and Haocun Yu, and Lisa Barsotti, a principal research scientist at MIT’s Kavli Institute for Astrophysics and Space Research, along with others in the LIGO Scientific Collaboration.

LIGO comprises two identical detectors, one located at Hanford, Washington, and the other at Livingston, Louisiana. Each detector consists of two 4-kilometer-long tunnels, or arms, each extending out from the other in the shape of an “L.”

The main source of uncertainty in LIGO’s measurements comes from quantum noise in a laser’s surrounding vacuum. While a vacuum is typically thought of as a nothingness, or emptiness in space, physicists understand it as a state in which subatomic particles (in this case, photons) are being constantly created and destroyed, appearing then disappearing so quickly they are extremely difficult to detect. Both the time of arrival (phase) and number (amplitude) of these photons are equally unknown, and equally uncertain, making it difficult for scientists to pick out gravitational-wave signals from the resulting background of quantum noise.

And yet, this quantum crackle is constant, and as LIGO seeks to detect farther, fainter signals, this quantum noise has become more of a limiting factor.

“The measurement we’re making is so sensitive that the quantum vacuum matters,” Barsotti notes.

Putting the squeeze on “spooky” noise

The research team at MIT began over 15  years ago to design a device to squeeze down the uncertainty in quantum noise, to reveal fainter and more distant gravitational wave signals that would otherwise be buried the quantum noise.

Quantum squeezing was a theory that was first proposed in the 1980s, the general idea being that quantum vacuum noise can be represented as a sphere of uncertainty along two main axes: phase and amplitude. If this sphere were squeezed, like a stress ball, in a way that constricted the sphere along the amplitude axis, this would in effect shrink the uncertainty in the amplitude state of a vacuum (the squeezed part of the stress ball), while increasing the uncertainty in the phase state (stress ball’s displaced, distended portion). Since it is predominantly the phase uncertainty that contributes noise to LIGO, shrinking it could make the detector more sensitive to astrophysical signals.

When the theory was first proposed nearly 40 years ago, a handful of research groups tried to build quantum squeezing instruments in the lab.

“After these first demonstrations, it went quiet,” Mavalvala says.

“The challenge with building squeezers is that the squeezed vacuum state is very fragile and delicate,” Tse adds. “Getting the squeezed ball, in one piece, from where it is generated to where it is measured is surprisingly hard. Any misstep, and the ball can bounce right back to its unsqueezed state.”

Then, around 2002, just as LIGO’s detectors first started searching for gravitational waves, researchers at MIT began thinking about quantum squeezing as a way to reduce the noise that could possibly mask an incredibly faint gravitational wave signal. They developed a preliminary design for a vacuum  squeezer, which they tested in 2010 at LIGO’s Hanford site. The result was encouraging: The instrument managed to boost LIGO’s signal-to-noise ratio — the strength of a promising signal versus the background noise.

Since then, the team, led by Tse and Barsotti, has refined its design, and built and integrated squeezers  into both LIGO detectors. The heart of the squeezer is an optical parametric oscillator, or OPO — a bowtie-shaped device that holds a small crystal within a configuration of mirrors. When the researchers direct a laser beam to the crystal, the crystal’s atoms facilitate interactions between the laser and the quantum vacuum in a way that rearranges their properties of phase versus amplitude, creating a new, “squeezed” vacuum that then continues down each of the detector’s arm as it normally would. This squeezed vacuum has smaller phase fluctuations than an ordinary vacuum, allowing scientists to better detect gravitational waves.

In addition to increasing LIGO’s ability to detect gravitational waves, the new quantum squeezer may also help scientists better extract information about the sources that produce these waves.

“We have this spooky quantum vacuum that we can manipulate without actually violating the laws of nature, and we can then make an improved measurement,” Mavalvala says. “It tells us that we can do an end-run around nature sometimes. Not always, but sometimes.”

This research was supported, in part, by the National Science Foundation. LIGO was constructed by Caltech and MIT.