Lights spotted in sky over Adelaide and WA were SpaceX satellites, astronomer says 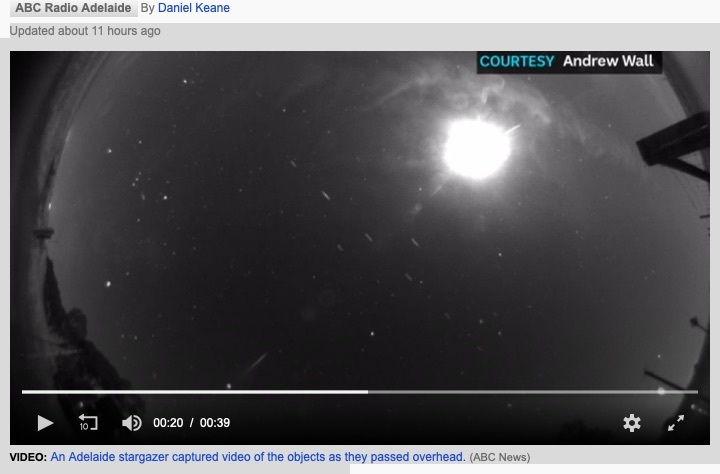 Elon Musk already helps keep the lights on in South Australia — but now he's lighting up the sky.

ABC Radio Adelaide listeners reported seeing the line of as many as 60 objects appearing in the night sky over different parts of the state at about 9:50pm.

The sightings were not confined to SA, however, with residents around other parts of the country including WA also witnessing the event.

"I looked up and I've never seen stars in a straight line before," one listener said.

"I thought 'what the heck's that?' and I suddenly realised they were moving."

Maralinga whistleblower and Balaklava resident Avon Hudson said it was the "most phenomenal thing" he had witnessed "after 50 years of watching the sky".

Another listener was at South Plympton when he saw the objects "moving at an incredible pace".

"There's half a dozen … satellites, planes, stars. They're very high up and there's like a convoy moving through the sky," he said.

"[It] went down from the middle of the night sky all the way to the coast and it went for a good four or five minutes."

Social media users also reported sightings of the strange phenomenon, with one saying they saw the high-speed objects while watching a star of a different kind in Adelaide's Botanic Park:

Some wondered whether it was "Santa doing a test run" — but an astronomer has revealed it was, in fact, Elon Musk's latest project.

Launch of 'constellation' is the first of its kind

Mr Musk — whose Tesla battery near Jamestown provides vital back-up power to South Australia in the event of blackouts — is the founder of SpaceX, which last month launched its latest round of satellites as part of its Starlink project.

Starlink aims to offer broadband internet in the United States and Canada in 2020.

It has already launched more than 120 low-Earth-orbit satellites, with the most recent batch of 60 entering orbit last month.

"Starlink is a project to build a global network of satellites to provide Wi-Fi on the ground and so they fly essentially in a constellation," said Australian National University astrophysicist and astronomer Brad Tucker.

"[With] traditional satellites, you have to orbit the earth every 90 minutes so you can have gaps in satellite coverage.

"If you have a ring of satellites — or a train or a convoy — you don't have that gap.

"This is the very first project trying to do what we call constellation flying, or flying in rows."

Perth Observatory also confirmed the lights were the work of SpaceX.

"Wondering what that train of bright objects flying over WA was tonight?" it tweeted.

"They're SpaceX's Starlink satellites [which] will provide wireless internet around the world."

Dr Tucker said the same phenomenon had been spotted on Wednesday night in eastern parts of the country including Canberra, and would be visible there again tonight.

He said visibility of satellites had to do with their location in relation to both the earth and the sun.

"You see them as reflected sunlight," he said.

While many were impressed by the display, Dr Tucker said Starlink raised potential problems for astronomers — by blocking the view.

"They literally do get in the way of our photos … if there are 40,000 swirling all over, we will not be able to image space from the ground," he said.

"You can do things [like] putting cameras on [satellites] to help with bushfire management which is another project, so you can see there's very big implications.

"But we don't want to sacrifice the ability to see space and understand what's going on."