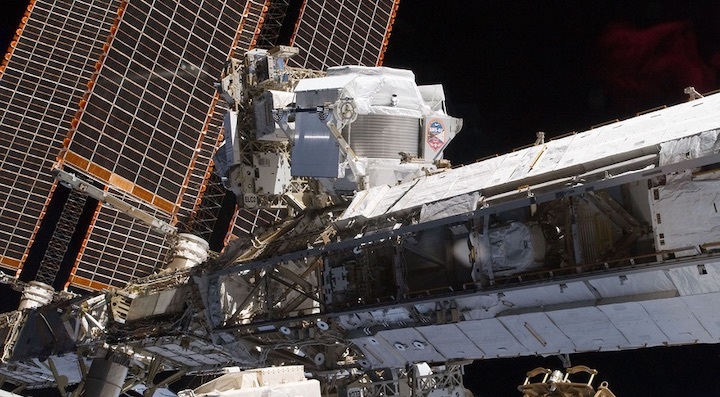 In the first of at least four spacewalks, NASA astronaut Drew Morgan and European Space Agency (ESA) astronaut Luca Parmitano have begun a complicated and challenging series of work days to repair the Station’s Alpha Magnetic Spectrometer experiment. The first EVA was completed on Friday, which also achieved the completion of numerous tasks designated to the second EVA in the series.

Never designed to be serviceable after it was installed outside the Station in May 2011, the Alpha Magnetic Spectrometer (AMS) will require the creation of sharp edges and other hazards in order to bring it back to full operational capacity.

AMS was, for years, a planned external experiment to the International Space Station and was originally scheduled to be delivered to the orbiting outpost in 2005 on Shuttle mission ULF-4.1.

But in the wake of the 2003 loss of the Space Shuttle Columbia and crew, the George W. Bush Administration decided to end the Shuttle program by 30 September 2010 via the minimum number of flights required to complete assembly of the Station. 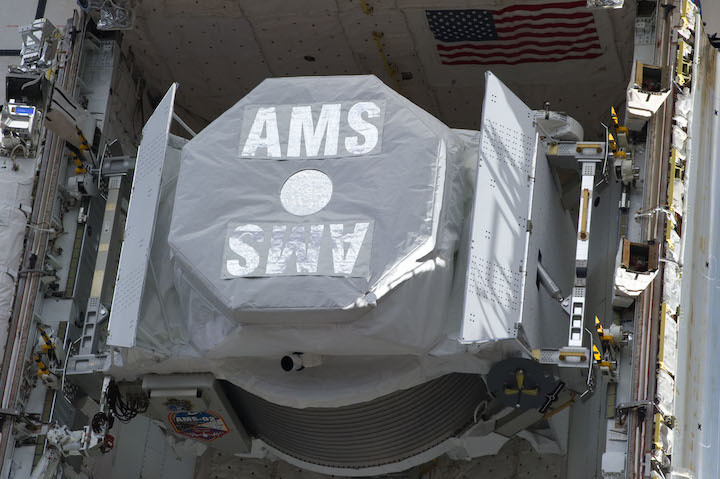 In the decision matrix of which Shuttle flights to cancel to meet the “minimum number necessary” Presidential directive, AMS’s mission was one that failed to make the final Shuttle manifest — despite that manifest containing two optional logistics missions (STS-131 and STS-133), both of which ultimately flew.

In the four years that followed the AMS mission cancellation, NASA, ESA, and the experiment’s supporters tried to find other ways of getting the experiment to the Station, but all proved cost-prohibitive.

Finally, in 2008, AMS’s importance to the particle physics community – given its ability to detect antimatter in cosmic rays (and the high potential to detect evidence of dark matter) – was deemed of such paramount significance that NASA petitioned the U.S. Congress for – and Congress approved – funding to add a Space Shuttle mission to the end of the program’s manifest specifically to deliver AMS to Station.

That mission became the STS-134 flight of the Space Shuttle Endeavour.

It launched from the Kennedy Space Center on 16 May 2011 – marking the 25th and final voyage of the Endeavour.

The joint US-European sponsored experiment saw input from more than 500 scientists from 56 institutions across 16 countries during its development.

When it was attached to the Station in late-May 2011, AMS had a designed operational life of three years.

On 15 November 2015, at the request of the scientific community, NASA began studying ways to perform in-space repairs on the AMS – anticipating that its systems would begin to fail.

Despite this, AMS functioned without issue for six years – double its planned lifetime – until April 2017 when the first of its four coolant pumps failed.

As of today, only one of the four coolant pumps is still working, albeit intermittently.

Without coolant flowing through it, AMS would be a dead experiment.

Enter the ambitious plan to repair an experiment that nobody thought would ever have to be touched.

As such, AMS has numerous sharp edges that pose cutting hazards to Drew and Luca’s EVA (Extravehicular Activity) spacesuits.

It has no handrails or foot restraints for crew to grab hold of or secure themselves to while working with it.

It has bolts that were never designed to be removed in space or captured by the already-available spacewalk tools on the Station.

It has coolant and pressurization lines that cannot be safely vented before the crew goes out to work on it.

It has stainless steel tubes that have to be cut to effect the repair, cuts that will create even more sharp edges the spacewalking crew will have to be cognizant of.

It has components that have to be physically broken off by hand (and cannot be reinstalled) in order for the crew to repair the experiment.

And if that weren’t enough, the entire first spacewalk of the four EVA series is devoted entirely to removing AMS’s outer debris shield — which Drew Morgan then has to physically throw away off the Station.

Normally, spacewalking crews do everything possible not to lose equipment overboard of Station when performing EVAs as those objects become debris hazards for other satellites and ISS visiting spacecraft.

What’s more, EVAs usually have more than a single main objective — unless that objective is relatively large (i.e. attaching an entire power-generating truss to the Station).

All told, the complexity of the task ahead of Drew and Luca required NASA to develop 25 new tools.

The creation was done in collaboration with – among others – the Goddard Space Flight Center (that provided updated tools modified from the five Shuttle missions that upgraded the Hubble Space Telescope) and Universities across the United States.

Perhaps no better way to relate the complexity of this spacewalk series is the fact that the first EVA is entirely dedicated to removing a single debris shield from AMS.

After egressing the Quest Airlock, Luca (EV-1) moved to the Worksite Interface (WIF) extender and picked it up.

Meanwhile, Drew (EV-2) began the first of several trips from and to the Airlock to bring the numerous toolbags needed for the EVAs out to the worksite between ELC2 and AMS on the port truss.

While Drew made these back-and-forth trips, Luca moved to Canadarm2 where he installed the WIF extender and then ingressed the articulating portable foot restraint on the end of the arm.

For this EVA, Luca attached himself to the end of the Station’s arm and was driven to the worksite by Dr. Jessica Mier and Christina Koch working in the Cupola module at the Robotics Work Station. 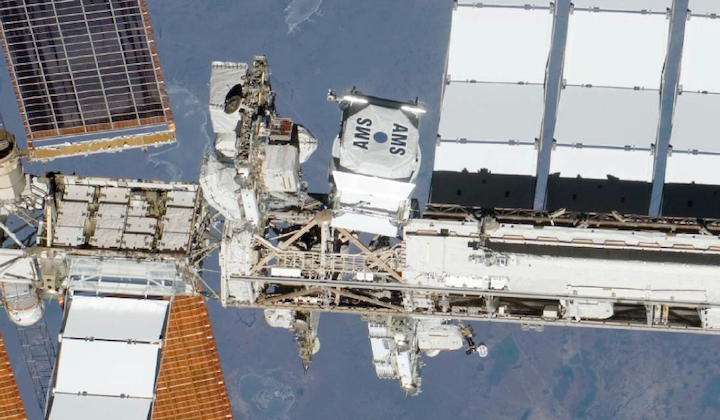 Jessica and Christina drove the Canadarm2 in a sweeping motion to bring Luca up and over the port truss and slowly maneuver him into the small space between AMS and ELC2.

Numerous areas of tight clearances had to be navigated via verbal communication between Luca, Drew, Jessica, and Christina throughout the EVAs.

When Luca was at the worksite, Drew gave him a handling mechanism from one of the toolbags, and Luca attached it temporarily to the side of AMS.

Once that is installed, Drew will hand him another of the new tools designed specifically for the AMS repair EVAs.

The first tool is heritage from Hubble and built by the Goddard Space Flight Center.  Essentially a fancy screwdriver, the tool has a hex bit that allows the non-captive fasteners securing the debris shield to AMS to be retracted into forks and be scooped up and captured between the forks and a bit – preventing them from floating away into space.

Once a fastener was removed, Luca inserted it into a capture block, pushing the fastener into a hole and screwing it into place so the fastener stayed behind.

He then repeated this process for all of the fasteners accessible with this tool.

However, because of the tight clearances, not all fasteners are accessible with this new tool.

For those that aren’t, another new tool was designed: a capture cage.

Instead of removing the non-captive fasteners, the capture cage tool is attached over each fastener.  Luca then inserted the drill to remove the fastener, which was then released into a cage where it was safely contained and can’t float away into space.

All told, a dozen non-captive fasteners were removed — a tedious and slow process.

Once all non-captive fasteners were released, Luca removed the debris shield and attached it to the handling mechanism.

With a firm grip on the handling mechanism, Luca removed it (with the debris shield still attached) from the side of AMS and handed it off to Drew.

Drew will then turned aft from the Station and throwed it overboard.

The debris shield is too big to bring inside the ISS, so throwing it overboard for eventual burn up in the atmosphere is the only way to dispose of it.

Luca will then installed three handrails, a single diagonal beam handrail and two vacuum case handrails, which will allow him and Drew better access and mobility at the work site in preparation for EVAs 2, 3, and 4.

Thanks to being ahead of schedule, the team also worked several tasks involved with the second EVA in the series.

This included the second jettison of the day, involving the removed Vertical Support Beam Cover.

The spacewalkers also cut into the MLI covers that encase the tubing to the cooling system they will be working on in the upcoming spacewalks.

That will complete the first EVA.