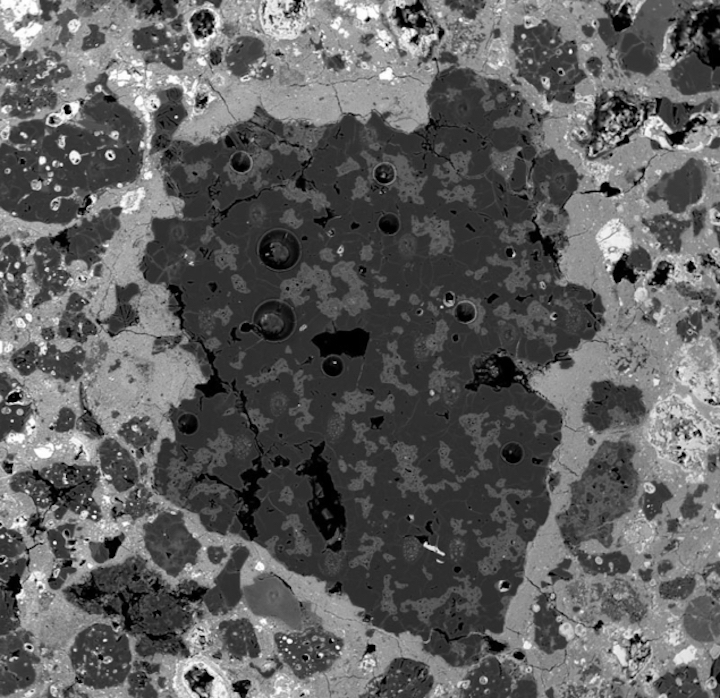 The first solid materials in the solar system could have formed in a matter of days, rather than the few thousand or tens of thousands of years estimated previously. This is the conclusion of a team of researchers who used secondary ion mass spectrometry (SIMS) to measure the isotopic composition of minerals in chondritic meteorites – primitive objects left over from the era when solid material was just beginning to condense around the Sun. The result sheds new light on conditions in this era and provides additional data for modelling the formation of planetary systems.

Both stars and planets are believed to form via the gravitational collapse of discs of hot gas and dust. In our solar system, material in this protoplanetary disc began accruing around 4.5 billion years ago, and scientists had thought that the accretion process took place over many thousands of years, as dust particles condensed and collided together.

There is, however, some uncertainty about exactly when the materials began to condense. Theories based on the cooling rates of igneous materials refer only to melting and crystallization rates of solids, rather than the original gas-solid condensation. An alternative method based on the radioactive decay of 26Al into 26Mg (a process characterized by a half-life of 730,000 years) places an upper bound of a few tens or hundreds of millennia for the so-called condensation epoch but gives hardly any information about how long individual condensates took to solidify.

In the new work, a team led by Yves Marrocchi of the University of Lorraine in France studied chondritic meteorites, which are known to incorporate some of the oldest solids in the solar system. Among other substances, these meteorites typically contain calcium- and aluminium-rich inclusions (CAIs); millimetre-to-centimetre-sized high-temperature complex assemblages of refractory oxides and silicates; and amoeboid olivine aggregate (AOAs), which are fine-grained aggregates of olivine containing varying amounts of CAI-like materials.

The team focused on AOAs because these materials have never undergone any melting, and they experienced only slight thermal annealing during the formation of the solar system. The researchers therefore believe that they represent fairly pristine condensates. AOAs are also valuable in that they record how olivine condensed. This is important because olivine is not only the main component of the Earth’s upper mantle and a common mineral in its subsurface, it also represents a third of all chondritic matter – the most abundant material by mass after ice.  AOAs are thus more representative of the protoplanetary disc than CAIs.

Marrocchi and colleagues characterized the oxygen, silicon and magnesium isotopic compositions of magnesium-rich olivine grains in AOAs in small sections of three carbonaceous chondritic meteorites. These meteorites were the Kaba N4705 (kept at the Natural History Museum in Vienna), the Northwest Africa 5958 (from the Muséum National d’Histoire Naturelle in Paris) and the Miller Range 07342 (from the NASA Antarctic Search for Meteorites Program). The method they used, SIMS, works by firing a beam of positive ions onto the sample surface, thereby liberating secondary, negative, ions. These ions are then accelerated into an analyser and separated according to their mass, producing a spectrum of the sample’s chemical and isotopic composition.

The researchers sputtered their olivine samples with a primary Cs+ beam accelerated to an energy of 10 kV. This generated secondary Si– ions, which the team accelerated to 10 kV and analysed in metallic cups that can catch charged particles in vacuum. They then measured the resulting current and used it to calculate the number of ions hitting the cup.

In such experiments, stable isotope compositions are expressed as delta (δ) values that vary from a standard value by parts per thousand and represent the proportion of an isotope in a sample. Higher (or less negative) δ values indicate increases in the proportion of the isotope relative to the standard, while lower (or more negative) δ values indicate decreases. Marrocchi’s team employed standards of San Carlos olivine, synthetic forsterite, quartz and diopside.These were chosen because they show variable silicon isotope compositions that can be used to tune the mass spectrometer and check its stability, explains Marrocchi.

The researchers say they found large mass-dependent silicon isotopic variations in the AOA samples with δ29Si values ranging from −5.1 to −1.0‰ and δ30Si values ranging from −9.7 to −0.2‰. This negative silicon isotopic composition can only be explained if the primordial dust of the solar system formed rapidly – within a few days, Marrochi tells Physics World.  “We would not have observed these negative values if formation had been slow (at a few thousand or tens of thousands of years),” he adds. This is because a slower cooling process would have given the three isotopes of silicon, 28Si, 29Si and 30Si, time to come to equilibrium in the solids. In rapid condensation, on the other hand, 28Si, which decays faster than 29Si or 30Si, would impinge on the solids more rapidly and would thus be enriched relative to the other isotopes. Subsequent thermal annealing produced the AOAs as we see them today, homogenizing their Mg compositions without affecting their Si isotopic compositions.

Jan Render, a researcher at the Institute for Planetology at the WWU Münster, Germany, says that while refractory components of chondritic meteorites were believed to have formed within short time-frames, the lack of temporal resolution in previous studies made it difficult to pin down exactly how short. “Marrocchi and co-workers circumvent this by combining quantitative isotope measurements with physical modelling,” says Render, who was not involved in the study. “The brief formation timescales they infer also suggest a highly turbulent disc, which provides important insights into the dynamics during the earliest period of our solar system. It will be very interesting to see how this numerical model approach compares with future studies on meteoritic materials and experimental testing.”

The team reports its work in PNAS, and its members plan to repeat the SIMS measurements on other types of meteorites.