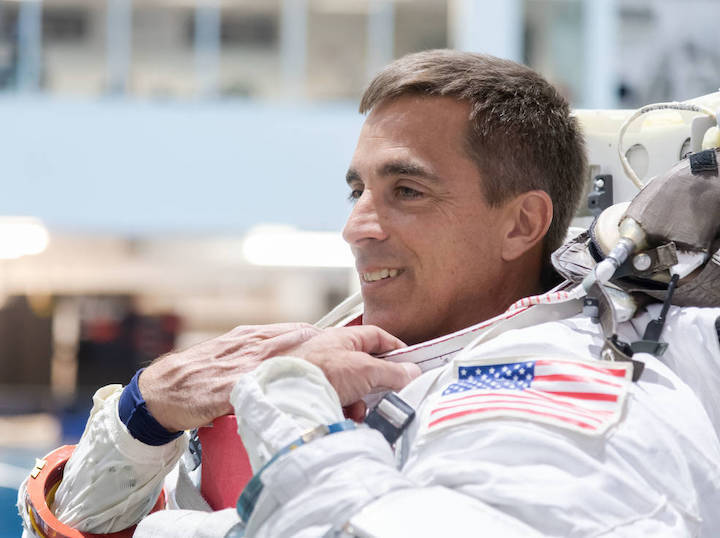 NASA astronaut Chris Cassidy suits up for spacewalk training at the Neutral Buoyancy Lab at NASA’s Johnson Space Center in Houston in preparation for his upcoming Expedition 63 mission to the International Space Station.
Credits: NASA/James Blair

The briefing will air live on NASA Television and the agency’s website. The crew will be available for in person and remote media interviews following the news conference.

To request credentials to participate in person or to reserve an interview opportunity, U.S. reporters must contact Johnson's newsroom at 281-483-5111 by 5 p.m. Wednesday, Nov. 6. Media who wish to participate in the news conference by telephone must call Johnson's newsroom no later than 1:45 p.m. Nov. 6. Those following the briefing on social media may ask questions using #AskNASA.

Cassidy, Babkin and Tikhonov will arrive at the station as NASA flight engineers Jessica Meir and Drew Morgan, along with Expedition 62 commander Oleg Skripochka of Roscosmos, wrap up Expedition 62. When Meir, Morgan and Skripochka depart the orbital outpost, Cassidy will become commander of Expedition 63. He and his crewmates are expected to remain aboard the station until October 2020.

This will be the third spaceflight for Cassidy, who considers York, Maine, to be his hometown. He earned a bachelor’s degree in mathematics from the U.S. Naval Academy and a master’s degree in ocean engineering from Massachusetts Institute of Technology. Before NASA selected him as an astronaut in 2004, he spent 11 years as a member of the U.S. Navy SEAL Team and deployed to the Afghanistan region two weeks after the Sept. 11, 2001, terrorist attacks. He achieved the rank of Navy captain in 2014 and remains on active duty.

Cassidy’s first spaceflight was as a mission specialist aboard space shuttle Endeavour for the STS-127 mission in 2009, when he became the 500th person to fly in space. During the 16-day mission, Cassidy participated in three spacewalks to help install the Japanese Kibo laboratory’s exposed facility and replace solar array batteries on the Port 6 truss of the space station.

His first long-duration mission was in 2013 as part of Expeditions 35 and 36. He took part in three more spacewalks during his six-month stay. He has spent 182 days in space, and 31 hours and 14 minutes spacewalking.

This is the first flight for both Tikhonov and Babkin.

The next three-man crew to launch on a Soyuz rocket — comprising two Russian cosmonauts and a veteran NASA astronaut — is training to have the International Space Station to themselves after their arrival at the orbiting research outpost in April, at least until new U.S. commercial crew ships enter service.

The next Soyuz crew is scheduled to launch April 9 from the Baikonur Cosmodrome in Kazakhstan to kick off an expedition planned to last around six-and-a-half months.

Cosmonaut Nikolai Tikhonov will command the Soyuz MS-16 spacecraft, and Andrei Babkin will serve as the primary flight engineer. Both will launch on their first space missions.

NASA astronaut Chris Cassidy — making this third spaceflight — will join Tikhonov and Babkin on the Soyuz launch. Cassidy will become commander of the space station’s Expedition 63 crew once the Soyuz docks with the orbiting complex.

“What we’re preparing for … is a six-month duration where it’s just the three of us,” Cassidy said Thursday. “That’s why we’re getting a lot of extra training at specialist levels for Andrei and Nikolai on all the U.S. side equipment.”

Cassidy’s seat on the Soyuz MS-16 mission is the last Soyuz seat currently under NASA’s control. NASA assigned Cassidy to the mission in place of Japanese astronaut Akihiko Hoshide after delays in the readiness of new Boeing and SpaceX commercial crew ships.

“We have a great partnership with JAXA, and we would love to be able to have JAXA (the Japan Aerospace Exploration Agency) with us there, but because we haven’t had commercial crew ready yet, we want to make sure that we don’t de-crew (with U.S. astronauts),” Bridenstine said last month in an interview with Spaceflight Now. “Remember, this is a $100 billion investment by the American taxpayer. For us to de-crew it, I think, would be inappropriate.”

Cassidy, Tikhonov and Babkin will join three other crew members on the space station for a little more than a week. After the handover, the outgoing crew will return to Earth, leaving Cassidy and his crewmates in orbit.

Tikhonov is training to use a U.S. spacesuit — known as the Extravehicular Mobility Unit — for possible spacewalks outside the station. Four Russian cosmonauts have performed spacewalks with U.S. spacesuits, most recently in 2007, before the space station crew size was expanded from three to six.

Babkin is training to operate the space station’s Canadian-built robotic arm, which would be used to assist the spacewalker if they needed to head outside for repair duties. The arm is also required to capture arriving cargo ships, such as those launched by SpaceX, Northrop Grumman and Japan.

With brief exceptions, the space station has typically been crewed with six people since 2009. The station operated with a three-person crew for two months late last year after a Soyuz crew aborted their launch due to a rocket failure.

“With luck, we’ll have commercial crew, whichever one it is, and who knows, but we’ll have some visitors, and we’ll be excited for that,” Cassidy said. “But we’re also ready operationally, mentally — all that — prepared to just be the three of us on the space station, which will be a change in operations really if you think about it from what we are used to today, where we have six people.

“The station is still a mechanical system, so it has its hiccups, but we’ve pretty much flushed those hiccups out really well, and we can focus intently on what the goal is, and that’s to do science and research,” Cassidy said. “And we can do a lot of it with all those available crew hours.

“There will be less available crew hours (with three crew members) because you still have to devote your baseline hours per week to keeping the thing running,” he said. “So it’ll be a slight change in philosophy in how we manage crew time, but more or less, the goal is still the same — to maximize science hours and research — and we’ll do our best to do that.” 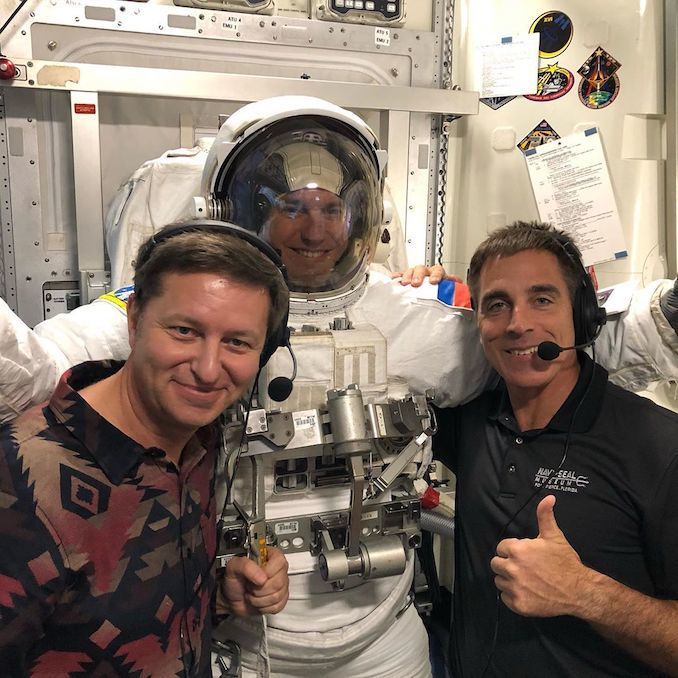 Bridenstine has said that NASA is likely to purchase one or more additional Soyuz seats from Russia’s space agency — Roscosmos — to ensure the space station remains staffed with at least one U.S. crew member through 2020, following Cassidy’s return to Earth next October.

The additional Soyuz seat purchase would guarantee U.S. crew access to the station in the event of further delays in the commercial crew program. Once Boeing’s Starliner and SpaceX’s Crew Dragon spacecraft begin flying astronauts to the station, NASA and Roscosmos will enter a barter arrangement in which Russian cosmonauts and NASA astronauts launch on U.S. and Russian spaceships.

The “in-kind” agreement will not include an exchange of funds. Until the U.S. capsules are certified, NASA must pay Russia to launch its astronauts. The price of a Soyuz seat was more than $80 million in NASA’s most recent contract with Roscosmos.

NASA officials currently expect at least one of the new U.S. commercial crew vehicles to be ready to carry astronauts to the space station in the first half of 2020. The three-person crew on Boeing’s Starliner spacecraft are slated to spend up to six months on the station. The two-man crew on SpaceX’s Crew Dragon test flight was scheduled for a shorter week-long stay on the station, but NASA managers are considering extending the Crew Dragon mission to last several months.

The first Starliner and Crew Dragon missions with astronauts are officially designated as test flights. Once the crewed test flights are complete, the ships will be formally certified by NASA to begin regular crew rotation missions to the space station.