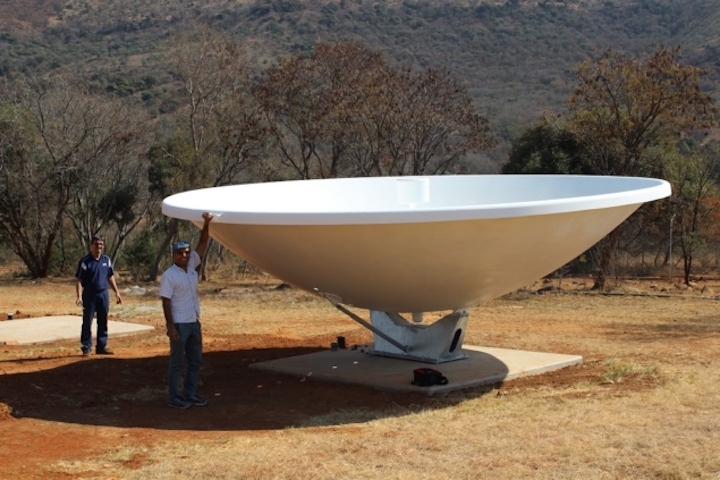 Scientists working on a new R70m ($5m) radio telescope array in South Africa have begun collecting data on two prototype dish designs that will form the Hydrogen Intensity and Real-time Analysis eXperiment (HIRAX). Tests on the two 6 m dishes, which began in August, will end in December when a call will be made for firms to bid to build the first prototype array.

Once fully operational, HIRAX will consist of 1024 dishes installed in the Karoo region in South Africa. The array will study dark energy as well as track neutral hydrogen gas on cosmic scales. HIRAX will also detect fast radio bursts — high-energy astrophysical phenomenon that consists of millisecond radio pulses — and be used to pinpoint their location. Indeed, such bursts are hard to detect and localize as they are so brief, and most telescopes only observe a small region of the sky.

Scientists on the HIRAX project began working on the dish design last year in collaboration with South African-based partners including the South African Radio Astronomy Observatory in Hartebeesthoek outside Johannesburg.  Funding for the HIRAX prototype dishes has been provided by the University of KwaZulu Natal and South Africa’s National Research Foundation.

One of the prototype dishes is made of aluminium while the other dish is based on fibreglass. For the coming months, the dishes will be tested to collect the final requirements for the tender of the first 256 dishes. “We’re testing the surface accuracy and parabolic shape of the dish as well as the re-pointing of dishes and associated mechanical requirements and the stability of the structures in the wind,” Kavilan Moodley, HIRAX principal investigator, told Physics World. The dishes will also need to be manually re-pointed every few months allowing the facility to map about a third of the sky over a five-year period.

Carolyn Crichton, HIRAX project manager, says the project’s construction timeline has been reconfigured slightly to match current funding and to cover project risks. “The current schedule will allow us to have an eight-element prototype at the Karoo site in 2020 and the pathfinder array in 2021,” she says. Crichton adds that the team have secured sufficient funding to build the pathfinder array but now plan to raise additional funds to further extend it.