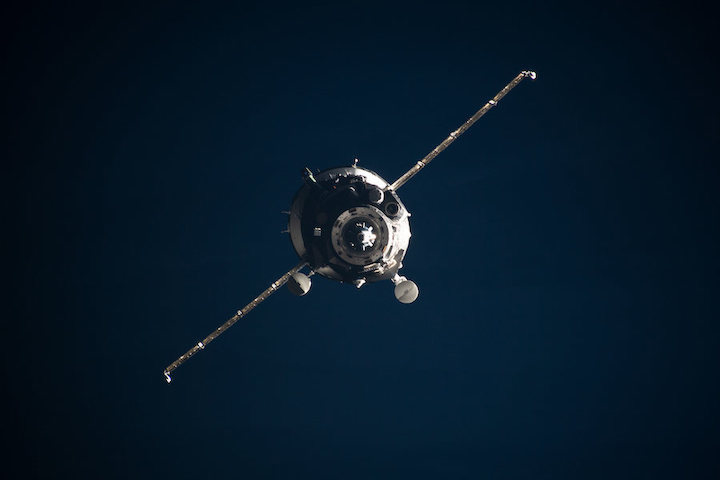 With lingering uncertainly about when new commercial crew spaceships will be ready to launch humans, NASA Administrator Jim Bridenstine said Thursday the space agency will replace a Japanese astronaut with a U.S. space flier on the next Russian Soyuz launch to the International Space Station.

He added that it remains in NASA’s interests to pay Russia for one or more additional Soyuz seats next year to ensure the station remains continuously staffed with at least one American.

In an interview with Spaceflight Now on the sidelines of the International Astronautical Congress in Washington, Bridenstine said ensuring U.S. astronaut access to the space station is paramount as NASA navigates an uncertain transition from relying on Russian Soyuz vehicles for crew transportation to having a mixed fleet of three human-rated spacecraft — Russia’s Soyuz, Boeing’s Starliner and SpaceX’s Crew Dragon.

Bridenstine said he anticipates either Boeing or SpaceX will be ready to carry people into space in the first half of 2020, but that assumes numerous ground and flight tests over the next few months occur on schedule, and with near perfection.

The last confirmed Soyuz seat under NASA’s control will launch from the Baikonur Cosmodrome in Kazakhstan on a mission in April 2020, with a landing scheduled next October. Akihiko Hoshide, a Japanese astronaut, was training for the launch on the Soyuz MS-16 spacecraft

Bridenstine said a U.S. astronaut is now expected to take that seat, which would have allowed Hoshide to be on the station during next year’s Summer Olympics in Tokyo.

“That’s the way it would end up being,” Bridenstine said.

NASA arranges transportation for European, Japanese and Canadian astronauts to the space station, with each partner receiving crew access commensurate with their financial investment in the program.

“It’s an American seat,” Bridenstine said. “Of course, we have a great partnership with JAXA (the Japan Aerospace Exploration Agency), and we would love to be able to have JAXA with us there, but because we haven’t had commercial crew ready yet, we want to make sure that we don’t de-crew.

“Remember, this is a $100 billion investment by the American taxpayer,” Bridenstine said. “For us to de-crew it, I think, would be inappropriate. So I just want to make sure that people understand, we we have our priorities, and one of our priorities is to not de-crew the station. A second priority is to make sure our international partners have opportunities as well.”

Until the the new U.S.-built crew capsules actually fly with astronauts, NASA wants a backup option in place in case of further delays. That means NASA is planning to ask Roscosmos, the Russian space agency, to purchase one or more additional Soyuz seats for crew transportation later next year.

“I think we’re definitely going to need to do that,” Bridenstine told Spaceflight Now Thursday. “Again, it’s a negotiation between NASA and Roscosmos, so there’s another party involved. But it’s definitely going to be in our interests to get additional seats.”

In a press conference later Thursday, Bridenstine said negotiations with Roscosmos on the terms of a new Soyuz seat contract have not begun. He added that it was “highly likely” NASA will make a request to Roscosmos for at least one additional seat, and maybe two.

“We have almost 20 years — we are entering our 20th year — of operating the International Space Station, the entire time having an American on board, and we don’t want to break that that record,” Bridenstine told Spaceflight Now. “We want to make sure that we have an American on-board.

NASA paid more than $80 million per seat to Roscosmos, an entity of the Russian government, the last time it purchased Soyuz seats. Once the new Boeing and SpaceX spaceships are launching regularly, NASA and Roscosmos have an in-kind agreement — without the exchange of funds — to fly Russian cosmonauts on U.S. vehicles and NASA astronauts on Soyuz spacecraft.

The agreement will help ensure Russian and U.S. astronauts are always flying on the station, in the event of problems or groundings of the Soyuz, Starliner or Crew Dragon spacecraft.

But the agreement does not come into force until the Starliner and Crew Dragon vehicles are fully certified, a milestone that will happen after each spacecraft completes at least one test flight to the station with crew members on-board.

In addition to the technical, financial and political factors in deciding to purchase more Soyuz seats, NASA also has legal constraints to worry about. The Iran, North Korea, and Syria Nonproliferation Act, or INKSNA, prohibits the U.S. purchase of Russian high-tech goods and services from Russia, primarily due to Russian support of nuclear and military programs in Iran and Syria.

Congress has waived the law’s impact on NASA’s relationship with Roscosmos through the end of 2020, but the period of performance of a new Soyuz seat contract with Russia would extend into 2021.

“Right now, our American astronaut will be coming home in October of 2020,” Bridenstine said. “And then at that point, we will need to have a replacement, and we don’t have that set up yet.”

SpaceX conducted an unpiloted test flight of its Crew Dragon spacecraft to the space station in March, but the Crew Dragon program fell behind schedule after an explosion destroyed the same vehicle during a ground test of the ship’s abort engines after it returned to Earth.

After finding the likely cause of the explosion and implementing corrective actions, SpaceX is gearing up to repeat the ground abort engine test as soon as Nov. 2, according to a report Thursday published by CNBC.

If that goes well, SpaceX will perform a high-altitude abort test of the Crew Dragon in mid-December, during which the capsule will fire its escape engines to propel itself off the top of a Falcon 9 rocket in flight over the Atlantic Ocean, just offshore NASA’s Kennedy Space Center in Florida.

In the meantime, SpaceX is conducting a series of at least 10 tests of an upgraded parachute design in hopes of resolving safety concerns.

Boeing plans a pad abort test of the Starliner spacecraft as soon as Nov. 4, followed by an unpiloted Starliner flight to the space station set for liftoff from Cape Canaveral as soon as Dec. 17 aboard a United Launch Alliance Atlas 5 rocket.

NASA’s plans to use commercial spacecraft to ferry crews between Earth and the space station have faced delays. When the space shuttle retired in 2011, NASA said commercial crew capsules could be carrying astronauts to orbit by 2015, but Congress did not appropriate NASA’s requested funding for the program for several years, triggering a delay in the first human flight from 2015 to 2017.

NASA awarded Boeing and SpaceX contracts worth up to $4.2 billion and $2.6 billion, respectively, in 2014 to proceed into full development of the Starliner and Crew Dragon spacecraft. Since Congress began fully funding the commercial crew program, launches of the crew capsules with people have been delayed from 2017 to 2020.

Amid the delays, NASA has taken several other measures to reduce the risk of a gap in U.S. crew access to the station.

NASA has extended the first piloted test flight of Boeing’s Starliner spacecraft, originally planned for a short duration, to last up to six months. Boeing test pilot Chris Ferguson and NASA astronauts Mike Fincke and Nicole Mann will live on the station during that time.

NASA has also lengthened some astronaut stays on the station from six months to nearly a year to stretch out the crew rotation schedule.