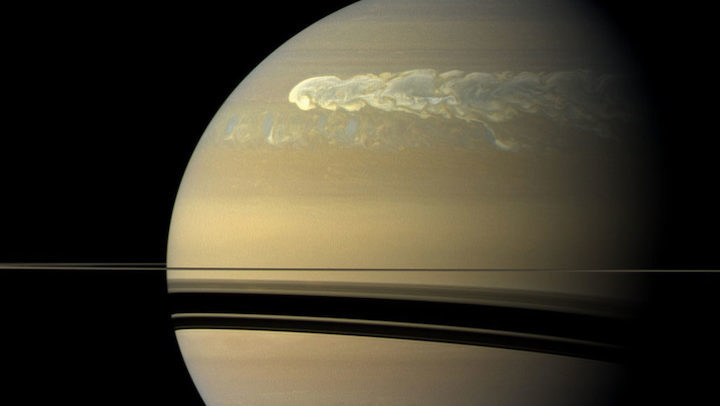 Until now, astronomers had seen only two kinds of Saturnian storms: relatively small storms about 2,000 kilometers across that appear as bright clouds for a few days and Great White Spots that are 10 times as large and last for months (SN: 4/14/15). The newly spotted weather disturbance was a series of four midsize storms. Each was several thousand kilometers across and lasted between about 1.5 weeks and about seven months.

Saturnian storms are thought to originate in water clouds hundreds of kilometers below the planet’s visible upper cloud cover. Studying such storms can offer a window into deep atmospheric goings-on that aren’t directly observable, says Agustín Sánchez-Lavega, who studies planetary atmospheres at the University of the Basque Country in Bilbao, Spain.

Sánchez-Lavega and colleagues analyzed hundreds of telescope images taken by amateur astronomers, as well as pictures from by the Calar Alto Observatory in Spain and NASA’s Hubble Space Telescope. From late March to late October 2018, four unusual bright spots appeared in Saturn’s atmosphere near the North Pole, between the latitudes of 67° N and 74° N.

Computer simulations indicate that each midsize storm required about 10 times as much energy as a small storm to get going, but only about one-hundredth the energy required to brew up a Great White Spot. 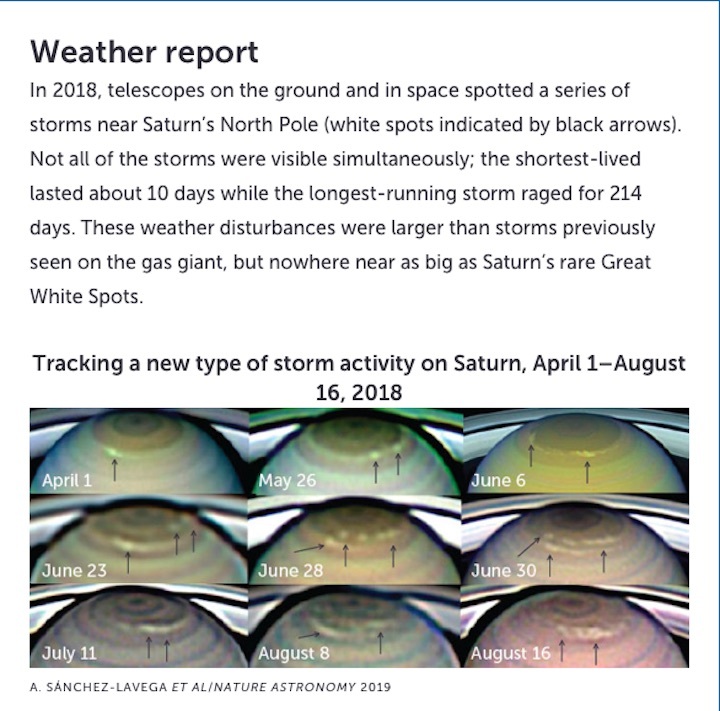 The sighting of this storm outbreak “almost leaves more questions than it can give answers,” says Georg Fischer, a planetary scientist at the Space Research Institute of the Austrian Academy of Sciences in Graz not involved in the work.

For instance, the 2018 telescope images don’t show whether the newfound storms crackled with lightning. Small storms typically boast a few flashes per minute and Great White Spots several flashes per second. If similar midsize storms appear in the future, Fischer says, radio telescopes that monitor the gas giant’s tempests for lightning strikes could indicate whether middling storms are more similar to their small or giant counterparts. That might help scientists figure out how they form.

It’s possible that a 2010 Great White Spot that formed farther south siphoned so much energy from Saturn’s atmosphere that there was only enough left to fuel a few middling storms, rather than a full-blown Great White Spot in 2018, Sánchez-Lavega says.

But planetary scientist Robert West, who wasn’t involved in the study, is skeptical that the 2010 Great White Spot could have interfered with storm activity farther north. That’s because gas swirling in Saturn’s atmosphere at different latitudes tends to stay in its own lane. West, of Caltech and NASA’s Jet Propulsion Laboratory in Pasadena, Calif., suspects that the storm sequence in 2018 was not a failed Great White Spot, but “a whole different thing.” For now, however, the origins of those intermediate storms and how they relate to other weather phenomena on Saturn are still mysterious, he says.