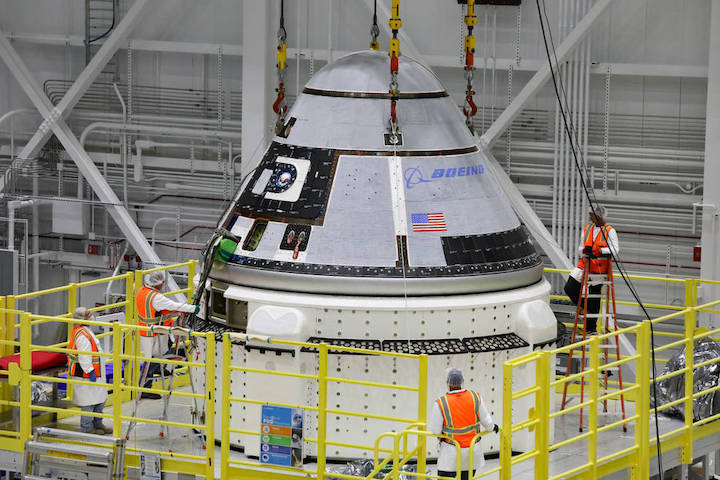 The crew module of Boeing’s CST-100 Starliner spacecraft is lifted onto its service module on Oct. 16 inside the Commercial Crew and Cargo Processing Facility (C3PF) at Kennedy Space Center in Florida ahead of the company’s Orbital Flight Test to the International Space Station as part of NASA’s Commercial Crew Program.
Credits: Boeing

Media accreditation is open for two-days of activities in mid-November for the next milestone in NASA’s Commercial Crew Program, as Boeing’s CST-100 Starliner is transported for integration on a United Launch Alliance (ULA) Atlas V rocket.

The spacecraft will be moved from its production facility to its launch site in Florida ahead of the company’s uncrewed Orbital Flight Test to the International Space Station.

Activities will take place at NASA’s Kennedy Space Center in Florida and neighboring Cape Canaveral Air Force Station. Media accreditation is open only to U.S citizens and the deadline for registration is 11:59 p.m. EDT Sunday, Oct. 27. The exact date of transport activities is still to be determined.

All accreditation requests should be submitted online at:

For questions about accreditation, please email ksc-media-accreditat@mail.nasa.gov. For other questions, contact Kennedy’s newsroom at 321-867-2468.

Media with special logistics requests, such as space for satellite trucks, trailers, tents, electrical connections or work spaces, must contact Tiffany Fairley at tiffany.l.fairley@nasa.gov by Oct. 27.

During the event, the fueled Starliner will be moved from Boeing’s Commercial Crew and Cargo Processing Facility at Kennedy to ULA’s Space Launch Complex 41 Vertical Integration Facility on Cape Canaveral Air Force Station. Later the same day, the spacecraft will be stacked on top an Atlas V rocket for final processing ahead of the launch.

Media activities will include tours, interviews with subject matter experts, viewing the spacecraft transport, and a photo opportunity of the integrated Starliner and Atlas V.

Boeing’s uncrewed flight test will provide valuable data on the end-to-end performance of the rocket, spacecraft, and ground systems, as well as in-orbit, docking and landing operations. The data will be used toward certification of Boeing’s crew transportation system for carrying astronauts to and from the space station.

NASA’s Commercial Crew Program is working with the American aerospace industry through public-private partnerships to launch astronauts on American rockets and spacecraft from American soil for the first time since 2011. The goal of the program is safe, reliable and cost-effective human space transportation to and from the International Space Station, which could allow for additional research time aboard the station and increase the opportunity for discovery aboard humanity’s testbed for exploration.