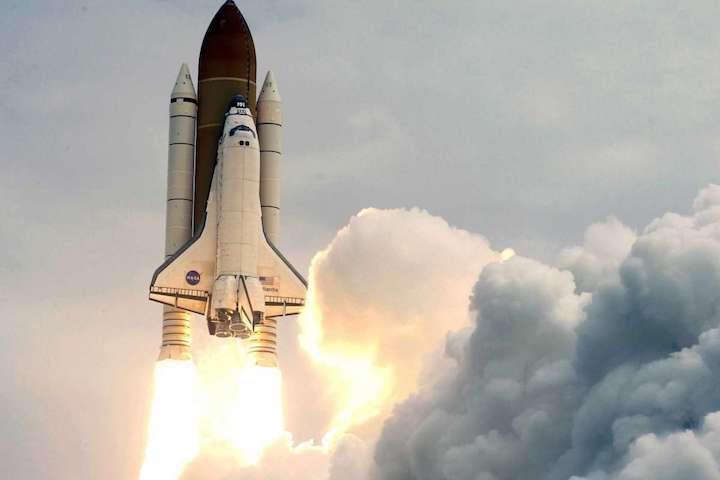 The lagoons surrounding the space shuttle launch pads were filled with dead fish after most liftoffs during the 30-year program.

Sometimes, 100 fish were killed. Other times, 1,000. But the culprit was always the same: a cloud of acidic mist and dust that spread up to five miles around the pad, leaving deposits on nearby buildings and plants.

But the 135 launches, which began in 1981, also had effects more difficult to see. The solid rocket boosters sent hydrochloric acid and aluminum northward from the launch pad in a ball of flames; iron and zinc particles were measured at higher rates; increases in calcium, potassium and sodium were discovered in soil near the launch sites.

These impacts were detailed in a 2014 study of the program. But NASA still does not conduct general environmental studies on the impacts of space launches on the land, sea and air.

For over half a century, space exploration has expanded our knowledge of Earth; led to major scientific discoveries such as the microchip; and inspired generations of young people to study science, technology, engineering and math.

But as the country strives to colonize another celestial body, little is known about how these endeavors affect life on Earth. The few formal studies focused on the environmental impacts of rocket launches have examined the ozone layer, which acts as Earth’s shield against the sun’s ultraviolet radiation.

Scientists involved admit there are significant gaps in knowledge about the effects of chemicals emitted when rocket lifts off, including alumina, chlorine and black carbon, on the air.

And experts cannot point to a single researcher who has examined the impact of discarded rocketry on the ocean, where pieces of space machines are sometimes left to become reefs.

But tracking these impacts is about to become even more important.

Commercial companies are launching rockets more often, and NASA is on a quest to put humans on the moon again using shuttle-derived rocket boosters and engines.

“While we have some ideas and some course modeling done 10 years ago, we really can’t say with any degree of certainty how a rapidly growing launch industry will affect the global atmosphere,” said Marty Ross, senior project engineer for civil and commercial launch projects at The Aerospace Corporation in California. Ross authored a study on rocketry and air quality.

As the American public’s enthusiasm for NASA’s reusable space plane escalated in the 1970s, agency personnel behind the scenes were preparing to document the local environmental impacts of the machinery required to get 4.5 million pounds into space.

Assessments told them air quality would experience short-term degradation, so they set up monitors to track the hydrogen chloride and aluminum oxide released. They planted radish and pennywort around the pads to determine how plant species would be impacted. They even placed shallow containers of mineral oil around Kennedy Space Center to capture water droplets that were tested for chloride and calcium, according to a 1981 report.

Over the next 30 years, NASA collected information on the shuttle’s impact to the area around Kennedy, documenting the fish kills, the loss of plant species and vegetation cover nearby, the metal flakes blown off Apollo-era railroad tracks and the zinc in the air after the rocket blast stripped coating off the exposed surfaces of the pad and mobile launch platform.

An examination of the first five shuttle flights, published in 1983, found that the acidic cloud released resulted in minor skin irritations that, during the first two launches, caused problems for workers and spectators and “permanent effects to chrome” on nearby cars.

NASA personnel were even concerned about acid rain caused by the "continued precipitation produced by a natural mechanism but incorporating the exhaust cloud byproducts," the report states.

The space shuttle program was shuttered in 2011. Three years later, the agency determined that “no long-term, macro-scale negative responses” occurred, according to the 2014 report.

That report, however, only focused on site-specific impacts. It did not touch on how the launches — which, at the program’s peak, happened seven to eight times per year — might have affected the ozone layer, despite acknowledging this was a concern from the beginning.

Damage to the ozone layer increases the Earth’s exposure to ultraviolet radiation, which is linked to increases in skin cancer, cataracts and damage to plants and marine life. Scientists made headlines in 1985 after discovering a hole in the ozone layer over Antarctica caused by chlorofluorocarbon gases, commonly found in aerosol sprays and refrigerator coolant.

Nearly 200 nations banded together in 1987 to form the Montreal Protocol, which focused on banning substances that caused this hole. And NASA last year documented the first direct proof that the hole was closing, a finding confirmed by the United Nations.

Alumina and black carbon, colloquially known as soot, can be especially problematic for the ozone layer because both are long-lived and accumulate in the stratosphere, causing damage over time. No one knows just how much, however.

Last year was also the first time scientists conducted more than a “passing thought” study on rocket launch impacts, when the U.N. took a look in its Scientific Assessment of Ozone Depletion, Ross said. In 2010, Ross published a “passing thought” study, hypothesizing that impacts on the climate and ozone of black carbon soot emissions from launches would be significant regionally, potentially similar to CFC and aviation.

The United Nations found that rocket launches currently have a small impact on the ozone, but made it clear that significant gaps exist in understanding their effects. For example, the rocket design, launch vehicle size, launch location and fuel type influence how the ozone will be affected.

“These gaps limit the confidence level of predictions of present and future impacts of rocket emissions on stratospheric ozone and suggest periodic assessments are warranted,” the U.N. stated.

NASA is not investigating this at a broad level.

“We do not have a NASA mission for tracking launch impacts,” said Karen Northon, a spokeswoman at NASA headquarters in Washington, D.C.

When NASA officials tested the emergency abort system on the agency’s new moonship during a June launch, they always planned to abandon the rocket booster and space capsule in the Atlantic Ocean.

But when a piece plummeted into shallower water than expected, they dragged it to deeper water. NASA officials did not provide clarity on why this was done.

The June launch is not the first time NASA has left discarded engineering feats at the bottom of the ocean. In 2013, Jeff Bezos, Amazon’s chief executive, famously fished the major components of Apollo 11’s F-1 rocket engine off the floor of the Atlantic Ocean.

But it appears NASA does not keep an account of all the pieces left to the fishes since the space program began 60 years ago, said Don Dankert, manager of the National Environmental Policy Act program at Kennedy.

“I don’t know of any NASA program that tracks it,” he said.

Still, Dankert said, the agency takes appropriate steps to ensure that marine resources are protected as well as possible. Before every launch at Kennedy, an environmental assessment is conducted to determine what, if anything, officials need to be worried about.

If something is to be left in the ocean, he continued, NASA must first acquire permits from the appropriate agencies, such as the U.S. Army Corps of Engineers and the National Marine Fisheries Service.

“Off the coast of the Cape, we don’t have tropical coral reefs or something (of) that nature. They’re really just sandy shoals,” Dankert said. “I’m not saying we don’t have marine resources here, but in the context of what effect this will have on the bottom community, I would suspect fish would be attracted to” the pieces.

By the time the vehicle hit the water in June, Dankert said, it had no fuel left.

Neither Ross nor Dankert could think of anyone who might be studying the impacts of degrading rocketry in the ocean.

The upcoming decades are expected to be busy for space exploration and, therefore, rocket launches.

Commercial companies such as SpaceX and Boeing are planning to launch humans into space within a year. And NASA hopes that humans will return to the moon in 2024 as part of the Artemis program, followed by more regularly scheduled launches from American soil.

Dankert said NASA will continue to conduct environmental assessments for its own launches, but assessing the impacts of commercial space flight is up to each company.

SpaceX and Boeing did not respond to repeated requests for comment on this issue.

Though NASA will track the site-specific effects of rocket launches for the Artemis program, the results may be similar to those of the shuttle program.

The rocket boosters being used on the moon rocket, known as the Space Launch System, are derived from the shuttle era, and the engines are identical.

Hank Miller, deputy manager for Space Launch System Boosters Office, said steps were taken with the new rocket to minimize the impact of the solid rocket motor exhaust to the environment.

For example, shuttle boosters were filled with asbestos — the new boosters are not, he said, adding that the propellant ingredients are similar.

“The booster plume will behave very much the same as shuttle with typical diminution occurring between sea level and staging altitude of approximately 100,000 feet,” Miller said.

That plume will have an “acid constituent,” said Tracy McMahan, spokeswoman for NASA’s Marshall SpaceFlight Center in Alabam, but most of the plume is not made up of acid.

She also noted that the SLS rocket will launch less frequently than shuttle, meaning it will have less of an impact.

Still, Ross said that given these expected launch increases, more attention needs to be paid to the environmental effects of space exploration.

“I think the important thing is to understand what each type of propellant does to atmosphere and then monitor situation to make sure there are no surprises,” he said.

Raumfahrt - As NASA and others launch more rockets, effects on Earth remain a mystery
1054 Views
Created with page4