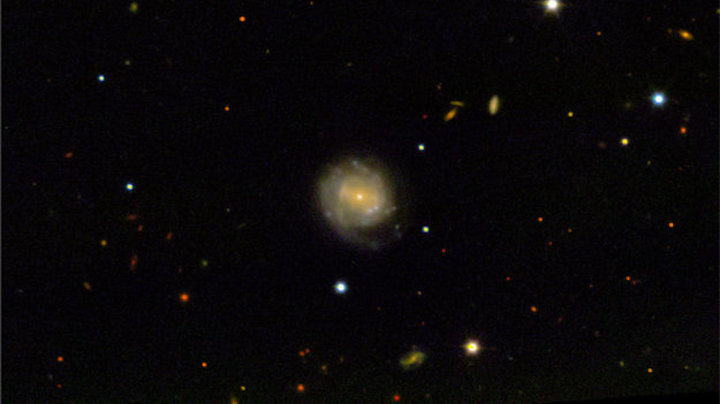 A team of scientists, including a researcher from Queen’s University, have discovered that the fading of infrared light following Type Ia supernovae explosions can be interrupted, with brightness staying the same for up to a year.

This is a surprising finding as astronomers had expected that the light curve would not only continue decreasing but even experience a sharp drop, rather than flattening into a plateau.

The discovery is a huge step forward for astronomers as they use the brightness of these kind of supernovae to measure the rate of expansion of the universe.

To better understand the strange behaviour, the CfA teamed up with Adam Riess of The Johns Hopkins Universityand the Space Telescope Science Institute to study nearby supernovae using Riess’s already-set HST programs.

Dr Luke Shingles from Queen’s University Belfast played a role in interpreting the data. He commented: “This finding is a big surprise and will lead to advanced new simulations to analyse the plateau behaviour in more detail. The discovery will also impact the way astronomers use Type Ia supernova light curves to measure distances, and give us more precise data on the expansion of the universe.”

Or Graur from CfA said: “Most supernova research is conducted in the weeks or months immediately following an explosion, but we wanted to see how light curves behave at late times, around 500 to 1,000 days after explosion.

“Optical observations of SN2012gc in 2015 revealed a slowdown in the light curve as expected, but as we studied additional supernovae over time, it became apparent that other mechanisms were at play, so we started looking for patterns to explain what was going on.”

He added: “Even though these were all nearby supernovae, at these late times they were very faint. We needed Hubble’s resolving power to be able to tell them apart from other stars in their respective galaxies.

“But what made the difference to our observations was that Adam’s programs on Hubble also had near-infrared data in the H-band. What started as a fishing expedition revealed a portion of time where the light curve is flat, and that period lasts for up to a year. That was a surprise. I didn’t expect to see that.”

Dr Shingles said: “One hundred days is not only shorter than the year-long plateau that we found here but a bigger problem is that we think the plateau in Type IIP supernova is caused by hydrogen colliding with electrons, and Type Ia supernovae don’t contain any hydrogen. This means we need a completely different explanation for the plateau in these objects.”

Dr Matt Nicholl, in the School of Physics and Astronomy at the University of Birmingham, says: "Type Ia supernovae produce a lot of iron. We think that the plateau might be related to how the iron atoms behave as they cool. They can absorb ultraviolet light and re-emit it in the infrared, so what we are seeing could be this fluorescence.

"This study really shows the importance of continuing to track supernovae even as they get older and fainter. You see things that are really quite different to the early behaviour, and sometimes we get a nice surprise like this that changes our picture of these explosions.”