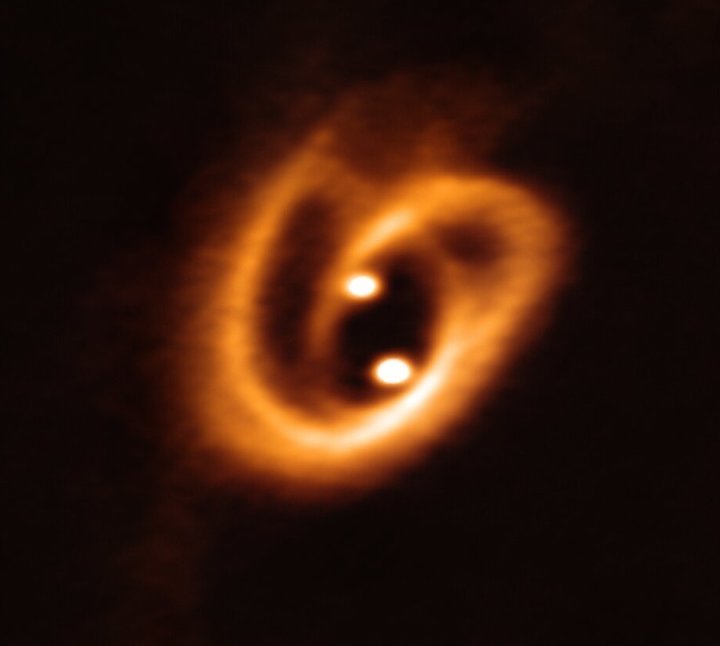 The Atacama Large Millimeter/submillimeter Array (ALMA) captured this unprecedented image of two circumstellar disks, in which baby stars are growing, feeding with material from their surrounding birth disk. The complex network of dust structures distributed in spiral shapes remind of the loops of a pretzel. These observations shed new light on the earliest phases of the lives of stars and help astronomers determine the conditions in which binary stars are born.Credit:ALMA (ESO/NAOJ/NRAO), Alves et al.

Astronomers using ALMA have obtained an extremely high-resolution image showing two disks in which young stars are growing, fed by a complex pretzel-shaped network of filaments of gas and dust. Observing this remarkable phenomenon sheds new light on the earliest phases of the lives of stars and helps astronomers determine the conditions in which binary stars are born.

The two baby stars were found in the [BHB2007] 11 system – the youngest member of a small stellar cluster in the Barnard 59 dark nebula, which is part of the clouds of interstellar dust called the Pipe nebula. Previous observations of this binary system showed the outer structure. Now, thanks to the high resolution of the Atacama Large Millimeter/submillimeter Array (ALMA) and an international team of astronomers led by scientists from the Max Planck Institute for Extraterrestrial Physics (MPE) in Germany, we can see the inner structure of this object.

“We see two compact sources that we interpret as circumstellar disks around the two young stars,” explains Felipe Alves from MPE who led the study.  A circumstellar disk is the ring of dust and gas that surrounds a young star. The star accrete matter from the ring to grow bigger. “The size of each of these disks is similar to the asteroid belt in our Solar System and the separation between them is 28 times the distance between the Sun and the Earth,” notes Alves.

The two circumstellar disks are surrounded by a bigger disk with a total mass of about 80 Jupiter masses, which displays a complex network of dust structures distributed in spiral shapes –  the pretzel loops. “This is a really important result,” stresses Paola Caselli, managing director at MPE, head of the Centre of Astrochemical Studies and co-author of the study. “We have finally imaged the complex structure of young binary stars with their feeding filaments connecting them to the disk in which they were born. This provides important constraints for current models of star formation.”

The baby stars accrete mass from the bigger disk in two stages. The first stage is when mass is transferred to the individual circumstellar disks in beautiful twirling loops, which is what the new ALMA image showed. The data analysis also revealed that the less-massive but brighter circumstellar disk — the one in the lower part of the image — accretes more material. In the second stage, the stars accrete mass from their circumstellar disks. “We expect this two-level accretion process to drive the dynamics of the binary system during its mass accretion phase,” adds Alves. “While the good agreement of these observations with theory is already very promising, we will need to study more young binary systems in detail to better understand how multiple stars form.”

This research was presented in a paper published on 3 October 2019 in the journal Science.