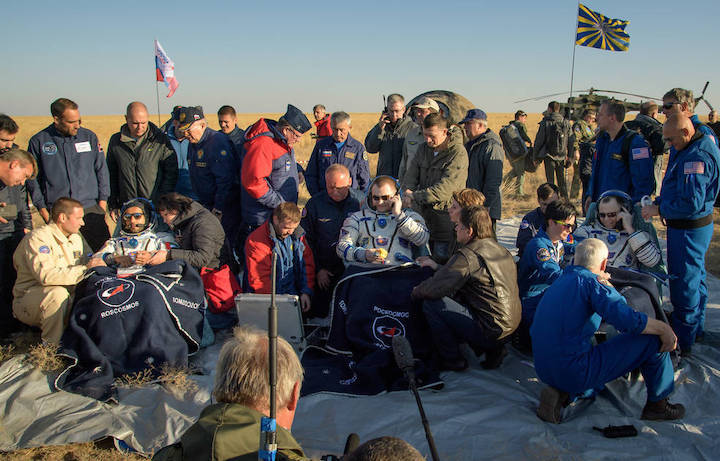 Koch remains aboard the orbiting laboratory for an extended mission that will provide researchers the opportunity to observe effects of long-duration spaceflight on a woman, in preparation for human missions to the Moon and Mars. She is expected to return to Earth in February 2020, almost a year after her launch.

For Almansoori, this landing completed an eight-day stay on the station that covered 128 orbits of Earth and a journey of 3.1 million miles since launching Sept. 25 with NASA astronaut Jessica Meir and Oleg Skripochka of Roscosmos. Almansoori made history as he became the first person from the UAE to fly in space.

The Expedition 60 crew contributed to hundreds of experiments in biology, biotechnology, physical science and Earth science, including investigations into devices that mimic the structure and function of human organs, free-flying robots, and an instrument to measure Earth’s distribution of carbon dioxide.

Hague’s first two spacewalks in March continued the overall upgrade of the station’s power system with newer, more powerful lithium-ion batteries on one pair of the station’s solar arrays. During his third spacewalk, he and NASA astronaut Andrew Morgan successfully installed the second of two international docking adapters that Boeing CST-100 Starliner and SpaceX Crew Dragon commercial crew spacecraft will use to connect to the space station.

Hague completes his second flight in space totaling 203 days, while Ovchinin has now spent 375 days during three flights. Hague and Ovchinin flew together on an abbreviated mission in October 2018, cut short by a technical problem that triggered an ascent abort minutes after launch and a safe landing back on Earth.

When the Soyuz MS-12 spacecraft with Hague, Ovchinin and Almansoori undocked at 3:37 a.m. Oct. 3, Expedition 61 officially began aboard the station, with NASA astronauts Koch, Meir and Morgan, cosmonauts Alexander Skvortsov and Oleg Skripochka of Roscosmos as flight engineers, and ESA (European Space Agency) astronaut Luca Parmitano as the station’s commander.