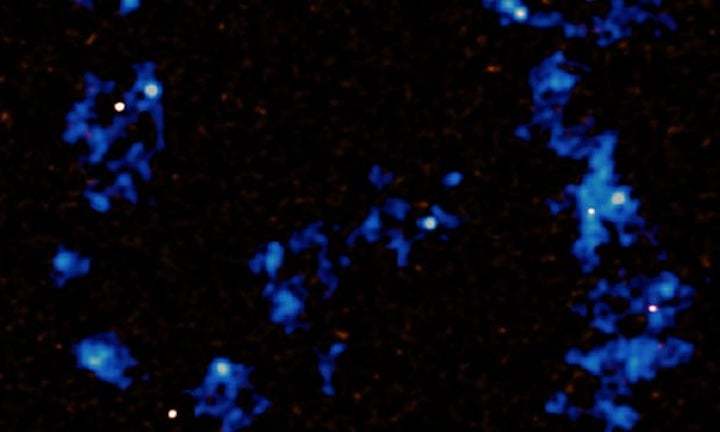 The cosmic web, a vast, mysterious structure that links up far-flung galaxies, has been observed directly for the first time.

The observations reveal that an ancient cluster of galaxies about 12bn light years away in the constellation of Aquarius are linked together by a network of faint gas filaments. The existence of the cosmic web is central to current theories of how galaxies first formed following the big bang, but until now evidence for it had remained largely circumstantial.

The direct detection of the web came following intensive observations designed to pick up the faintest known structures. Prof Michele Fumagalli, an astrophysicist at Durham University and co-author of the work, said: “It is very exciting to clearly see for the first time multiple and extended filaments in the early universe. We finally have a way to map these structures directly and to understand in detail their role in regulating the formation of supermassive black holes and galaxies.”

Galaxy clusters are the most tightly gravitationally-bound structures in the universe and can contain hundreds or thousands of galaxies. However, despite the colossal amounts of gas and dark matter they contain, theoretical predictions suggest that most of the gas in the universe resides in the spaces in between clusters. These calculations predict that 60% of the hydrogen created during the big bang is distributed as long filaments strung out across space in the cosmic web.

The latest observations used the European Southern Observatory’s Very Large Telescope to map out the light emitted by hydrogen irradiated by the galaxies within a distant galactic cluster called SSA22. The team were able to detect individual filaments of intergalactic gas spanning young galaxies in a newly forming cluster.

“These observations of the faintest, largest structures in the universe are a key to understanding how our universe evolved through time, how galaxies grow and mature, and how the changing environments around galaxies created what we see around us,” said Erika Hamden, an astrophysicist at the University of Arizona.

The observations of the cosmic web bolster the so-called cold dark matter theory of galaxy formation. This suggests that hydrogen gas created in the big bang collapses first into sheets and then into filaments strung out across space. In places where filaments cross or are clustered together, galaxies form and the filaments continue to fuel the growth of galaxies by feeding them a steady stream of gas.

In line with this theory, the latest observations reveal that the intersection between enormous filaments was home to active galactic centres, containing supermassive black holes and “starbursting” galaxies that have very active star formation. 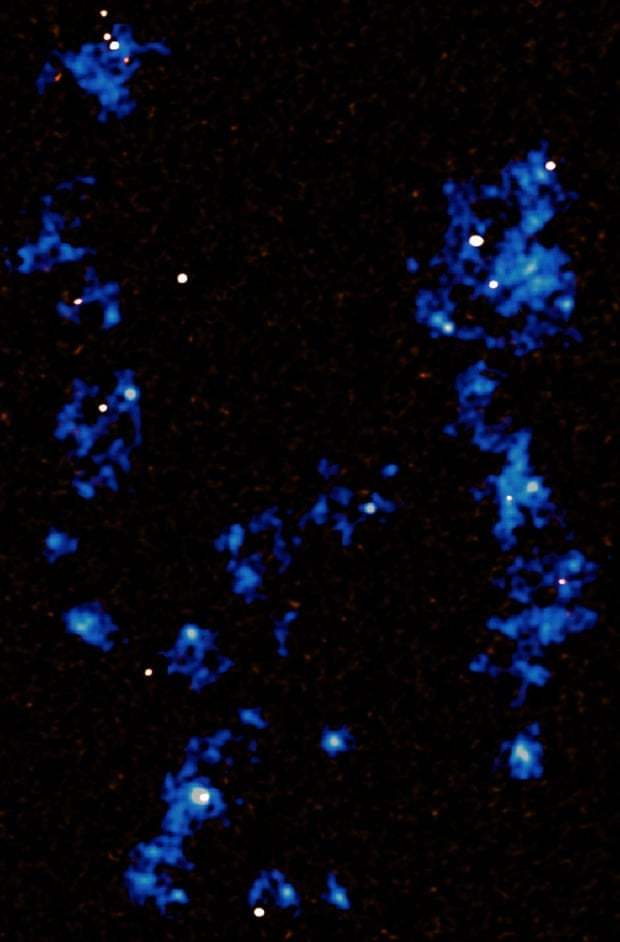 “This suggests very strongly that gas falling along the filaments under the force of gravity triggers the formation of starbursting galaxies and supermassive black holes, giving the universe the structure that we see today,” said Hideki Umehata, of the Riken Cluster for Pioneering Research and the University of Tokyo, and first author of the research.

Previous observations had shown short blobs of gas extending beyond galaxies, but the latest are the first to show extended filaments.

The findings are published in the journal Science.