In 2022, a robotic NASA spacecraft will pay a service call to Landsat 7 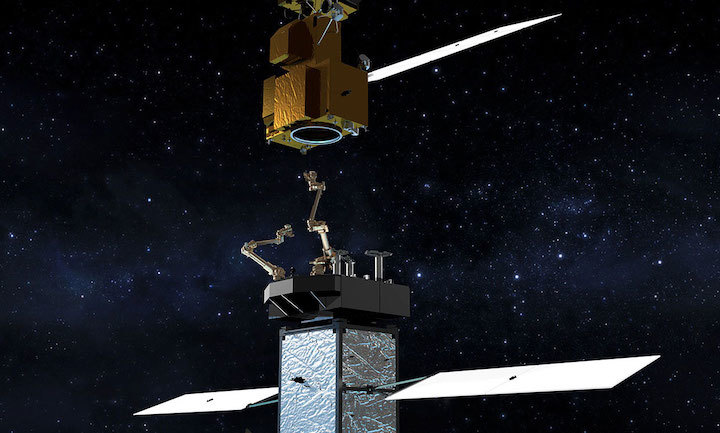 For the foreseeable future, access to space will remain very expensive. Even with tricks like reusing rockets or launching from balloons and giant airplanes, it still costs thousands of dollars per kilogram to put something into low Earth orbit. And once you've put something up there, that thing is generally on its own (with very few exceptions), and hopefully does what it needs to until it runs out of fuel, at which point most satellites are completely useless.

This is, overall, an extraordinarily inefficient system. NASA would like to change this, and thinks that putting gas stations and repair shops in space would be an absolutely smashing idea. A few satellite servicing programs are (more or less) underway, and earlier this year, we visited the Robotic Operations Center at NASA's Goddard Space Flight Center in Maryland to learn more.

Earlier this year, DARPA's Robotic Servicing of Geosynchronous Satellites (RSGS) project was put on hold when prime contractor Maxar Technologies backed out of its contract to put together the system hardware. DARPA has been soliciting new partners for the project and expects to make an announcement by the end of the year, with the idea that the RSGS mission could launch by 2023. Equipped with a pair of robot arms, RSGS is a semi-autonomous spacecraft intended to service satellites in geosynchronous orbits, repairing malfunctions to extend the satellites’ lifetimes. The concept video above illustrates how valuable this can be—a stuck solar panel array can doom an otherwise brand new satellite, and fixing the problem (and potentially saving hundreds of millions of dollars) amounts to just a tiny little nudge in the right place.

While RSGS is focused primarily on satellite repair, refueling is another enormous on-orbit opportunity, since the lifetimes of most satellites are limited by how much fuel they carry. At NASA, a series of robotic refueling missions has sent test hardware to the International Space Station to figure out how best to transfer fuel into satellites that were never designed to be serviced. As such, these satellites (all satellites, really) got buttoned up tightly on the ground, with fueling valves screwed shut, then wired shut, and then covered in a thermal blanket or two. To refuel these satellites, all of this stuff would have to be completely taken apart in a way that it was absolutely not meant to be.

NASA's Robotic Refueling Missions (RRM) began back in 2011, sending a test payload the size of a small refrigerator to the International Space Station. With replicas of satellite fuel valves, actual fuel to transfer, and a suite of tools that could be operated by the station's robotic arm, the RRM missions allowed NASA to establish procedures for practical on-orbit refueling. The most recent mission, RRM3, launched in December of 2018 to test the transfer of cryogenic fuels, which must be kept cold but are potentially more powerful than the hydrazine monopropellants that most satellites use for propulsion. In April of this year, RRM 3 lost its cryogenic cooling capability and the fuel had to be vented into space, but NASA is still be able to test its tools and procedures for the fuel transfer, even without any fuel in the tanks.

Combining both servicing and refueling is Restore-L, which at this point is probably the satellite servicing project to get most excited about. Restore-L is (or will soon be) a robotic spacecraft that will take everything that NASA has learned about spacecraft servicing and refueling and put it to the test with a visit to Landsat 7, a U.S. government-owned remote sensing satellite which has been operating in low Earth orbit since 1999 and will likely run out of fuel by 2021. It's an ambitious mission, but the potential payoff is huge: Landsat 7 cost more than half a billion dollars, and it would be great if we could keep it, and other satellites, fueled up and productive.

The important bits of Restore-L are being developed by NASA at NASA's Goddard Space Flight Center (GSFC) in Maryland, with Maxar contributing the spacecraft bus along with the robotic arm flight hardware. We met with Brent Robertson, NASA’s project manager for Restore-L, in GSFC's cavernous black-walled Robotic Operations Center where the Restore-L hardware and software is being tested. When complete, Restore-L will feature a pair of sizeable robotic arms that can grapple satellites, an assortment of tools, and a pile of sensors that enable both remote control from Earth as well as fully autonomous operation.

The Landsat 7 refueling mission will involve a complex procedure that is typical of what will have to happen when just about any satellite is refueled. Restore-L will have to:

"Landsat 7 was chosen because it's a fairly representative satellite," Robertson says. Like most satellites, it's got a Marman ring, a structural component that connected it to its upper stage rocket, and that now provides a convenient and standardized grappling point for Restore-L's robot arm. There's some variation in fuel valves between satellites, and Restore-L will carry tools specific to Landsat 7, but the general procedure should be more or less the same and tools can be changed out when necessary.

Most importantly, though, Landsat 7 is representative in that it wasn't designed for this, says Robertson. "When Landsat 7 was launched, there were no plans for refueling. Nobody thought that that would be possible. We'll be the first to demonstrate it."

The trickiest part of the mission will likely happen right after Restore-L catches up with Landsat 7, as it initiates the grapple maneuver. It can't be teleoperated, because even a second or two of time delay in communications is too long for such a delicate maneuver—in microgravity, a missed grapple could mean sending both Restore-L and Landsat 7 into a spin, or even damage Landsat 7 somehow. The grapple must be autonomous, and Restore-L will be equipped with visible light cameras, infrared cameras, and a space-based lidar being developed at GSFC to make that happen. And if it doesn't quite happen, the spacecraft must be intelligent enough to back away safely

GSFC has been doing extensive testing on Earth in preparation for this autonomous grapple on orbit. The Robotic Operations Center is home to a full-scale model of Landsat 7’s bottom half mounted on what is essentially a hexapod robot, the legs of which can simulate the kind of six degrees of freedom in motion that Landsat 7 experiences in microgravity.

Restore-L's grappling arm, which has seven degrees of freedom, is long enough to allow the satellite to grab Landsat 7 from about a meter away, and harmonic drives in the arm's joints ensure accuracy with minimal backlash. Force-torque sensors on the gripper will allow Restore-L to autonomously evaluate its grip on its target.

Once Restore-L has a solid hold, there are plenty of options, says Robertson. "We have a lot of capability on Restore-L, and we can do many things with this mission besides just refuel Landsat 7. Cutting things and unscrewing caps and refueling, that's difficult. But the actual capture of a satellite and relocation—we have the capability to do that for a much wider spectrum of satellites."

Part of the issue is that Restore-L might not always have the right tools on hand for fueling. Again, because satellites are not designed to be serviced, there's no particular reason to standardize fueling valves or make them easily accessible. GSFC has developed robot-friendly service valves which would make things a lot easier, and would be overjoyed to license the technology to anyone who wants it, but so far, Robertson tells us, these valves have yet to fly on any satellites. "It's almost like a chicken or the egg thing," says Robertson. "Nobody has done robotic servicing, so until it's demonstrated, operators are reluctant to invest in servicing until they see that it's possible. I think when we actually demonstrate this on Landsat 7, you'll see [the] industry becoming more aware that there's an opportunity here."

After our tour of the Robotic Operations Center, we asked Robertson a few more questions about the future of satellite servicing.

IEEE Spectrum: With the trend toward swarms of smaller, lower cost satellites, what will large satellites continue to offer that will make servicing useful in the long term?

There's more and more computing power that you can fly in space in much smaller things. But some things do still require large apertures, like antennas and mirrors. And there's human exploration as well. If we're going to the moon and Mars, it's going to require robots assembling things. It's not just more economical, it's necessary.

Besides prolonging the life of legacy satellites through refueling, can the technology you're working on create new capabilities that these satellites wouldn't have had otherwise?

Yes. Our prime mission is to refuel Landsat 7, but we have a lot of additional capability. Right now, satellites are restricted by launch vehicle fairing size, and that limits everything from mirror size in telescopes to antenna size in communications satellites. But having a robot in space really lets you get away from that paradigm—you could have multiple launches, and you could demonstrate manufacturing and assembling and building things in space. It's really going to create a new class of mission.

Is that how we should be thinking about Restore-L long term?

That's how I think of it! We're demonstrating a lot. We're going to be the first to do many things, but we're not going to be the last. Nobody really knows exactly what space is going to look like in 30 years, but I'm pretty sure there's going to be a lot more robotics than there is today. These satellites are very expensive—some of them cost over a billion dollars. And if something doesn't deploy, sometimes the mission is just unsuccessful. But if you have robots in space, you have the capability to unstick things, to grab things, to move things. Or potentially as technology develops, new technology can be added to a satellite, thereby giving that satellite new capabilities by launching just a component rather than another satellite.

There are a lot of dead satellites in space, a lot of hardware up there. You can start to think about things like salvaging that hardware with robots. Industry has been considering what can be done with a spent upper stage, for example. You could go grab that upper stage, which has millions of dollars of electronics and could be just fine to use except it doesn't have any fuel. You could salvage that. Or you could grab a couple different things and put them together. 20 or 30 years from now, I wouldn't be surprised if people are grabbing satellites that are no longer in service and repurposing them for other things.

Restore-L is currently scheduled to launch no earlier than December of 2022, pending the usual things like passing design reviews and continued funding. Assuming the service call to Landsat 7 is successful, the extra 115 kg of hydrazine fuel that Restore-L will transfer to the satellite is enough fill Landsat 7's tank, potentially extending its mission by several years. Meanwhile, Restore-L will remain in orbit, where it could help NASA test new orbital servicing or construction techniques.