A Russian commander, his NASA co-pilot and a first-time flier from the United Arab Emirates undocked from the International Space Station early Thursday, setting their ship up for a fiery plunge back to Earth and a landing on the steppe of Kazakhstan. 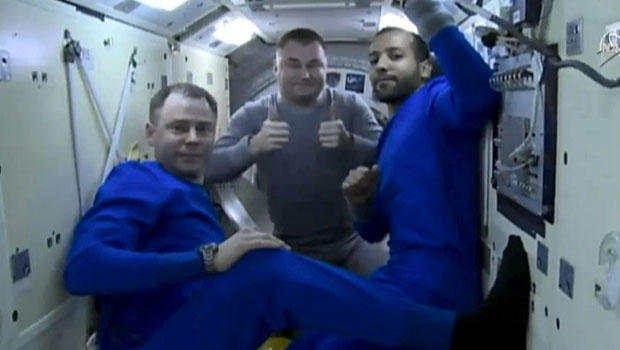 Strapped into the spacecraft's central crew module were vehicle commander Alexey Ovchinin, NASA flight engineer Nick Hague and "spaceflight participant" Hazzaa Ali Almansoori. Ovchinin and Hague, launched to the station on March 14, were closing out a 203-day mission while Almansoori, a guest cosmonaut who arrived at the outpost Sept. 25, was wrapping up a relatively short eight-day visit.

After moving the Soyuz a safe distance away from the station, Ovchinin and Hague planned to monitor a four-minute 42-second rocket firing starting at 6:06 a.m. The braking burn was designed to slow the ship by about 286 mph, just enough to drop the far side of the orbit deep into the atmosphere for a landing in Kazakhstan.

The flight plan called for the three modules making up the Soyuz MS-12/58S spacecraft to separate just before atmospheric entry. The crew module, the only one equipped with a protective heat shield, then was expected to plunge back to a parachute and rocket-assisted landing near the town of Dzhezkazgan a few seconds before 7 a.m. (5 p.m. local time).

Russian recovery teams, NASA personnel and UAE officials were stationed nearby, ready to help the returning station fliers out of the cramped descent module as they begin the process of readjusting to Earth's gravity. Ideal weather was expected, with clear skies and comfortable temperatures around 62 degrees.

After brief medical checks and satellite phone calls home to friends and family, Ovchinin and Almansoori planned to head back to Star City near Moscow while Hague was to board a NASA jet in Karaganda for the long flight back to the Johnson Space Center in Houston.

Left behind in orbit aboard the space station was the six-member Expedition 61 crew, made up of Italian commander Luca Parmitano, cosmonauts Alexander Skvortsov and Oleg Skripochka and NASA astronauts Christina Koch, Drew Morgan and Jessica Meir.

They face one of the busiest schedules in recent memory with up to a dozen spacewalks planned by the end of the year -- five to install fresh batteries in the station's solar power system, five and possibly six to repair a $2 billion particle physics experiment and one to carry out maintenance on the Russian segment of the lab complex.

The first battery swap-out spacewalk, with Koch and Morgan, is planned for Sunday.

The station crew may also welcome a U.S. commercial crew ship to the station at some point during their stay. Boeing and SpaceX are in the final stages of readying ferry craft for launch that NASA is counting on to end the agency's sole reliance on the Russian Soyuz to carry astronauts to and from the station.

But both companies have had major problems and it's not clear when either will be ready for operational flights. As it now stands, the final NASA-booked seat aboard a Soyuz will be used on the next Russian crew fight to the station in April. NASA managers are reportedly considering the purchase of additional seats -- at more than $80 million each - to ensure an uninterrupted U.S. presence aboard the station.

For Hague and Ovchinin, Thursday's return to Earth closed out an extraordinary year that began with an initial attempt to reach the space station last October. Two minutes after launch, their normally reliable Soyuz booster malfunctioned and broke apart, triggering a dramatic -- but safe -- emergency abort.

Russian engineers quickly found and corrected the problem and Roscosmos, the Russian space agency, resumed Soyuz flights two months later. Hague and Ovchinin then were reassigned to the Soyuz MS-12/58S spacecraft and, joined by Koch, they finally made it into orbit on March 14.

"This year has definitely been a crazy year," Hague told CBS News in a space-to-ground interview Wednesday. "Finally making it up here in March was just ... a mix of emotions -- the relief of finally accomplishing it, knowing the sacrifice that had been put in up to that point, not just by me, but my family.

"It's something uncommon to ask a family to sit there and witness a rocket disintegrate with someone they love strapped to the top of it and then to turn around and ask them to do that again five months later. That's quite something for them to go through. It's really brought home just how important it is what we're doing up here, and why it's all worth it."

He said his time in orbit was a more moving experience than he expected.

"I didn't fully appreciate just how significant that change is, to be able to look down and see the Earth for what it is, this one giant organism that is alive and it's constantly changing and we're part of that," he reflected. "And to just understand that we're part of this precious place."

Describing Earth as "this precious island in this abyss of darkness around us," Hague said the experience made him realize "I'm part of something larger than myself, I'm part of planet Earth."

"It also brings home a sense of stewardship in terms of this is our planet, and we need to do everything we can to make sure we preserve that for future generations. The change in perspective up here is profound, and you can definitely feel it."

Asked if he was looking forward to the trip back to Houston, he said "I'm sure definitely ready to give my wife and kids a huge hug." 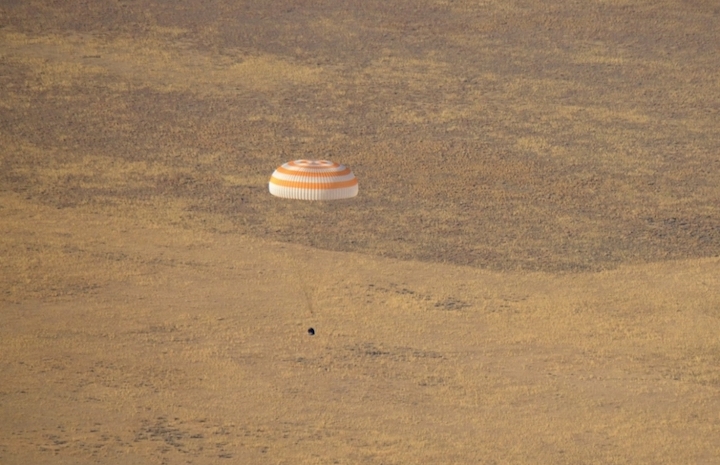 Following a brief period as a nine-member crew onboard the International Space Station (ISS), three of its orbital outpost explorers returned home in the early hours of Thursday. Riding onboard Soyuz MS-12 was Alexey Ovchinin and Nick Hague, joined by short-stay spaceflight participant Hazzaa Ali Almansoori.

Hague completed his second flight in space totaling 203 days, while Ovchinin logged 375 days in space on his third flight at the time of landing. 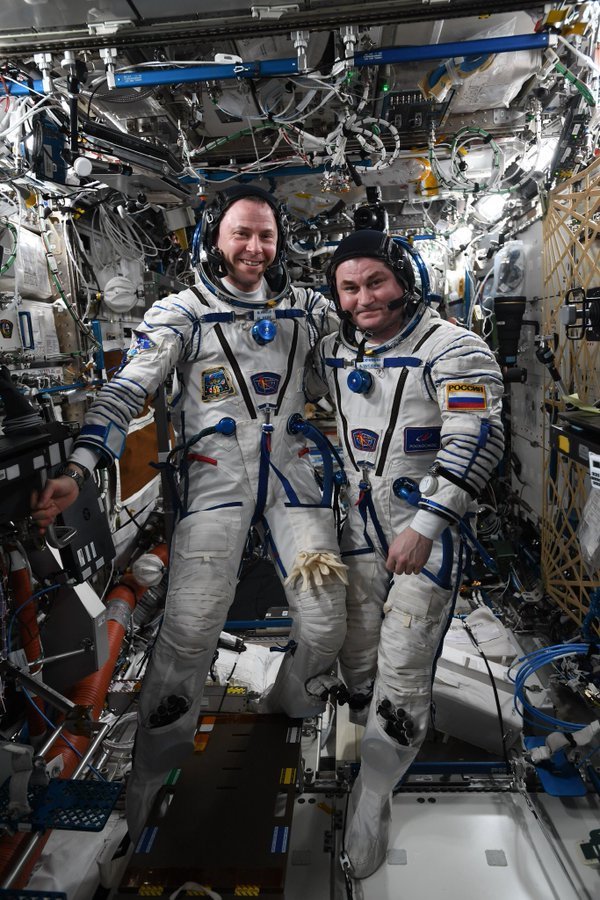 However, this was the first actual trip to the ISS for Hague, after he and Ovchinin first flew together on an abbreviated mission in October 2018, cut short by one of the four boosters failing to separate properly and striking the vehicle triggering an ascent abort minutes after launch. Both landed safely during the abort and were quickly reassigned to the mission they are now completing.

The first order of business was the space station change of command ceremony, during which Ovchinin handed over command to ESA (European Space Agency) astronaut Luca Parmitano.

Following a farewell and Soyuz hatch closure, the crew then strapped themselves into their seats and conducted leak checks before the undocking procedures.

They are being transported home under the command of Ovchinin, who is commanding Soyuz MS-15 for its End Of Mission events.

Undocking occurred at 3:36 am Eastern time.

Following undocking, Soyuz enjoyed a few hours of free flight as it departed from the Station’s neighborhood via two separation burns while the onboard crew prepared for the final aspect of their mission.

All the departure events were nominal as the two crews bid farewell to each other over the communication loops.

he deorbit burn occurred at 6:06 am Eastern, reducing the Soyuz’s velocity just enough for it to begin the plunge back to Earth via a 4 min, 40 second retrograde firing.

The Soyuz then entered the critical part of its mission as the spacecraft has no other option but to re-enter.

The first milestone was module separation as the three major elements of the Soyuz spacecraft – the OM, DM and Instrumentation/Propulsion Module (IPM) – are pushed apart via the use of pyrotechnics. 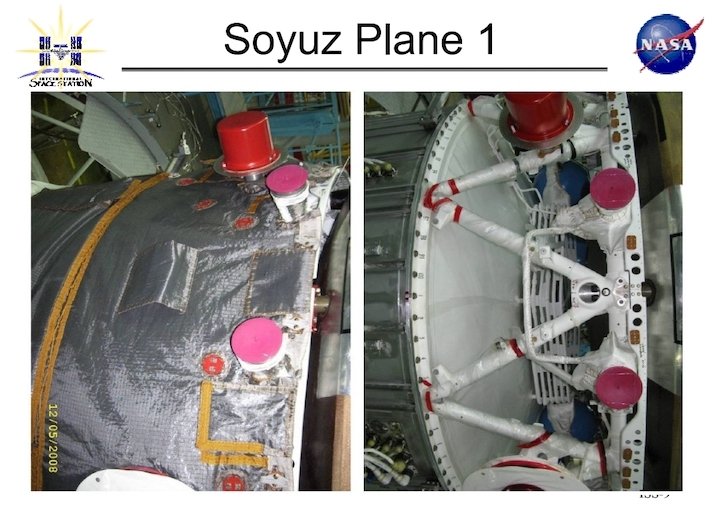 All three modules nominally separate simultaneously – shortly after the deorbit burn is completed – at around 140 km altitude.

Two “off-nominal” re-entries occurred in 2007 and 2008 and were the cause of separation failures on the modules, thus initiating a very stressful return for their three-person crews.

Known as “ballistic entry” – the crew has to endure much higher G-forces and land at an alternative site. 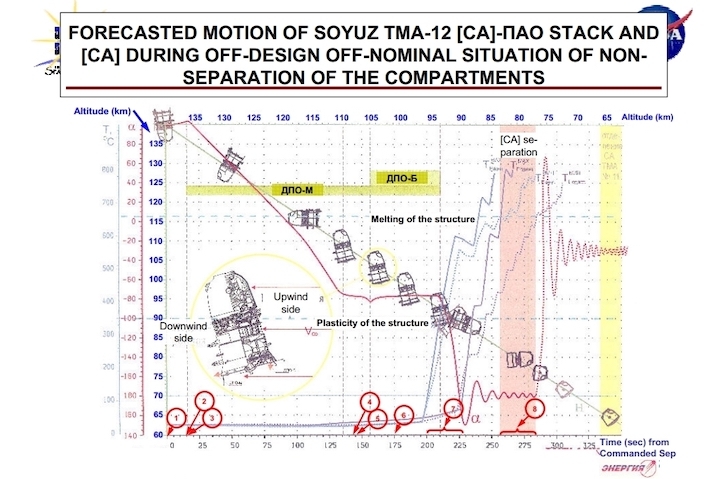 Mitigation against this issue has resulted in no further issues with the module separation milestone in any of the following missions.

This is one of the hardest parts of the return for the crew, which has been described as being inside a washing machine by some returning astronauts.

The Soyuz craft then completes the return to terra firma, landing on the steppes of Kazakhstan, which is scheduled for 7 am Eastern. 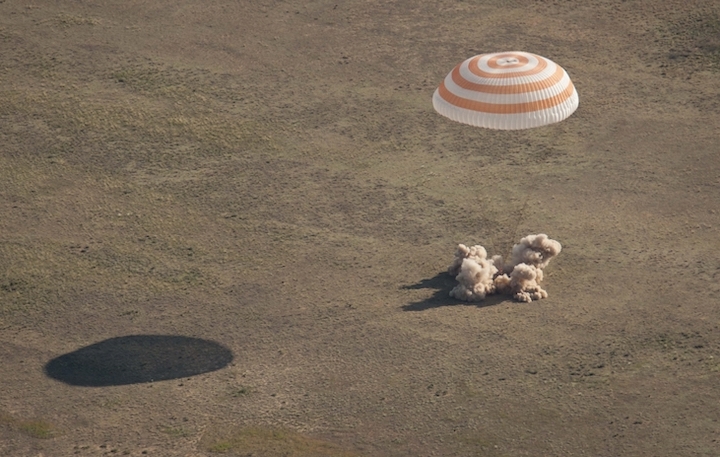 The exact timing of touchdown, under a “soft” thruster engine firing, is always dependent on several factors – such as the impact of winds on the Soyuz chutes – and can vary by several minutes.

With the Soyuz safely back on Earth, ground and aircrews converge on the Soyuz to extract the crew from the SA.

The crew will undergo immediate and preliminary health checks once outside their Soyuz spacecraft. All three will then transferred to a medical tent and then prepared for transit away from the landing site.

After landing, the crew will return by helicopter to the recovery staging area in Karaganda, Kazakhstan. Hague will board a NASA plane for the return to Houston, and Ovchinin and Almansoori will return to their training base in Star City, Russia.