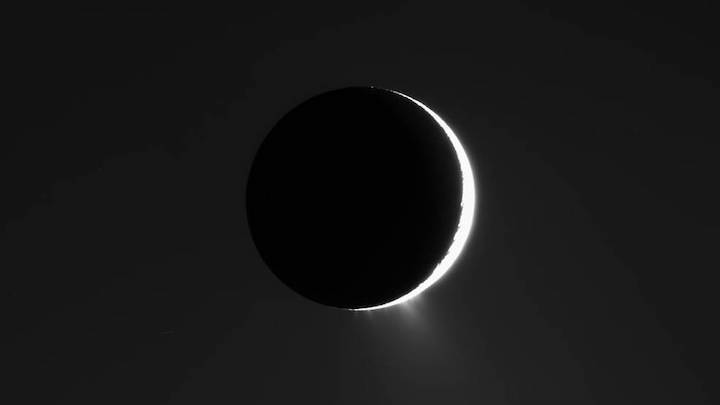 In this image captured by NASA's Cassini spacecraft in 2007, the plumes of Enceladus are clearly visible. The moon is nearly in front of the Sun from Cassini's viewpoint.

New kinds of organic compounds, the ingredients of amino acids, have been detected in the plumes bursting from Saturn's moon Enceladus. The findings are the result of the ongoing deep dive into data from NASA's Cassini mission.

Powerful hydrothermal vents eject material from Enceladus' core, which mixes with water from the moon's massive subsurface ocean before it is released into space as water vapor and ice grains. The newly discovered molecules, condensed onto the ice grains, were determined to be nitrogen- and oxygen-bearing compounds. 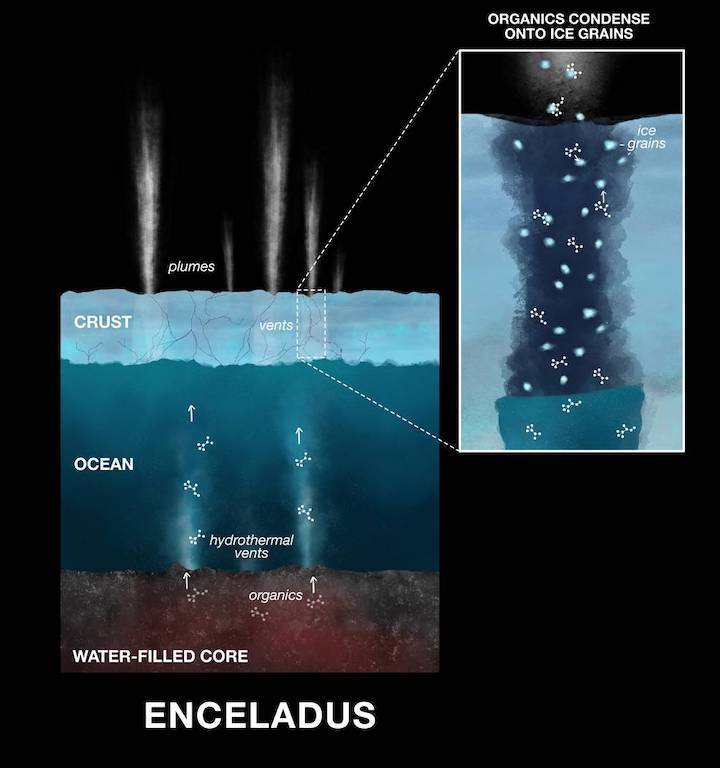 This illustration shows the process of organic compounds making their way onto ice grains emitted in plumes from Saturn's moon Enceladus, where they were detected by NASA's Cassini spacecraft.
Credits: NASA/JPL-Caltech

"If the conditions are right, these molecules coming from the deep ocean of Enceladus could be on the same reaction pathway as we see here on Earth. We don't yet know if amino acids are needed for life beyond Earth, but finding the molecules that form amino acids is an important piece of the puzzle," said Nozair Khawaja, who led the research team of the Free University of Berlin. His findings were published Oct. 2 in the Monthly Notices of the Royal Astronomical Society.

Although the Cassini mission ended in September 2017, the data it provided will be mined for decades. Khawaja's team used data from the spacecraft's Cosmic Dust Analyzer, or CDA, which detected ice grains emitted from Enceladus into Saturn's E ring.

The scientists used the CDA's mass spectrometer measurements to determine the composition of organic material in the grains.

The identified organics first dissolved in the ocean of Enceladus, then evaporated from the water surface before condensing and freezing onto ice grains inside the fractures in the moon's crust, scientists found. Blown into space with the rising plume emitted through those fractures, the ice grains were then analyzed by Cassini's CDA.

The new findings complement the team's discovery last year of large, insoluble complex organic molecules believed to float on the surface of Enceladus' ocean. The team went deeper with this recent work to find the ingredients, dissolved in the ocean, that are needed for the hydrothermal processes that would spur amino acid formation.

"This work shows that Enceladus' ocean has reactive building blocks in abundance, and it's another green light in the investigation of the habitability of Enceladus," added co-author Frank Postberg.

The Cassini-Huygens mission is a cooperative project of NASA, the European Space Agency (ESA) and the Italian Space Agency. NASA's Jet Propulsion Laboratory, a division of Caltech in Pasadena, California, manages the mission for NASA's Science Mission Directorate, Washington. JPL designed, developed and assembled the Cassini orbiter. The radar instrument was built by JPL and the Italian Space Agency, working with team members from the U.S. and several European countries.