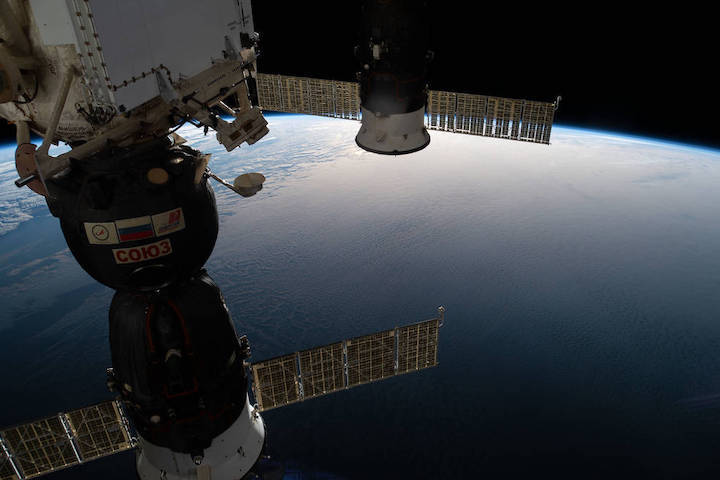 Two docked Russian spaceships, including the Soyuz MS-12 crew craft and the Progress 72 space freighter, are highlighted in this image as the International Space Station was about to cross South America 263 miles above the Atlantic Ocean.
Credits: NASA

Live coverage of their return will begin at 11:45 p.m. EDT Wednesday, Oct. 2, on NASA Television and the agency’s website.

Hague, Expedition 60 and Soyuz commander Alexey Ovchinin of the Russian space agency Roscosmos, and spaceflight participant Hazzaa Ali Almansoori of the United Arab Emirates, will close the hatch to their Soyuz MS-12 spacecraft Oct. 3 and undock from the station. A little more than three hours later, a parachute-assisted landing is planned southeast of the remote town of Dzhezkazgan on the Kazakhstan steppe.

Hague and Ovchinin are completing a 203-day mission, spanning 3,248 orbits of Earth, and a journey of 80.8 million miles. Hague is completing his second flight in space totaling 203 days, while Ovchinin will have logged 375 days in space on his third flight at the time of landing. Hague and Ovchinin flew together on an abbreviated mission in October 2018, cut short by a technical problem that triggered an ascent abort minutes after launch. Almansoori is wrapping up an eight-day stay on the station that covered 128 orbits of Earth and 3.1 million miles.

After landing, the crew will return by helicopter to the recovery staging area in Karaganda, Kazakhstan, where Hague will board a NASA plane for return to Houston, and Ovchinin and Almansoori will return to their training base in Star City, Russia.

At the time of undocking, Expedition 61 will begin aboard the station, with Parmitano, NASA astronauts Christina Koch, Jessica Meir and Andrew Morgan, and Russian cosmonauts Alexander Skvortsov and Oleg Skripochka comprising a six-person crew on the orbital outpost.