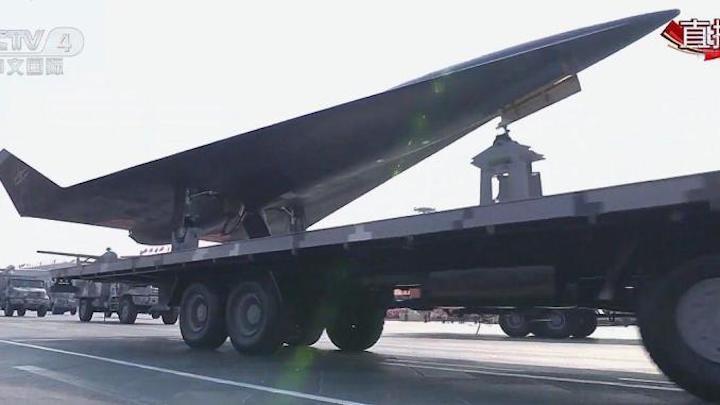 A view of the new WZ-8 drone. (Image credit: CCTV/CNN)

It was the largest in China’s recent history, with around 15,000 military personnel, 160 aircraft, 580 pieces of military hardware and equipment, and 59 formations in total.

Several interesting pieces of hardware were unveiled during the parade, including the DF-17 hypersonic ballistic missiles, the Sharp Sword UCAV (designated GJ-11) and the Dongfeng-41 (DF-41) intercontinental ballistic missile. However, the most mysterious weapon system to roll past President Xi Jinping was a pair of pointy, supersonic UAV (unmanned aerial vehicle) that someone identified as the DR-8 or Wuzhen 8 (WZ-8) spy drones but were simply called “High Altitude and High Speed Reconnaissance Drone” in Chinese TV.

The fact that a recce drone was to be unveiled was not a secret. The shape of high-speed, high-flying drone had already attracted the interest of Western military analysts when it made its appearance during the military parade rehearsal in Beijing on Sept. 14. At that time, the aircraft was covered by protective tarp that didn’t make any real analysis possible.

The two that appeared during the parade seem to be powered by two engines and are equipped with a seemingly robust, retractable landing gear. 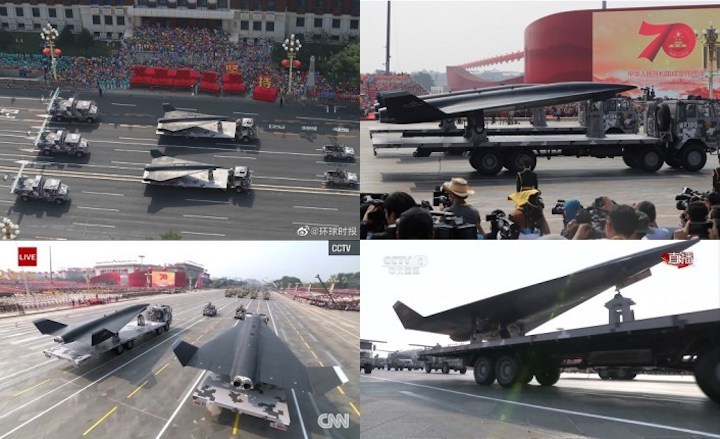 For sure there’s a loose resemblance to the Lockheed D-21. The Chinese drone features a similar delta-shaped wing but lacks the vertical stabilizer mounted centrally on the fuselage, replaced by stabilizers mounted on two big winglets. The combination of this aerodynamic configuration and the presence of two attachment points on the fuselage should hint that the drone is meant to be air-launched (as the D-21).

Someone speculated the spy drone was designed to be air launched from an H-6N and would also have identified the attach points: 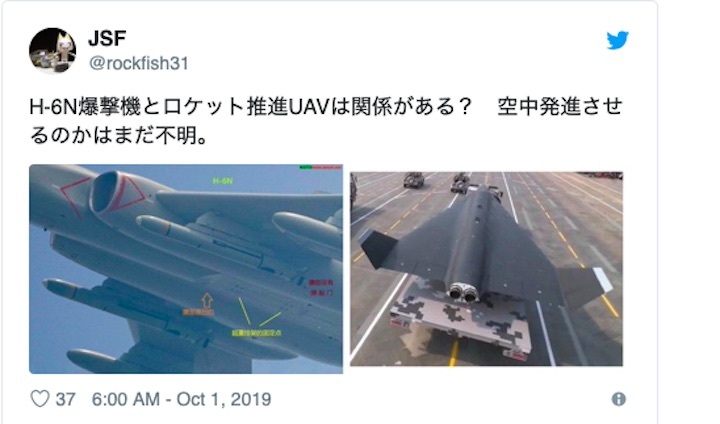 The Chinese military didn’t disclose information about the engines.

The drone was rumored to be powered by a turbine-based combined cycle engine (TBCC), which uses a conventional turbojet for relatively low-speed flight and transitions to a ramjet/scramjet to accelerate to its maximums speed, but it’s worth highlighing that the WZ-8 lacks any sort of air inlets, meaning that the two engines are not air-breathing. Our own writer Stefano D’Urso also noticed that the nozzles appear similar to the ones found on liquid rocket engines and hybrid rocket engines. 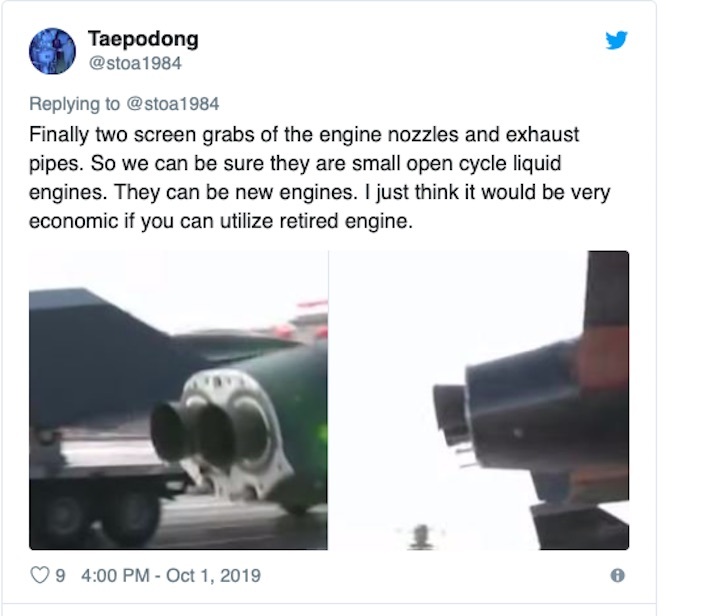 The drone appears to be designed for high-altitude reconnaissance at supersonic speeds, with a maximum speed rumored to be between Mach 4 and Mach 5. It is not clear yet whether the drone was developed to be stealth, but the design seems indeed optimized for low observability.

For sure, it is not completely new: its existence was exposed by satellite imagery last year and a first flight reported in 2015. 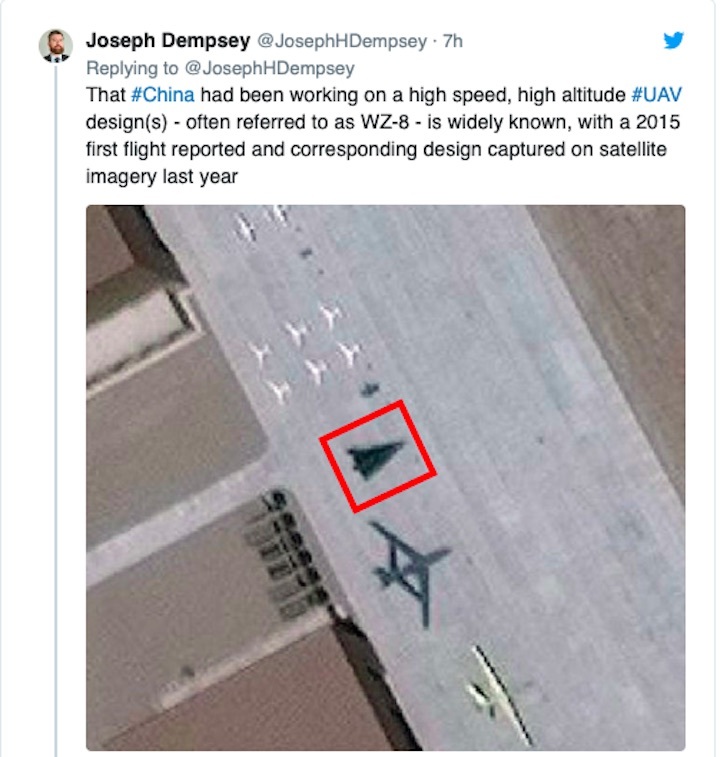 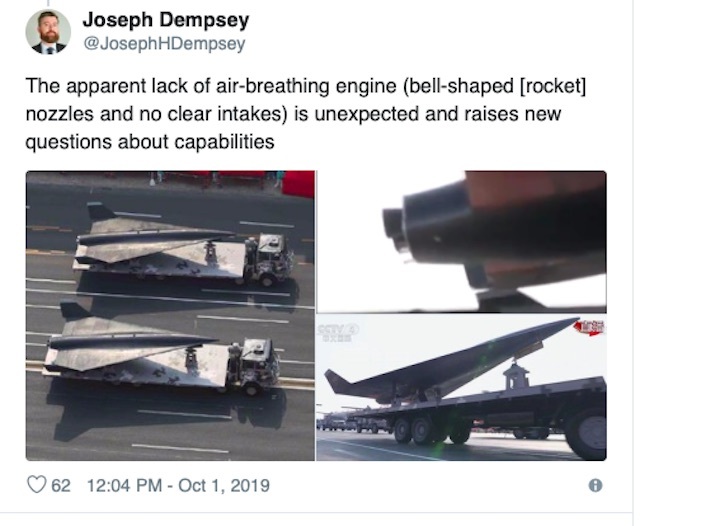 As already explained the aircraft seems to have something in common with the D-21, a drone whose flight plan was programmed into a guidance system.

In the beginning, the drone was launched from a Lockheed M-21, a specialized variant of the SR-71 Blackbird acting as mothership launch aircraft. The M-21 version of the SR-71 carried the D-21 drone on its back up to launch speed and altitude. Then it ignited the D-21’s unique RJ43-MA20S-4 ramjet engine and released it on its pre-programmed flight.

The idea was that, after conducting its intended spy mission, the drone would eject a hatch with photo equipment to be recovered either mid-air (by a JC-130B, as it was lowered by a parachute) or after the hatch landed. 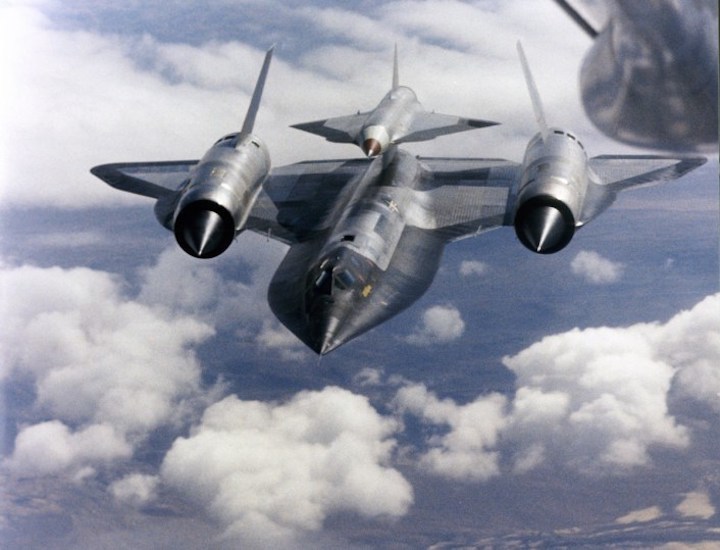 “On the fourth flight test, the D-21 experienced an “asymmetric unstart” as it passed through the bow wake of the M-21 causing the mothership to pitch up and collide with the D-21 at Mach 3.25. Crewmembers Bill Park and Ray Torick ejected from the M-21, but Torick’s flight suit became ripped and filled with water when he plunged into the ocean where he drowned,” an official report recalls.

A video of the incident, filmed by an accompanying Blackbird can be found here.

After the accident, the M-21 launch program was cancelled and Lockheed Martin decided to launch the drone from B-52Hs (including #0036). The new code name for the D-21 project became Senior Bowl.

“After several failed launch attempts, the first successful D-21 launch from a B-52 occurred June 16, 1968. The drone flew 3,000 miles at 90,000 feet. After a few more flight tests, the CIA and the Air Force decided to conduct four operational launches that all ended in failure in some way. Two flights were successful, however the imagery could not be recovered from the D-21’s hatch. The other two operational flights ended with one being lost in a heavily defended area and the other D-21 simply disappeared after launch,” official documentation says.

“Some will comment that the aircraft in question looks like a Lockheed D-21 drone,” said Tyler Rogoway commenting the sighting of the drone under cover during the rehearsals. “That is somewhat true and it is also a fact that China was able to recover the wreckage of the last operational D-21 flight that was lost over the country nearly five decades ago. Whatever information they could glean from that wreckage likely influenced not just this aircraft’s design, but pretty much all of the country’s indigenous high-performance aircraft programs that came after it. So it is unlikely to be any sort of a copy, although the D-21’s influence may be present.”

In fact, the fourth, and last, operational flight of a D-21B was on Mar. 20, 1971. The drone was lost on the final segment of the route over China’s Yunnan province. It crashed in forest area and the wreckage was found by local authorities. In 2010, after being in the junkyard of the China Aviation Museum for years, the wreckage was moved to the exhibition area. I can’t but agree with Tyler that the Chinese have surely carefully studied the recovered parts of the D-21 explaining why we can find “traces” of the Lockheed drone in the shape (and operating model) of the new WZ-8 drone.