Why our universe is swirling with more matter than its bizarre counterpart antimatter is one of the most perplexing puzzles of modern physics. 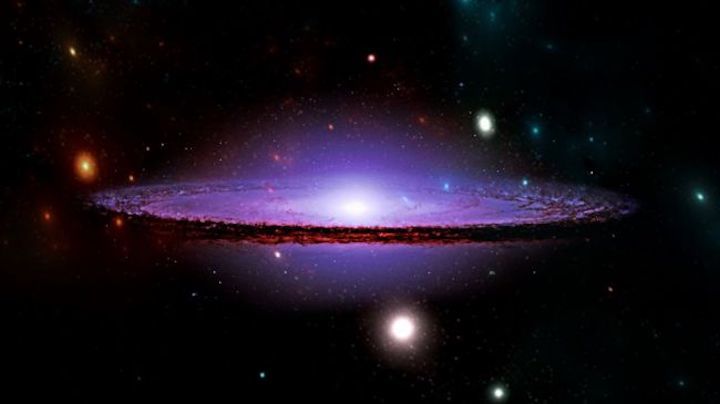 Why our universe is swirling with more matter than its bizarre counterpart antimatter — and why we exist at all — is one of the most perplexing puzzles of modern physics.

Somehow, when the universe was incredibly young, almost all the antimatter disappeared, leaving just the normal stuff. Theorists have long stalked the ever-elusive explanation — and more important, a way to test that explanation with experiments.

Now, a trio of theorists has proposed that a trio of particles called Higgs bosons could be responsible for the mysterious vanishing act of antimatter in the universe. And they think they know how to find the suspected culprits.

The case of the missing antimatter

In almost every single interaction between subatomic particles, antimatter (which is identical to normal matter but with opposite charge) and normal matter are produced in equal measure. It appears to be a fundamental symmetry of the universe. And yet, when we go out and look at that same universe, we see hardly any antimatter at all. As far as physicists can tell, for every particle of antimatter still hanging around, there are about a billion particles of normal matter, all across the cosmos.

This mystery goes by many names, such as the matter asymmetry problem and the baryon asymmetry problem; regardless of name, it has physicists stumped. As of now, nobody has been able to provide a coherent, consistent explanation for the dominance of matter over antimatter, and since it's the job of physicists to explain how nature works, it's starting to get irritating.

However, nature did leave some clues lying around for us to puzzle over. For instance, no evidence for lots of antimatter shows up in the so-called cosmic microwave background — heat left over from the Big Bang, the birth of the universe. That suggests the caper occurred in the very early universe. And the early universe was a pretty crazy place, with all sorts of complicated, poorly understood physics going on. So if matter and antimatter are going to split, that's a good time to do it.

In fact, the best time for antimatter to disappear is during the brief but tumultuous epoch in our universe when the forces of nature were splitting apart as the cosmos cooled.

At high energies (like those inside a particle collider), the electromagnetic forceand the weak nuclear force combine their powers to form a new force: electroweak. Once things cool off and return to normal everyday energies, however, the electroweak splits into the familiar two forces.

At even higher energies, like the ones found in the first moments of the Big Bang, we think that the strong nuclear force merges with the electroweak, and at still higher energies, gravity joins the party into a single unified force. But we haven't quite figured out how gravity gets in on the game yet.

The Higgs boson, proposed to exist in the 1960s but not discovered until 2012 inside the Large Hadron Collider, does the work of splitting the electromagnetic force from the weak nuclear force. Physicists are pretty certain that the matter-antimatter split happened before all four forces of nature fell into place as their own entities; that’s because we have a pretty clear understanding of the physics of the universe post-split, and adding too much antimatter in later epochs violates observations of the cosmic microwave background).

As such, perhaps the Higgs boson plays a role.

But the Higgs by itself can't cut it; there's no known mechanism using just the Higgs to cause an imbalance between matter and antimatter.

Thankfully, the story of the Higgs may not be over. Physicists have found a single Higgs boson in collider experiments, with a mass of around 125 billion electron volts, or GeV — for reference, a proton weighs around 1 GeV.

Turns out, the Higgs may not be alone.

It's entirely possible for there to be more Higgs bosons floating around that are more massive than what we can currently detect in our experiments. Nowadays, those heftier Higgs, if they exist, wouldn't do much, not really participating in any physics that we can access with our colliders — We just don't have enough energy to "activate" them. But in the early days of the universe, when energies were much, much higher, the other Higgs could have been activated, and those Higgs may have caused an imbalance in certain fundamental particle interactions, leading to the modern asymmetry between matter and antimatter.

And so most of that stream of matter would annihilate the antimatter, swamping it almost entirely out of existence in a flood of radiation. In this scenario, there would be enough normal matter left to lead to the present-day universe that we know and love.

To make this work, the theorists propose the trio includes the one known Higgs particle and two newbies, with each of this duo having a mass of around 1,000 GeV. This number is purely arbitrary, but was specifically chosen to make this hypothetical Higgs potentially discoverable with the next generation of particle colliders. There's no use predicting the existence of a particle that can never be detected.

The physicists then have a challenge. Whatever mechanism causes the asymmetry has to give matter an edge over antimatter by a factor of a billion to one. And, it has a very short window of time in the early universe to do its thing; once the forces split, the game is over and physics as we know it is locked in place. And this mechanism, including the two new Higgs, must be testable.

The short answer: They were able to do it. It's understandably a very complicated process, but the overarching (and theoretical) story goes like this: The two new Higgs decay into showers of particles at slightly different rates and with slightly different preferences for matter over antimatter. These differences build up over time, and when the electroweak force splits up, there's enough of a difference in matter-antimatter particle populations "built in" to the universe that normal matter ends up dominating over antimatter.

Sure, this solves the baryon asymmetry problem but just immediately leads to the question of what nature is doing with so many Higgs bosons. But we'll take things one step at a time.