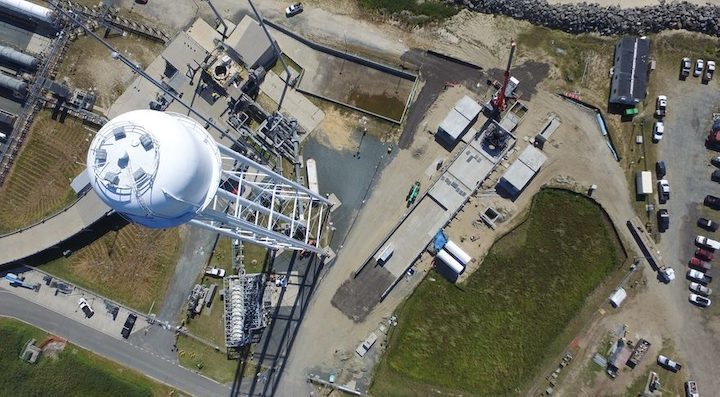 WASHINGTON — Rocket Lab is nearing completion of its second launch site, and first in the United States, which the company says should be ready for its first Electron launch in early 2020.

The company announced Sept. 18 it had achieved a milestone in the construction of Launch Complex (LC) 2 at the Mid-Atlantic Regional Spaceport on Wallops Island, Virginia, with the installation of the launch platform that will be used for Electron launches from the site.

With the launch platform in place, crews are now turning to installing the final systems for the site, including the strongback that supports the rocket, as well as wiring and plumbing. “By the end of this year we’ll have that pad fully activated and certified for flight,” Peter Beck, chief executive of Rocket Lab, said in a Sept. 19 interview. “We’ll be ready for the first flight early next year.”

The launch site is similar in design to the company’s existing Launch Complex 1 in New Zealand, which had supported all of its Electron flights to date. The design of LC-2 is slightly different, he said, so that the company can do static fire tests of Electron stages on the pad itself rather than on separate test stands.

Beck said that, in addition to the pad itself, the launch complex includes an integration facility that can accommodate four rockets at one time, as well as two clean rooms for payloads and offices. The facility is designed in general to support responsive launch. “We can have a vehicle stored in Wallops and rolled out to the pad in a number of hours,” he said.

LC-2 is intended for customers, principally U.S. government agencies, that want to launch their spacecraft from within the country. It also provides additional launch opportunities when combined with the existing LC-1 in New Zealand.

“Between New Zealand and Wallops, we have some 130-odd launch opportunities,” Beck said. “Have two launch pads in two different countries is very advantageous and gives us a lot of flexibility.”

Rocket Lab hasn’t yet needed that ability to support high flight rates. The company carried out its fourth Electron launch of the year Aug. 19, placing four satellites into orbit. The company has announced neither the date nor customers for its next mission. Beck said one customer for that launch requested more time to work on their payload, pushing back the launch.

Despite those delays, Beck said he still expected the company’s launch rate to increase in the coming months. “Through the rest of the year we’re going to have a pretty busy time,” he said. “Near the end of the year we’re aiming to demonstrate two flights in two weeks.”

The August launch was also the first since the company announced its plans to attempt to recover and reuse the Electron’s first stage, part of efforts to increase launch rates without having to scale up manufacturing of the rocket. That launch carried a data recording system to collect data as the first stage descended.

“We got some good data, and the flight team is working through the data,” Beck said. The company is still planning a “block upgrade” to the Electron on its tenth flight in support of those efforts. “The core upgrade is for reusability.”