Mercury’s ancient magnetic poles were far from the location of its poles today, implying its magnetic field, like Earth’s, changed over time, a new study says.

Mercury is the other body in the Solar System besides Earth with a confirmed molten core able to generate a magnetic field. 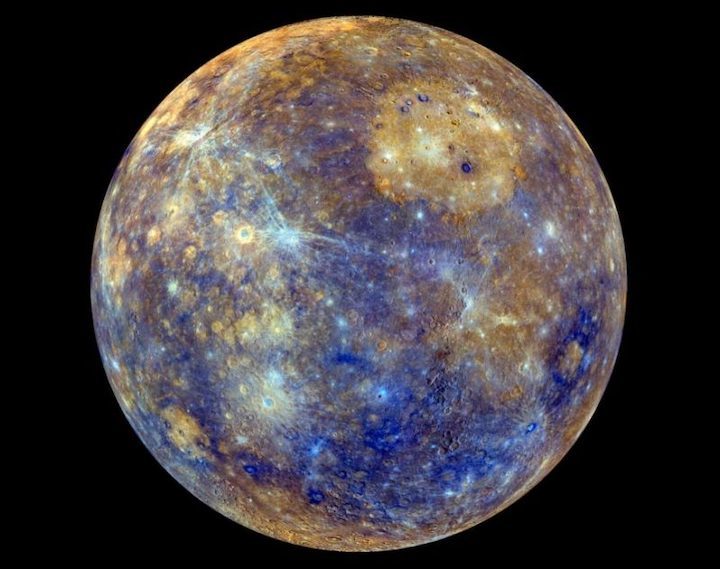 Scientists know Mercury evolved over time but cannot definitively say how it did, said Joana S. Oliveira, an astrophysicist at the European Space Agency’s European Space Research and Technology Centre in Noordwijk, the Netherlands, and lead author of the study.

Earth and the Moon are the only case studies scientists have for changes in planetary bodies’ magnetic poles, because there are no rock samples from other planets.

“If we want to find clues from the past, doing a kind of archaeology of the magnetic field, then the rocks need to be thermoremanent magnetized,” Oliveira said. 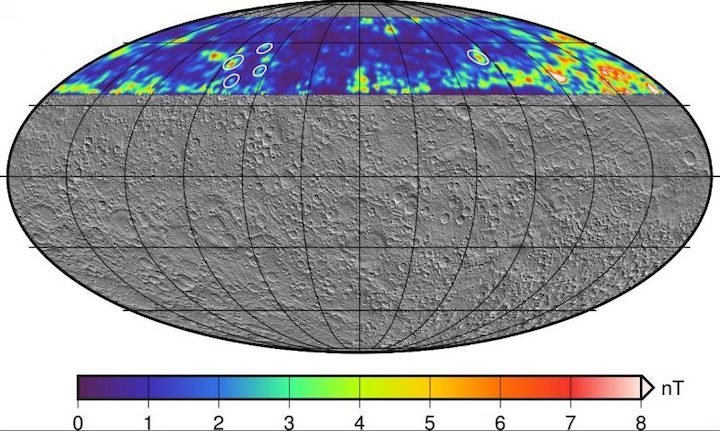 MESSENGER’s descent trajectory across the surface of Mercury, with crater locations circled in white. Credit: AGU

Using planetary archaeology to uncover Mercury’s magnetic history
Past research studied Mercury’s present-day magnetic field, but there was no way to study the crustal magnetic field without low-altitude observations. Then in 2015, the spacecraft MESSENGER began its descent into Mercury’s surface. It collected three months of low-altitude information about Mercury during its descent. Some of that information revealed details about Mercury’s crustal magnetization. The new study examined these different crustal regions to extrapolate Mercury’s ancient core magnetic structure.

“There are several evolution models of the planet, but no one has used the crustal magnetic field to obtain the planet’s evolution,” Oliveira said.

MESSENGER’s low-altitude data from its descent path detected ancient craters with different magnetic signatures than most of the terrain MESSENGER observed. The researchers believed the craters, which were formed roughly 4.1 to 3.8 billion years ago, might hold clues about Mercury’s paleopoles.

Craters are more likely to have thermoremanent magnetized rocks. During their formation, the energy from an impact causes the ground to become molten, giving magnetic material a chance to realign with the planet’s current magnetic field. As that material solidifies, it preserves the direction and position of the planet’s magnetic field like a snapshot in time.

Oliveira and her colleagues used spacecraft observations from five craters with magnetic irregularities. They suspected those craters were formed during a time with a different magnetic field orientation than that of today. They modeled Mercury’s ancient magnetic field based on the crater data to estimate the potential locations for Mercury’s paleopoles. The area MESSENGER passed over and recorded during its demise was limited, so scientists could only use inflight measurements from part of the Northern Hemisphere.

Paleopole surprises
The researchers found Mercury’s ancient magnetic poles were far from the planet’s current geographic South Pole and could have changed throughout time, which was unexpected. They expected the poles to be clustering at two points closer to Mercury’s rotational axis at the geographic north and south of the planet. However, the poles were randomly distributed and were all found in the Southern Hemisphere.

The paleopoles do not align with Mercury’s current magnetic North pole or geographic South, indicating the planet’s dipolar magnetic field has moved. The results reinforce the theory that Mercury’s magnetic evolution was very unlike Earth’s or even other planets in the Solar System. They also suggest the planet may have shifted along its axis, in an event called a true polar wander where the geographic locations of the North and South Poles change.

Earth has a dipolar field with two poles, but Mercury has a dipolar-quadrupolar one with two poles and a shift in the magnetic equator. Its ancient magnetic field could have looked like either of these, or even been multipolar with “field lines like spaghetti,” according to Oliveira. There is no way to tell without multiple physical rock samples from Mercury, she said.