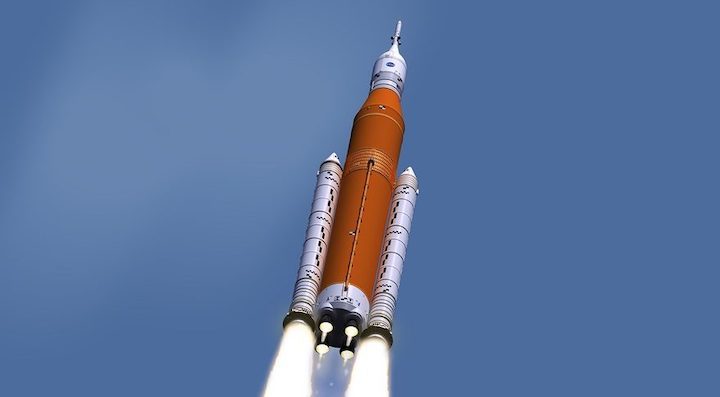 As we celebrate 50 years since Apollo, we should learn from its lessons.

Apollo required three developments — the Saturn V rocket, Apollo capsule, and Lunar lander — launched on a single rocket. Those NASA pioneers were driven by urgency to achieve a lunar landing with simplicity in the number of developments (three), launches (one), and mission critical operations (seven).

Similar to Apollo, NASA is nearing completion on development of the first two key Artemis elements: the Space Launch System (SLS) rocket and the crewed Orion capsule. The missing piece is a Lunar Lander. Rather than draw on the successful Apollo model, NASA is being directed to deviate as a result of three arbitrary constraints.

The Orion Service Module has 35 percent less fuel and can’t maneuver to the low lunar orbit used for Apollo. To compensate, NASA selected an orbit which is further away from the moon as the staging point for lunar lander operations. This, in turn, created a new additional requirement to develop a transfer element to take the lander from this higher orbit down to low lunar orbit.

Apparently, under pressure from commercial launch providers who need additional launches to fill their manifests, NASA is being directed to break the lunar lander into multiple pieces so these can fit on less powerful commercial launchers increasing risk and constraining the architecture.

In addition, the limited performance capability drives the need to develop a refueling system earlier than planned. Of these proposed commercial launchers, only Falcon Heavy exists today, and even it has not demonstrated the necessary 15 metric tons (MT) lift performance to lunar transfer orbit. All other commercial launch vehicles are in development with unverified performance and schedules that are highly dependent on the United States Air Forces Launch Service Agreement award, a government contract that funds development of rockets to launch government satellites.

NASA should consider a few suggestions to enable speed and simplicity for the Human Lander program.

NASA is currently using a SLS Block 1 to launch Orion. NASA can produce a SLS Block 1B, which uses a more powerful upper stage capable of lifting 50 percent more payload to the moon, for 2024. NASA should launch the lander elements (ascent and descent/transfer) on a SLS Block 1B. If an independent transfer element is required, it can be launched on a commercial launcher.

By reducing the number elements requiring on-orbit docking, the Minimal Gateway is not required. NASA can add the Gateway with a Habitation Module in the future to extend mission duration and enable a sustainable lunar program and support Mars missions.

This approach allows NASA to achieve a lunar surface mission in 2024 with two new developments, two launches, and seven mission critical operations, similar to the Apollo program. If you assume each event has a 98 percent probability of success, the likelihood of mission success is 80 percent for this Apollo-like approach. In comparison, the likelihood of mission success for NASA’s current approach is 51 percent, not taking into account the launch vehicle maturity risk. NASA can significantly increase speed, simplicity, cost and probability of mission success by deferring Gateway, leveraging SLS, and reducing critical mission operations.