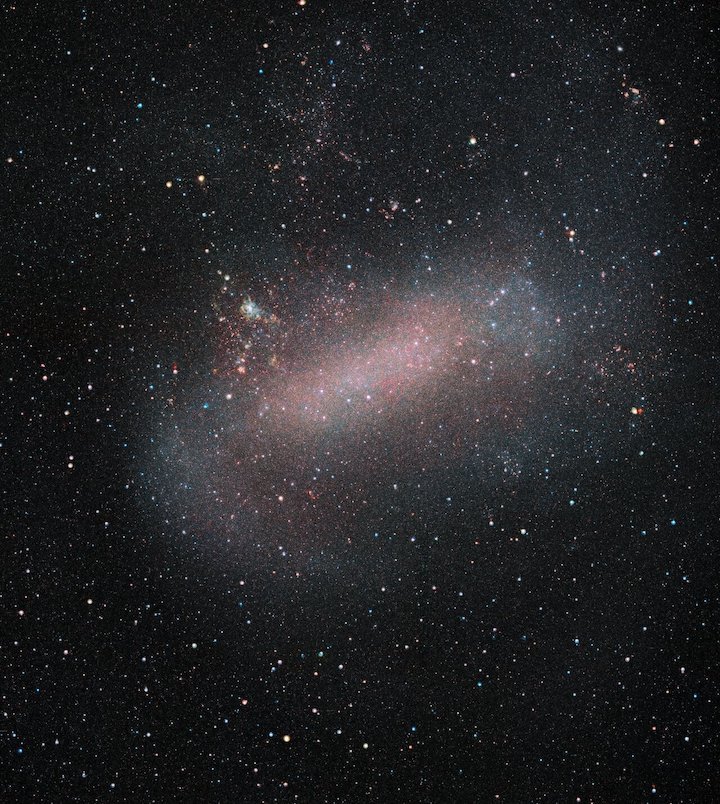 ESO’s VISTA telescope reveals a remarkable image of the Large Magellanic Cloud, one of our nearest galactic neighbours. VISTA has been surveying this galaxy and its sibling the Small Magellanic Cloud, as well as their surroundings, in unprecedented detail. This survey allows astronomers to observe a large number of stars, opening up new opportunities to study stellar evolution, galactic dynamics, and variable stars.

The Large Magellanic Cloud, or LMC, is one of our nearest galactic neighbors, at only 163 000 light years from Earth. With its sibling the Small Magellanic Cloud, these are among the nearest dwarf satellite galaxies to the Milky Way. The LMC is also the home of various stellar conglomerates and is an ideal laboratory for astronomers to study the processes that shape galaxies.

ESO’s VISTA telescope, has been observing these two galaxies for the last decade. The image presented today is the result of one of the many surveys that astronomers have performed with this telescope. The main goal of the VISTA Magellanic Clouds (VMC) Survey has been to map the star formation history of the Large and Small Magellanic Clouds, as well as their three-dimensional structures.

VISTA was key to this image because it observes the sky in near-infrared wavelengths of light. This allows it to see through clouds of dust that obscure parts of the galaxy. These clouds block a large portion of visible light but are transparent at the longer wavelengths VISTA was built to observe. As a result, many more of the individual stars populating the centre of the galaxy are clearly visible. Astronomers analysed about 10 million individual stars in the Large Magellanic Cloud in detail and determined their ages using cutting-edge stellar models[1]. They found that younger stars trace multiple spiral arms in this galaxy.

For millennia, the Magellanic Clouds have fascinated people in the Southern Hemisphere, but they were largely unknown to Europeans until the Age of Discovery. The name we use today harkens back to the explorer Ferdinand Magellan, who 500 years ago began the first circumnavigation of the Earth. The records the expedition brought back to Europe revealed many places and things to Europeans for the first time. The spirit of exploration and discovery is ever more live today in the work of astronomers around the world, including the VMC Survey team whose observations led to this stunning image of the LMC.

[1] Stellar models allow astronomers to predict the life and death of stars, providing insights into properties like their ages, mass, and temperature.

Highlights of the Large Magellanic Cloud 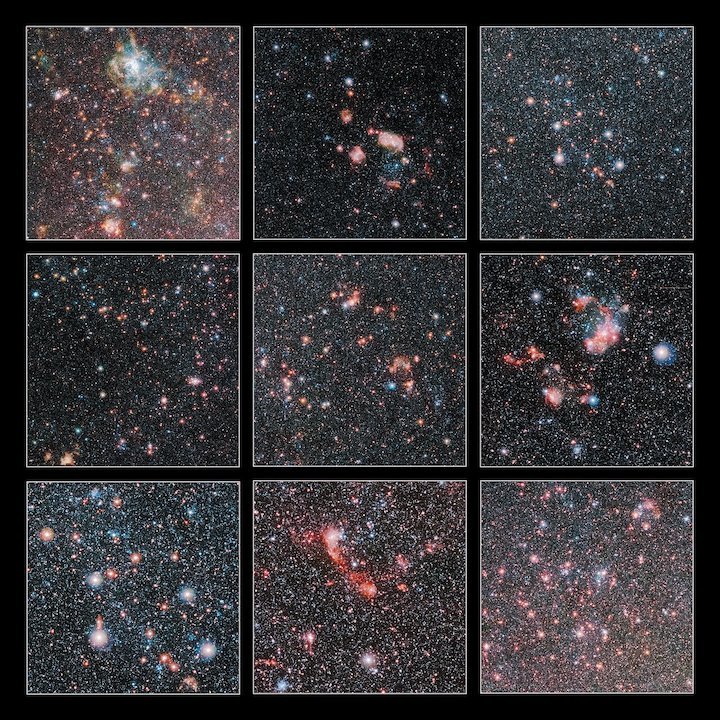 These cutouts highlight some of the most spectacular regions in the Large Magellanic Cloud, which is one of our closest galactic neighbours. The image was taken with the VISTA telescope at ESO's Paranal Observatory.