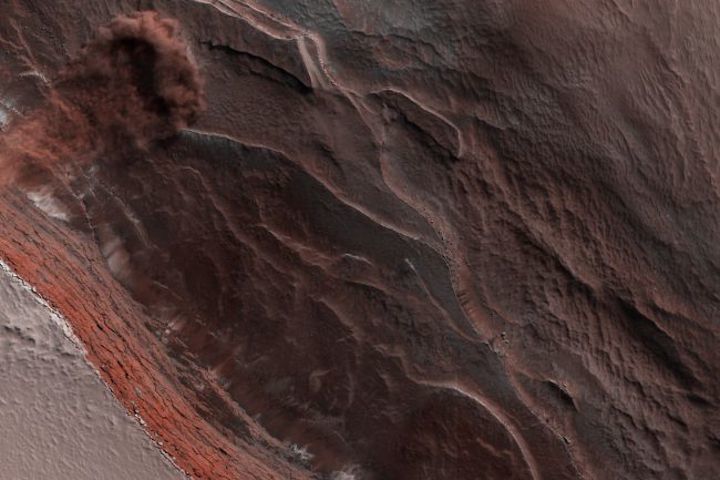 The HiRISE camera aboard NASA's Mars Reconnaissance Orbiter captured this image of an avalanche near the Red Planet's north pole on May 29, 2019.

It's not every day you get to see an avalanche on another world.

We just got this rare treat thanks to NASA's Mars Reconnaissance Orbiter (MRO), which spotted a plume of red dirt billowing into the sky near the planet's north pole in May.

"Every spring, the sun shines on the side of the stack of layers at the north pole of Mars known as the north polar layered deposits. The warmth destabilizes the ice, and blocks break loose," NASA officials wrote in a description of the MRO image, which was released Wednesday (Sept. 11).

"When they reach the bottom of the more than 500-meter-tall [1,650 feet] cliff face, the blocks kick up a cloud of dust," NASA officials added. "The layers beneath are different colors and textures depending on the amount of dust mixed with ice."

MRO captured the image on May 29 using its High Resolution Imaging Science Experiment (HiRISE). This telescopic camera can resolve features as small as a desk on the Martian surface imaged from orbit, NASA officials have said.

MRO has been circling the Red Planet since March 2006, performing a variety of science work on its $720 million mission. For example, MRO hunts for signs of past and present water activity, studies Martian geology and climate, helps relay communications between surface craft and Earth, and scouts out promising landing sites for future missions, both robotic and crewed. (NASA plans to put boots on the Red Planet before the end of the 2030s.)