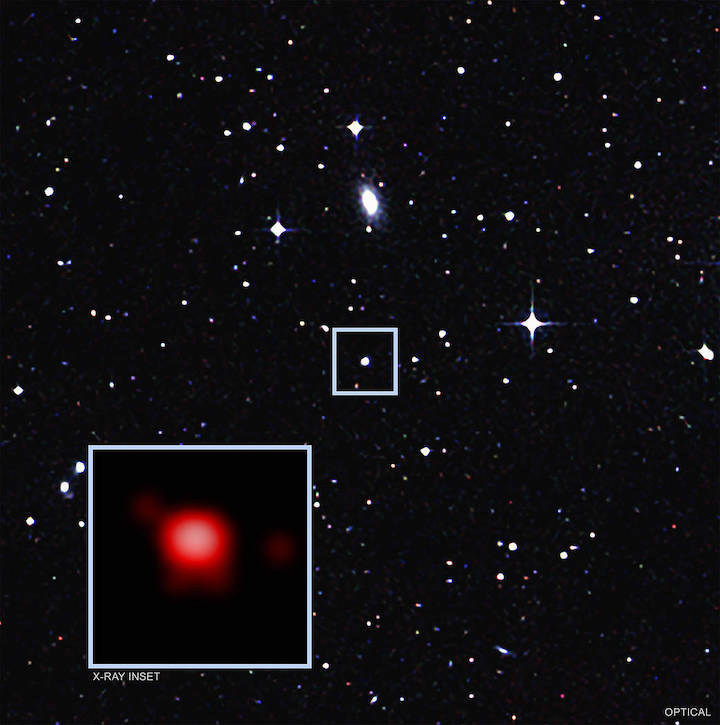 There’s an adage that it’s not healthy to skip meals. Apparently, a supermassive black hole in the center of a galaxy millions of light years away has gotten the message.

A team of astronomers found X-ray bursts repeating about every nine hours originating from the center of a galaxy called GSN 069. Obtained with NASA’s Chandra X-ray Observatory and the European Space Agency’s XMM-Newton, these data indicate that   the supermassive black hole located there is consuming large amounts of material on a regular schedule.

While scientists had previously found two “stellar-mass” black holes (that weigh about 10 times the Sun’s mass) occasionally undergoing regular outbursts before, this behavior has never been detected from a supermassive black hole until now.

The black hole at the center of GSN 069, located 250 million light years from Earth, contains about 400,000 times the mass of the Sun. The researchers estimate that the black hole is consuming about four Moons’ worth of material about three times a day. That’s equivalent to almost a million billion billion pounds going into the black hole per feeding.

“This black hole is on a meal plan like we’ve never seen before,” said Giovanni Miniutti from ESA’s Center for Astrobiology in Spain, the first author of a Nature paper, published today, describing these results. “This behavior is so unprecedented that we had to coin a new expression to describe it: “X-ray Quasi-Periodic Eruptions”.”

ESA's XMM-Newton was the first to observe this phenomenon in GSN 069 with the detection of two bursts on December 24, 2018. Miniutti and colleagues then followed up with more XMM-Newton observations on January 16 and 17, 2019, and found five outbursts. Observations by Chandra less than a month later, on February 14, revealed an additional three outbursts.

“By combining data from these two X-ray observatories, we have tracked these periodic outbursts for at least 54 days” said co-author Richard Saxton of the European Space Astronomy Centre in Madrid, Spain. “This gives us a unique opportunity to witness the flow of matter into a supermassive black hole repeatedly speeding up and slowing down.”

During the outbursts the X-ray emission becomes about 20 times brighter than during the quiet times. The temperature of gas falling towards the black hole also climbs, from about one million degrees Fahrenheit during the quiet periods to about 2.5 million degrees Fahrenheit during the outbursts. The temperature of the latter is similar to that of gas found around most actively growing supermassive black holes.

The origin of this hot gas has been a long-standing mystery because it appears to be too hot to be associated with the disk of infalling matter surrounding the black holes. Although its origin is also a mystery in GSN 069, the ability to study a supermassive black hole where hot gas repeatedly forms then disappears may provide important clues.

“We think the origin of the X-ray emission is a star that the black hole has partially or completely torn apart and is slowly consuming bit by bit.” said co-author Margherita Giustini, also of ESA’s Center for Astrobiology. “But as for the repeating bursts, this is a completely different story whose origin needs to be studied with further data and new theoretical models”.

The consumption of gas from a disrupted star by a supermassive black hole has been observed before, but never accompanied by repetitive X-ray bursts. The authors suggest there are two possible explanations for the bursts. One is that the amount of energy in the disk builds up until it becomes unstable and matter rapidly falls into the black hole producing the bursts. The cycle would then repeat. Another is that there is an interaction between the disk and a secondary body orbiting the black hole, perhaps the remnant of the partially disrupted star.

The Chandra data were crucial for this study because they were able to show that the X-ray source is located in the center of the host galaxy, which is where a supermassive black hole is expected to be. The combination of data from Chandra and XMM-Newton implies that the size and duration of the black hole’s meals have decreased slightly, and the gap between the meals has increased. Future observations will be crucial to see if the trend continues.

Supermassive black holes are usually larger than GSN 069, with masses of millions or even billions of suns. The larger the black hole the slower their fluctuations in brightness will be, so instead of erupting every nine hours they should erupt every few months or years which likely explains why quasi-periodic eruptions where never seen before.

Examples of large increases or decreases in the amount of X-rays produced by black holes have been observed in a few cases, using repeated observations over months or even years. The changes in some objects are much faster than expected by standard theory of disks of infalling matter surrounding black holes, but could be naturally accounted for if they were experiencing similar behavior to GSN 069.