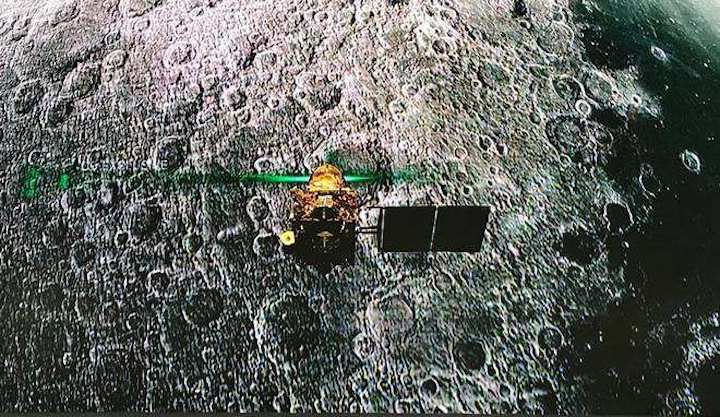 NEW DELHI: Besides Indian Space Research Organisation’s (Isro's) last-ditch effort to establish a communication link with Vikram lander that is lying motionless on the lunar surface after a “hard-landing” on September 7, National Aeronautics and Space Administration (Nasa) has also sent hello messages to the Indian lander on Moon in order to connect with it.
Through its deep space network ground stations, Nasa’s Jet Propulsion labortary had beamed a radio frequency to Vikram in order to establish a contact with the lander. A source in Nasa told TOI, “Yes, NASA/JPL is trying to contact Vikram through its deep space network (DSN) as contractually agreed with Isro.”
The hope of revival of Vikram is getting slim by the day as even 14 Earth days, when the lander will remain exposed to Sun’s rays, will also get over on September 20-21 and thereafter there would be no hope to energise its solar panel.

Another astronomer Scott Tilley also confirmed that Nasa’s DSN station in California had beamed the radio frequency to the lander. Tilley, who earned fame for spotting a Nasa spy satellite IMAGE that got lost in 2005, tweeted, “DSN 24 beams 12KW of RF at the Moon in hopes of stimulating Chandrayaan2's Vikramlander into communicating with home. Here’s a eerie recording of the searcher’s signal reflected off the Moon and back to Earth via EME (Earth Moon Earth) on 2103.7MHz (He attached the recording of the RF signal with his tweet).”

On sending a signal to the lander, Moon acts as a radio reflector and sends back a small portion of that signal that can be detected on Earth after the 8,00,000-km round trip.
To a TOI query, Tilley replied, “DSN 24 has been sending a signal on Vikram Lander’s uplink frequency for the last two days now. I believe other DSN stations have done the same too.”
Nasa’s JPL has DSN ground station in three places —Goldstone, South California (US), Madrid (Spain) and Canberra (Australia). The three stations are located 120 degrees apart on Earth with an aim to ensure that any satellite in deep space is able to communicate with at least one station at all times. Each site contains a minimum of four large antennas – ranging from 26 metre up to 70 metre in diameter – and is capable of providing continuous radio communications with several spacecraft at the same time.
DSN supports Nasa and non-NASA missions that explore the furthest points of our solar system. In fact, Isro had taken the help of NSA’s DSN to track the journey of Chandrayaan-2 integrated module while it was on its way to Moon from Earth’s elliptical orbit.

Why is Nasa showing interest in India’s Chandrayaan-2 mission?
Nasa has been showing a lot of interest in India’s moon mission because of several reasons. First, its “passive payload” laser reflector array was installed on Vikram lander that was meant to track the lander’s exact spot and also calculate the exact distance between Earth and Moon. The distance calculations would have helped Nasa plan its future moon missions better. But after the Vikram had “hard-landed” on Moon, the fate of the Nasa payload, consisting of array of mirrors, is unknown.
Second, Nasa is expecting a lot of significant data from the Chandrayaan-2’s orbiter, which is loaded with eight advanced payloads. It is keenly awaiting for 3D mapping and sharp images of the south pole region of Moon. This is because Nasa has plans to send a manned mission to the south pole by 2024 under its Artemis programme and it wants to enrich its knowledge about that region to plan its mission better.

With China planning to set up a research hub in the south pole of Moon after two or three more lander missions to Moon, the US doesn’t want to stay behind. US President Donald Trump wants Nasa to use the services of private space companies like Elon Musk’s SpaceX and Jeff Bezos’s Blue Origin to make the manned mission to Moon a reality again, over 50 years after the famous Apollo-11 mission that helped the US make history by becoming the first country in the world to land on Moon.
Nasa’s current budget is $21.5 billion, and the Trump administration is seeking another $1.6 billion for the current fiscal year to fund its return to Moon.
Quelle: The Times of India
+++

ISRO screens show communication with Vikram lander was lost at 335 m, not 2.1 km

New Delhi: Indian Space Research Organisation (ISRO) in its official statement on September 6 had said: "normal performance (of Vikram) was observed up to an altitude of 2.1 km and subsequently, communication from Lander to the ground stations was lost."

However, data captured on screens at Mission Operations Complex at ISRO's Telemetry Tracking and Command Centre which are the basis of ISRO's analysis show that communication was lost when the lander was barely 335 m (0.335 km) from the surface of the moon, Indian Express reported.

The screens show a green dot which represents the lander. The data suggests that it started to deviate from the time its altitude was just above 2 km and continued to deviate before stopping at a point that is clearly below 1 km and near or below 500 m.

According to the data, failure in the "fine braking phase" was observed at the final part of Vikram's journey (an altitude of 5 km- 400 m).