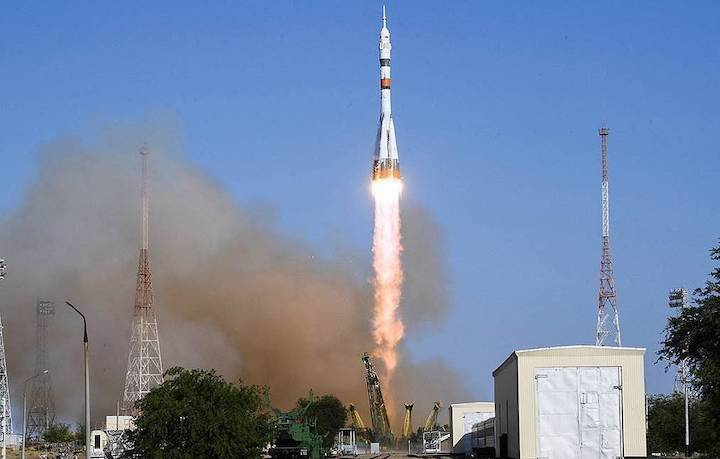 According to NASA live broadcast, the docking of Soyuz-MS-14 was canceled when the spaceship was at a distance of only 60 meters from the ISS
Russia’s Mission Control Center will make a second attempt to dock the Soyuz MS-14 spacecraft with the International Space Station (ISS) on the morning of August 26, First Deputy General Designer of Russia’s Energia Space Rocket Corporation Vladimir Solovyev, told reporters. Solovyev is responsible for flights of the Russian segment of the ISS.

"Now we plan to conduct the repeated docking on the night of Sunday to Monday, around 8-9 in the morning of August 26," Soloviev said.

The astronauts on board the ISS have been instructed to replace the amplifier of the Kurs system on board the station in which the failure was recorded.

Earlier the announcer said that the aborted docking of the Soyuz MS-14 spaceship might be caused by a problem with an amplifier of the Kurs navigation system located on the ISS.

The spacecraft with a robot on its board was set to dock with the International Space Station at 08:31 Moscow time on August 24 after a two-day flight.

If the attempt is successful, experts plan to return the aircraft back to Earth on September 7, 2019, First Deputy General Designer of Russia’s Energia Space Rocket Corporation Vladimir Solovyev said

The state commission has decided to perform the next attempt to dock the Soyuz MS-14 spacecraft carrying the Fedor android robot to the International Space Station (ISS) on the morning of August 27, First Deputy General Designer of Russia’s Energia Space Rocket Corporation Vladimir Solovyev said during a conversation with Russian ISS astronauts transmitted by NASA on Saturday. Solovyev is responsible for flights of the Russian segment of the ISS.

"In the early hours of Monday, we will carry out correction works on the Soyuz carrying Fedor in the interest of performing the docking on Tuesday, August 27. It [the next attempt to dock Soyuz MS-14 to the ISS] will take place around 8-9 am Moscow time," Solovyev said.

He noted that if the attempt is successful, experts plan to return the aircraft back to Earth on September 7, 2019. "We would like to maintain the return date - the early hours of September 7," he said.

Earlier, Solovyev informed that the next docking attempt would take place on August 26.

The spacecraft with a robot on its board was set to dock the International Space Station at 08:31 Moscow time on August 24 after a two-day flight.

The robot Fedor (Final Experimental Demonstration Object Research or FEDOR) has been developed by Android Technology Company and the Advanced Research Fund on a technical assignment from Russia’s Emergencies Ministry.

The android robot has received its own name of Skybot F-850 where the letter F stands for its affiliation with the Fedor family of robots.

As Roscosmos Chief Dmitry Rogozin said, the Skybot F-850’s basic goals include transmitting telemetry data, determining parameters related to the flight safety, including overloads, and carrying out experiments to test the robot’s operations useful on the external side of the space station. 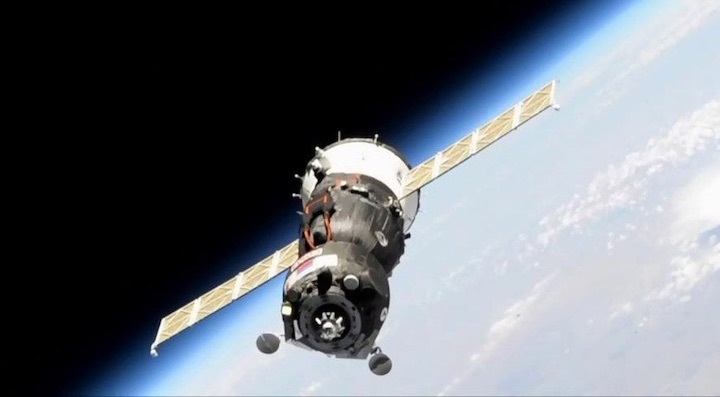 WASHINGTON — A rare uncrewed flight of a Soyuz spacecraft took another twist Aug. 24 when the spacecraft failed to make an automated docking with the International Space Station.

NASA said in a later statement that the station’s two Russian cosmonauts, overseeing the docking, issued a command to abort the docking at 1:36 a.m. Eastern, directing the Soyuz to move away from the station. The ISS, NASA added, was never in danger during the aborted docking attempt.

The problem, Russian flight controllers said, appears to be a problem with the Kurs automated docking system on the ISS, and not a problem with the Soyuz spacecraft itself. Roscosmos, in a brief statement after the aborted docking, said that the agency’s leader, Dmitry Rogozin, chaired a meeting to discuss the problem and determine what to do, but provided few additional details about the problem.

Original plans called for cosmonauts Alexey Ovchinin and Alexander Skvortsov to replace a signal amplifier unit on the Kurs over the weekend, and prepare for another docking attempt Aug. 26. However, in a series of English-language tweets later in the day Aug. 24, Roscosmos said the next docking attempt will be pushed back to Aug. 27.

Instead, Skvortsov will board the Soyuz MS-13 spacecraft currently docked to the station’s Zvezda module Aug. 26 and manually dock it to the Poisk module. That will free up the Zvezda module’s port for a new docking attempt by Soyuz MS-14. “The situation is complicated, however [it] is under control,” Roscosmos stated.

The delayed docking doesn’t pose an issue for the station or its crew, in part because this Soyuz spacecraft carried no one on board. The flight, the first uncrewed Soyuz spacecraft flight since the Soyuz TM-1 mission to the Mir space station in 1986, was intended to test the use of the Soyuz-2.1a launch vehicle for launching Soyuz spacecraft, as Russia seeks to phase out the older Soyuz-FG rocket that it has been using for crewed missions by 2020.

The Soyuz-2.1a, used for satellite launches as well as some Progress cargo missions, has a new digital flight control system and upgraded engines. The launch, at 11:38 p.m. Eastern Aug. 21 from the Baikonur Cosmodrome, was a success.

The mission also provided an opportunity to test changes to the Soyuz spacecraft itself, including improvements to its navigation system and descent control system. Those systems did not appear to be at fault in the aborted docking.

While there are no astronauts on the Soyuz MS-14, it does have a passenger or sorts: a humanoid robot known alternatively as FEDOR or Skybot F-850. Roscosmos plans to test the ability of the robot to support cosmonauts on the ISS during a relatively short stay on the station, before Soyuz MS-14 returns to Earth in early September.