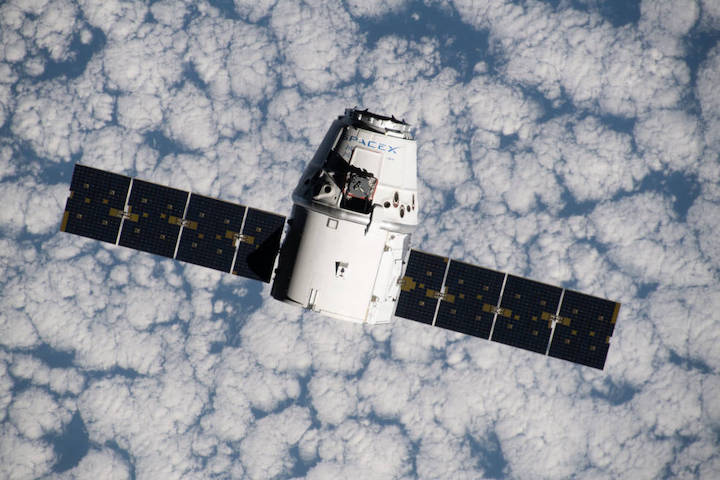 A SpaceX Dragon spacecraft approaches the International Space Station July 27, 2019, on the company's 18th cargo delivery to the space station as it orbits 265 miles above the Atlantic Ocean, off the west coast of Namibia.
Credits: NASA

Filled with almost 2,700 pounds of valuable scientific experiments and other cargo, a SpaceX Dragon resupply spacecraft is set to leave the International Space Station Tuesday, Aug. 27. NASA Television and the agency’s websitewill broadcast its departure live beginning at 10:15 a.m. EDT.

Robotic flight controllers at mission control in Houston will issue remote commands at 10:42 a.m. to release Dragon from the Earth-facing port of the Harmony module using the station’s Canadarm2 robotic arm. Expedition 60 Flight Engineer Christina Koch of NASA will back up the ground controllers and monitor Dragon’s systems as it departs the orbital laboratory.

Dragon will fire its thrusters to move a safe distance from the station, then execute a deorbit burn around 3:22 p.m. as it heads for a parachute-assisted splashdown around 4:21 p.m. in the Pacific Ocean, some 300 miles southwest of Long Beach, California. The deorbit burn and splashdown will not air on NASA TV.

Bio-Mining in Microgravity
The Biorock investigation provides insight into the physical interactions of liquid, rocks and microorganisms in microgravity and improving the efficiency and understanding of mining materials in space. Bio-mining eventually could help explorers on the Moon or Mars get needed materials on site, lessening the need for precious resources from Earth and reducing the amount of supplies explorers must take with them.

Mechanisms of Moss in Microgravity
Space Moss compares mosses grown aboard the space station with those grown on Earth to determine how microgravity affects its growth, development, and other characteristics. Tiny plants without roots, mosses need only a small area for growth, an advantage for their potential use in space and future bases on the Moon or Mars. This investigation also could yield information that aids in engineering other plants to grow better on the Moon and Mars, as well as on Earth.

Improving Tire Manufacturing from Orbit
The Goodyear Tire investigation uses microgravity to push the limits of silica fillers for tire applications. A better understanding of silica morphology and the relationship between silica structure and its properties could provide improvements for increased fuel efficiency, which would reduce transportation costs and help to protect Earth’s environment.

These are just a few of the hundreds of investigations aimed at keeping astronauts healthy during space travel and demonstrating technologies for future human and robotic exploration beyond low-Earth orbit, including missions to the Moon by 2024 and on to Mars. Space station research also provides opportunities for other U.S. government agencies, private industry, and academic and research institutions to conduct microgravity research that leads to new technologies, medical treatments, and products that improve life on Earth.

For more than 18 years, humans have lived and worked continuously aboard the International Space Station, advancing scientific knowledge and demonstrating new technologies, making research breakthroughs not possible on Earth that will enable long-duration human and robotic exploration into deep space. A global endeavor, more than 230 people from 18 countries have visited the unique microgravity laboratory that has hosted more than 2,500 research investigations from researchers in 106 countries.