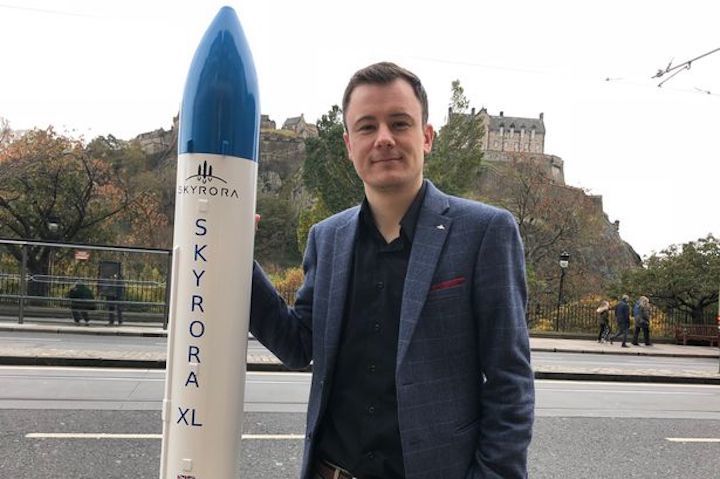 Interview With two launches of the SkyLark Nano under its belt, Skyrora aim to go orbital in the coming years - assuming UK Parliament keeps up. The Register had a chat with the Brit rocketeer at its Edinburgh HQ to learn more.

The two-metre solid fuel-powered Skylark Nano was launched this month, hitting an altitude of 6km and a speed of over 1,800kph. It was a repeat performance, with engineers using the mission to check the maths behind their trajectory calculations.

The rocket, which was recovered by parachute, can be viewed at the Bayes Centre during the Edinburgh Festival.

The company plans to take things a bit further by the end of the year, according to communications manager Katie Miller.

Describing Skyrora as "a private company that wishes to conduct commercial launches", Miller laid out the outfit's ambitious plans for the next three years.

While the gang could fire off the Nano again, Miller told us: "We want to start launching the higher rocket," which means moving on to the Skylark Micro. Standing at four metres high, the Micro is a two-stage solid rocket which should fly to an altogether more impressive 30km and be able to image the curvature of the Earth.

"Skylark Micro," said Miller, "is ready to launch, and is waiting in our production facility."

With just the paperwork outstanding ahead of a 2019 launch, the company plans to use the Micro to understand the dynamics of rocket stage separation before proceeding to a launch of the next evolution: the SkyHy.

The SkyHy is another two-stage beast, this time standing six metres tall, and expected to reach an altitude of 90km – into space, if you take Virgin Galactic's definition, or the edge of space if you stick with the more sober Skyrora's take on things.

While SkyHy will continue to use solid fuel, the company's focus will be on the oxidiser, which Miller told us would be hydrogen peroxide. This, coupled with kerosene, will form the propellant for the altogether more interesting Skyrora 1 (or SK-1).

It'll be a first for a commercial launcher from UK soil, but Miller cautioned that the location is yet to be confirmed.

And confirmed it must be, because things get serious in 2020 for Skyrora with the launch of SK-1, which stands at 11 metres. Still sub-orbital, although capable of carrying up to 100kg on a 90km lob, according to Miller, the single stage SK-1 will represent the first use of both the hydrogen peroxide and kerosene fuel and engine that will go on to power the orbital class XL.

By 2022, assuming the UK government has sorted out the requisite legislation to allow such shenanigans to happen on UK soil, the company plans to send the Skyrora XL into orbit.

The XL will be a three-stage rocket, standing 23m tall. The first stage will be powered by nine of the company's 3D-printed rocket engines with the second and third stages enjoying an engine apiece. That third-stage engine will present the greatest challenge, since Skyrora will be restarting it several times to ensure satellites get to their desired orbit.

The XL should be capable of placing a 315kg payload into a 500km orbit; still small-sat territory, but comfortably ahead of rivals such as Rocket Lab.

And as for the 3D printing? Miller ruefully told us: "One of the challenges that we have is actually that we can't find a 3D printer that will print our engines fully. So, we have to 3D print our engine parts and then weld them together."

An example of the first-stage engine was recently successfully test fired at the company's Cornwall facility.

While discussions concerning where the company will launch from are ongoing, a Scottish spaceport would be ideal as Miller explained: "It's really great because of the trajectory analysis. Also, because there's lots of sea and uninhabited land, which makes it really ideal."

And, of course, with the company hoping to bring rocket production to the North Berwick area, and the UK spanking millions on Sutherland spaceport alone, Scotland would be a handy location.

A lot does, however, depend on the UK government getting its act together to implement the Space Industry Act to allow private companies like Skyrora to launch into space from British soil.

The UK Space Agency told us: "The Space Industry Act 2018 is a major step towards establishing a safe and supportive regulatory framework to enable launches to take place from the UK. The government is working at pace to develop the detailed regulations to implement the Act with industry and other interested parties, and we anticipate the secondary legislation will be in place by early 2021."

While the UK Parliament is a little preoccupied with other matters at present, getting the legislation passed in that time frame will certainly be a challenge.

With rivals such as Rocket Lab already flying, and others such as Vector Launch apparently struggling, privately funded Skyrora reckons there is still plenty of work to go around, particularly with the UK looking to snaffle at least 10 per cent of the lucrative small satellite market.

And with 20 letters of intent in the bag, a 2020 SK-1 and 2022 XL launch from UK soil look very possible. Assuming the UK government pulls its collective finger out.