Carbondale, Illinois, was in the path of the 2017 total solar eclipse and will also catch the 2024 event.

Wednesday (Aug. 21) marked the two-year anniversary of the Great American Solar Eclipse, and if you are eager to view the next celestial sensation to cross the North American skies, get ready for another eclipse treat on April 8, 2024.

According to a study led by researchers at the University of Michigan last summer, about 88% of American adults viewed the total solar eclipse in 2017 either directly or digitally. The total solar eclipse could be seen from Oregon to South Carolina along a 70-mile-wide (113 kilometers) path that appeared for up to 2 minutes and 40 seconds as the moon passed between the Earth and the sun, blocking all of the sun's light, so that only its ethereal coronal halo could be seen. Outside of the path of totality, skywatchers got to enjoy the sight of a "bite" being taken out of the sun.

The 2017 solar eclipse was the first in nearly a century to cross the entire contiguous United States, the previous one having occurred in 1918. Although the 2024 solar eclipse won't travel coast to coast within the United States, it will sweep across the North American continent, beginning in Mexico and traveling northeast toward Canada. 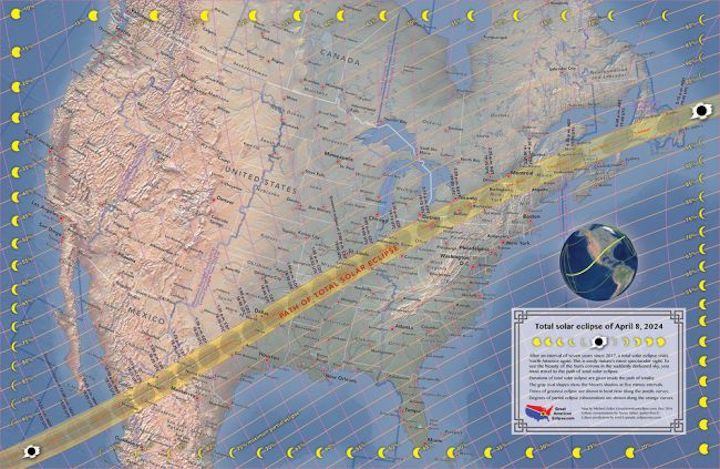 Solar eclipses are possible thanks to a coincidence: The moon, as seen from Earth, is almost the exact same size as the orb of the sun. The moon varies in its distance from our planet, and when it passes in front of the sun at a point when it's farther from Earth than average, the moon's apparent smaller shape doesn't block the entire sun, and people on Earth view an annular solar eclipse, in which the sun appears like a thick ring in the sky.

While an annular eclipse is still an amazing sight, the showstopper is the total solar eclipse, which occurs when the moon is closer to Earth. The coronal spectacle that totality reveals is so beautiful that people chase eclipses across the world: Total solar eclipses produce a 360-degree sunset in the sky, planets and stars appear, and plants and animals change their behaviors because they think it's nighttime.

As a reminder, people should always use protective solar eclipse eyewear when viewing a solar eclipse; sunglasses and squinting do not keep your eyes safe.

The 2024 eclipse will be the first total solar eclipse to pass over the continental United States since the 2017 event. While people in some lucky places like Carbondale, Illinois, got to see the 2017 eclipse and will also enjoy the 2024 eclipse, those living in most places along the 2024 path of totality saw only a partial eclipse in 2017.

The 2024 path makes landfall in North America over the Mexican state of Sinaloa, then enters the U.S. through Texas and travels over Oklahoma, Arkansas, Missouri, Indiana, Ohio, New York, Vermont and Maine. It continues on through Canada, making an appearance over places like Montreal and Fredericton in New Brunswick.

For those not in the path of totality, museums and community centers like libraries usually host events where people can enjoy the eclipse remotely. Often, institutions as well as online celestial subscription services like Slooh also offer live streaming of the event with commentary from eclipse experts. 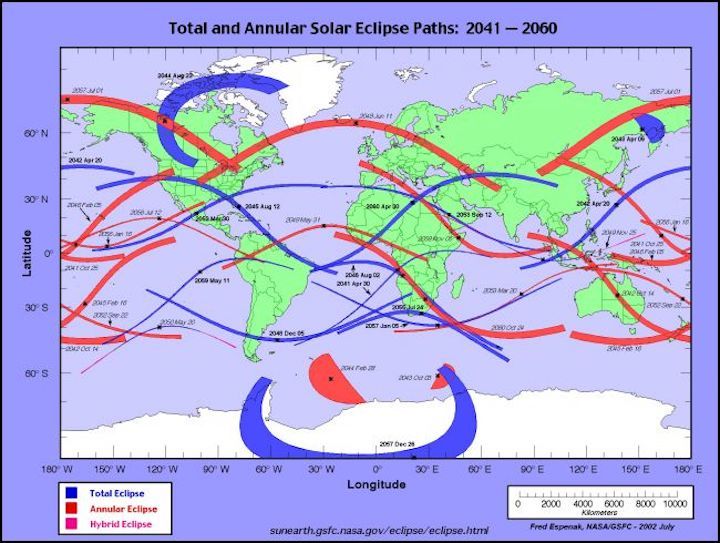 While we can't predict what the weather will be like for an eclipse that's five years away, Williams College astronomer Jay Pasachoff told Space.com in a recent email that Texas will probably offer the best weather for viewing the eclipse in the U.S. "I see that the average cloudiness over the path of totality for 2024 is much greater in the Midwest and in [the] northeast of the United States, so Texas may have a higher chance of clear weather, and Mexico should have an even higher chance of clear weather," he said.

During the 2024 total solar eclipse, also look for the wisps and flares that emanate from the sun. When the moon blocks the body of the sun, the star's outer atmosphere, the corona, becomes visible. And since the sun goes through a regular 11-year activity cycle, the shapes of these formations in 2024 will likely differ from what viewers caught two years ago.

"We are now at the minimum of the sunspot cycle, so this latest eclipse [on July 2 in South America] had streamers only out of the sides of the sun, along the solar equator, and we could see the plumes going out of the top and bottom of the sun," Pasachoff said. "By the time of the 2024 total solar eclipse, there will be many more sunspots on the sun, which will lead to high-latitude coronal streamers, which will probably mask the polar plumes."

After the 2024 total solar eclipse, the next such event visible from the U.S. won't appear until 2044. But there will be another one the following year, too, in 2045.