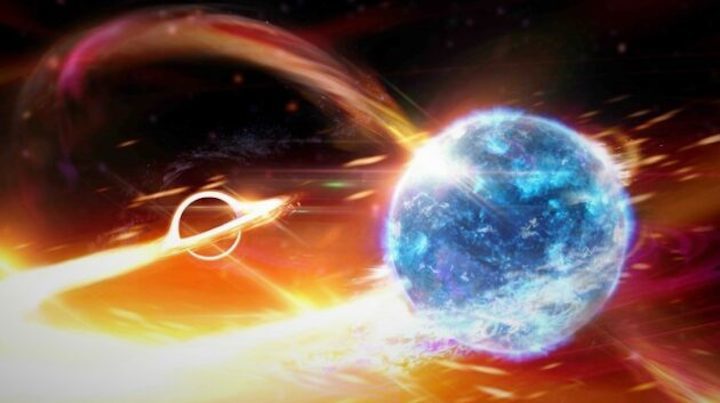 The Laser Interferometer Gravitational-Wave Observatory, or LIGO,  has detected mergers of black holes, and even a couple of neutron star smash-ups. But it hasn’t yet confirmed the signature of a black hole gobbling a neutron star.

That could soon change.

Over the past week, physicists have been buzzing over an Aug. 14 detection made by the twin LIGO detectors in Hanford, Wash., and Livingston, La., as well as by the European Virgo gravitational-wave detector in Italy. Those L-shaped facilities monitor ever-so-slight fluctuations in laser beams to look for wobbles in spacetime caused by passing gravitational waves.

The types of waves that LIGO and Virgo detect are given off only by violent cosmic events such as supernova explosions and cataclysmic collisions. LIGO’s first black hole detection, made in 2015, earned the Nobel Prize in physics two years later. More such detections have been made since then.

Detecting the first neutron star merger, and matching that event up with multispectral observations from a wide array of telescopes, marked another milestone in 2017. Neutron stars are the super-dense stellar cores that are left behind when stars bigger than our sun burn out and collapse.

Picking up on the collision of a neutron star and a black hole would complete a gravitational-wave trifecta. LIGO’s team thought they might have detected such a smash-up back in April, but the signal was weak and couldn’t be confirmed.

Astronomers say the Aug. 14 detection, known as S190814bv and traced to a source roughly 900 million light-years away, could be the one. The signal was significantly stronger this time. The current best guess is that one of the objects in the collision is more than five times as massive as our sun, and the other object has less than three times the sun’s mass.

Those masses roughly match up with what’s thought to be small black hole on one hand, and a big neutron star on the other.

“Scientists have never detected a black hole smaller than five solar masses, or a neutron star larger than about 2.5 times the mass of our sun. Based on this experience, we’re very confident that we’ve just detected a black hole gobbling up a neutron star,” Susan Scott, an astronomer at the Australian National University’s Research School of Physics, explained in a news release.

Scott said such a black hole would behave like a cosmic Pac-Man, “possibly snuffing out the star instantly.”

Physicists say there’s more than a 99 percent chance that the event involved a black hole and a neutron star. “However, there is the slight but intriguing possibility that the swallowed object was a very light black hole – much lighter than any other black hole we know about in the universe,” said Scott, who leads ANU’s General Relativity Theory and Data Analysis Group.

“That would be a truly awesome consolation prize,” she said.

The teams at LIGO and VIRGO are currently refining their mass estimates and trying to hunt down observations from other instruments. Scott said the ANU SkyMapper Telescope responded to the detection alert and scanned the area of sky surrounding the source of the event, “but we’ve not found any visual confirmation.”

Whatever S190814bv turns out to be, it’s sure to be one for the books. Here’s how the LIGO team summarized what’s known about the event on Twitter: 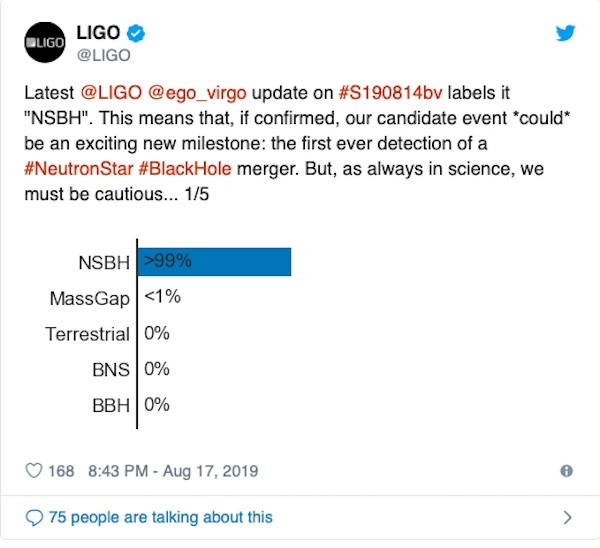 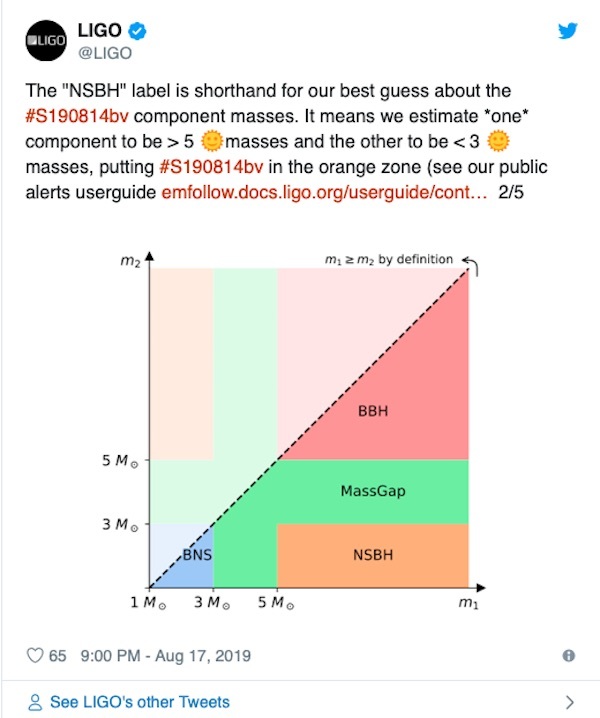 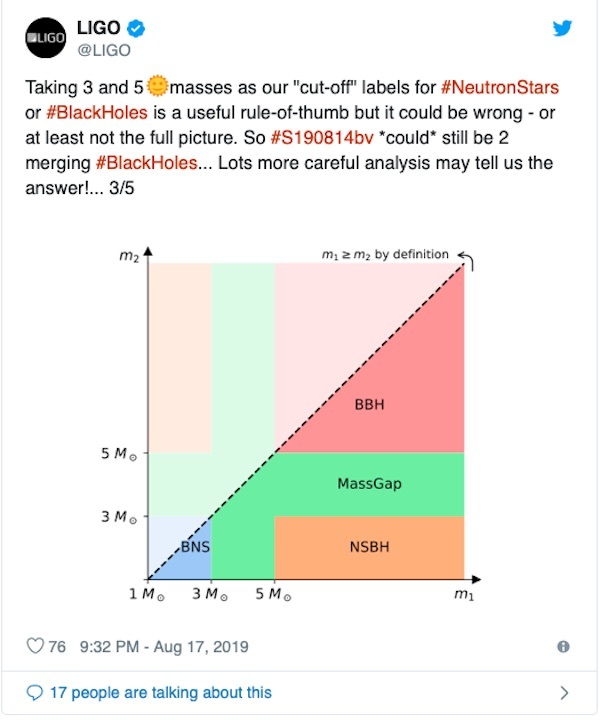 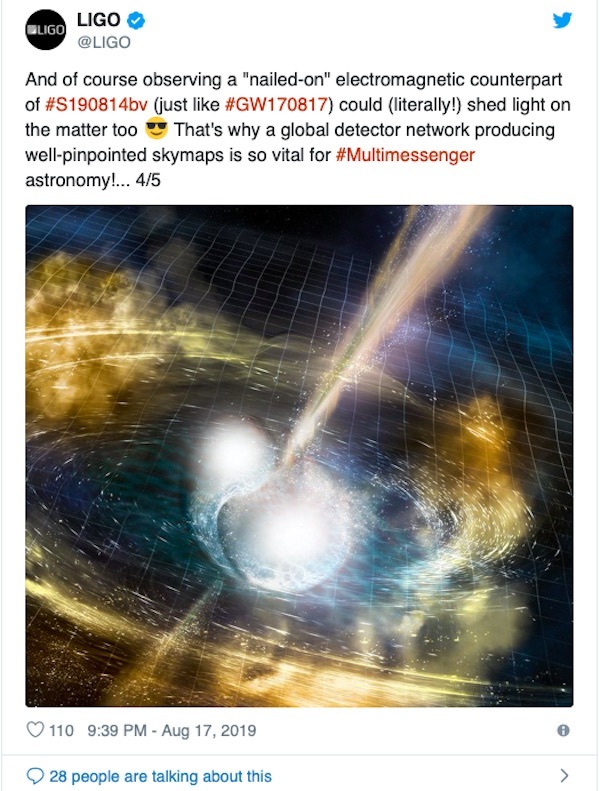 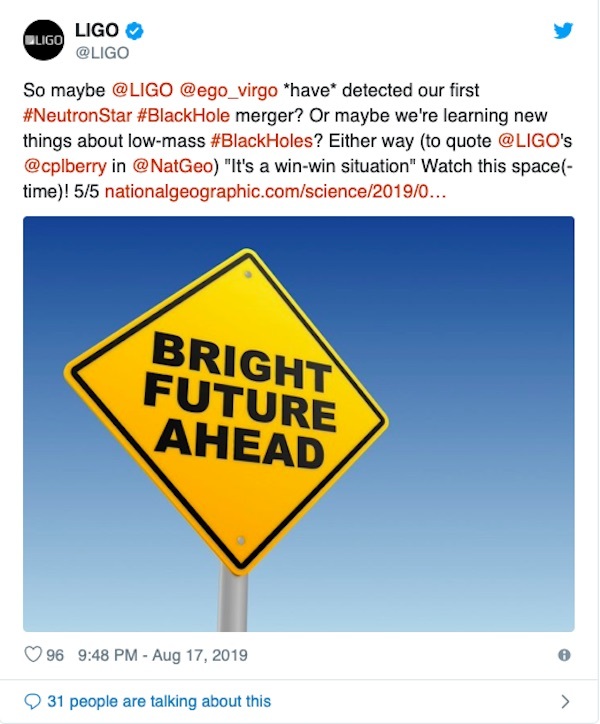